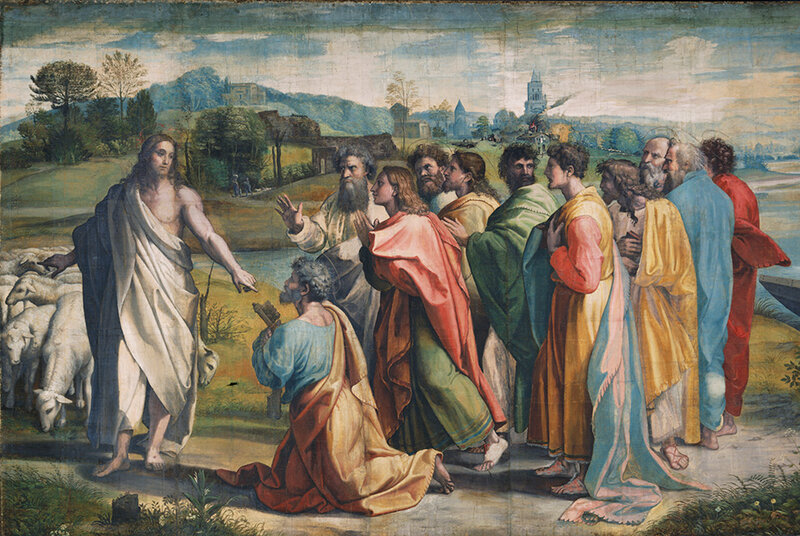 LONDON.- In 2020, the V&A will mark the 500th anniversary of Raphael’s death by transforming the way museum visitors experience the iconic Raphael Cartoons, loaned to the V&A from the Royal Collection by Her Majesty The Queen.

The Raphael Court – home to the Cartoons – will be refurbished from 27 January 2020 until late 2020 when it will reopen as a revitalised space. The V&A has appointed award-winning practice Feilden Clegg Bradley Studios as the 3D designers for the refurbishment, and lighting designers ZNA who will create an innovative new lighting scheme. State-of-the-art LED lighting will reduce reflections on the glass and produce a marked increase in visibility of the works. Following an extensive photography project, enhanced gallery interpretation will also reveal in-depth stories about the production and history of the Raphael Cartoons. High-definition images, infra-red and 3D scans of the Cartoons will be available in the gallery as well as online, enabling the public to explore the Cartoons in unprecedented detail and deepening access to these unique and monumental works of art. The Raphael Cartoons are considered among the greatest treasures of the Renaissance. In 1515, Pope Leo X commissioned Raphael to create a set of ten full-scale designs for a series of tapestries for the Vatican’s Sistine Chapel, illustrating scenes from the lives of Saint Peter and Saint Paul. Once complete, the Cartoons – each measuring around 5 metres wide and 3. 5 metres high – were sent to the workshop of merchant-weaver Pieter van Aelst in Brussels, which transformed the monumental designs into tapestries. Seven of the Cartoons survive to this day, brought to Britain in the 17th century by the Prince of Wales, later Charles I. They remained in the Royal Collection and were loaned to the South Kensington Museum – now the V&A – by Queen Victoria in 1865 in memory of Prince Albert, where they have been on public display ever since.

New interpretation will explore the significance and status of the Cartoons – their function as full-scale tapestry designs for the Sistine Chapel, the ingenuity of Raphael and his workshop, the rescue, life and status of the Cartoons in England in the 17th century, and the fascination they have provoked since then up to the present day. The original set of tapestries for the Sistine Chapel is still on view in the Vatican palace in Rome, while an example of a later tapestry made in the 17th century in England after Raphael’s design – The Miraculous Draught of Fishes, on loan from the Duke of Buccleuch – is on display in the Raphael Court. In August 2019, the V&A and Royal Collection Trust worked with Factum Foundation and Momart to carry out the extensive photography project, supported by the Royal Commission for the Exhibition of 1851. This involved unframing each Cartoon to capture three-dimensional scans, infra-red and high resolution panoramic photography, while also carrying out conservation checks, and glass and frame cleaning. Each 3D image took over 95 hours to capture and they reveal the Cartoons’ unique surface texture. The resulting high-definition images will be available both in the gallery and online, allowing visitors to uncover the complex process of their making and zoom in to view and appreciate composition details and the paper’s intricate surface up close.

Dr Ana Debenedetti, Lead Curator of the Raphael Project and Curator of Paintings at the V&A said: “The set of seven surviving tapestry Cartoons by Raphael comprise a unique Renaissance treasure, both in terms of aesthetic value and technical achievement. The new pioneering photography project will provide the means to visually reveal the hidden process behind the making of the Cartoons, from the extraordinary assemblages of nearly 200 sheets of paper to the underdrawing and final painting stage. The outcome is one of the greatest examples of artistic collaboration and team work executed by a number of highly gifted assistants, which would not be possible without the guidance of such a visionary mind as Raphael’s.” One of the V&A’s largest and most dramatic galleries, the Raphael Court is almost identical in proportions to the Sistine Chapel and was last refurbished from 1992 to 1996. A full redecoration of the space in 2020 as part of the V&A’s FuturePlan programme will highlight the Raphael Cartoons within the space, using a darker colour paint on the walls to help focus the eye on the Cartoons’ vibrant palette. Accompanied by new furniture, together with enhanced lighting and graphic and digital interpretation, the refreshed space will heighten our visitors’ viewing experience and their enjoyment of these iconic works of art.

The refurbishment of The Raphael Court is supported by Lydia and Manfred Gorvy, Julia and Hans Rausing, American Express, the Royal Commission for the Exhibition of 1851, The Hintze Family Charitable Foundation, the Robert H. Smith Family Foundation, the American Friends of the V&A, and many other generous donors. Raphael Cartoon, The Conversion of the Proconsul or The Blinding of Elymas: Acts Chapter 13: Verses 6–12, by Raphael, 1515 – 16, Italy. Museum no. ROYAL LOANS.8. © Victoria and Albert Museum, London.