To be unveiled at Sotheby's: One of the greatest collections of Orientalist paintings ever assembled

To be unveiled at Sotheby's: One of the greatest collections of Orientalist paintings ever assembled

LONDON.- Precious records of the history of the Islamic world, Orientalist paintings provide a unique window into a realm that has forever changed, capturing in technicolour detail every aspect of life in the region.

This autumn, visitors to Sotheby’s London galleries will experience every facet of daily life in the Arab, Ottoman, and Islamic worlds through the paintings of the renowned Najd Collection. Recorded in a publication that today stands as one of the leading resources for Orientalist art, the Najd Collection enjoys a celebrated status. Though certain paintings from the 155-strong collection have occasionally been exhibited in leading institutions around the world, this superlative assemblage of works has never before been displayed in its entirety.

Beginning on October 11th this year, the Najd Collection will be unveiled to the public for the very first time – coinciding with the British Museum’s ‘Inspired by the East’ exhibition. This unprecedented exhibition will be followed by a dedicated evening sale of forty select paintings from the collection on October 22nd. Carrying an estimate of £25.1 – 38.8 million, the sale will be the highest-value ever staged in this category.

In the early to mid-1980s, one collector, driven by an informed passion to build a panoptic picture of society of the region a century or more ago, assembled the Najd Collection. Eager to look beyond the confines of their own Western experience, the artists represented throughout the Najd Collection travelled to and spent time in North Africa, the Ottoman Empire and the Middle East to portray first-hand what they saw and experienced. The legacy of their work has provided an invaluable documentary narrative of regions that have since been transformed by modernisation and, in some cases, conflict.

Artists in the Muslim world were not working in the same representational, figurative tradition as Western painters. Therefore, beyond the detail captured in Orientalist paintings, very few other visual records from the period capture the mores and manners of this part of the world in the nineteenth century.

Claude Piening, Sotheby’s Head of 19th Century European Paintings, London, said: “This is without doubt one of the greatest collections of Orientalist paintings in existence, and it is a real privilege – and indeed career highlight – to be able to exhibit the collection to the public in its entirety for the first time in its history. What strikes me the most is the visionary thought that underpinned the choice of images, made with a view to building a true social history of the Islamic world a century or more ago. Every single work in the exceptional collection puts the figure at its centre, and so together the group is defined by individuals, or groups of individuals, engaging with one another in everyday settings, travelling, praying, trading, or simply socialising – evoking the richly layered narrative of the cultures these artists encountered.”

Arguably the most famous of all the Orientalist painters, Gérôme travelled frequently to Turkey and Egypt. Though he was not averse to mixing fantasy with reality, paintings like this one would have been unthinkable without relying on a first-hand knowledge of the region. Gérôme first travelled to the Egyptian desert in 1856. It was a journey that left an indelible impression on him; he was overwhelmed by its scale, its beauty and its pitiless harshness, and he harboured the utmost respect for all those who braved it. All his impressions are captured in this painting, which exhibits a narrative and cinematic vision that characterises the very best of Gérôme’s oeuvre. Painted just a year after the opening of the Suez Canal, at a moment when the Orient was quickly becoming more accessible, this brilliant, compelling work captures an aspect of that world that remains forever timeless. Prayers in the Mosque, among Gérôme’s most popular works, is part of a series of paintings depicting Muslim men at prayer. The figures are executed with the artist’s usual documentary care: the men face east, towards Mecca, and between them demonstrate each of the ritual postures associated with the prayer. In reality, all of the worshippers would follow the different positions in unison. However, a manipulation such as this would have been a deliberate choice by the artist to illustrate to audiences at home, in the space of one canvas, the prayer’s consecutive stages. Austrian artist Ludwig Deutsch devoted himself almost exclusively to painting the types he witnessed during several trips to Cairo, masterfully capturing every detail of their costumes and physiognomy. Like many of his contemporaries, Deutsch relied on early photographs to ensure his renderings of local architectural features were as accurate as possible. In fact, in his Paris studio he surrounded himself with photographs, Islamic tiles, furniture, textiles and metalwork to ensure that not a single detail escaped his attention. The Tribute is one of Deutsch’s most ambitious works and the highest estimated picture by the artist to appear at auction. Rich in detail, the painting depicts a cortège of four figures approaching an entrance of a palace guarded by a sentinel, as they seek to pay their tributes. Deutsch’s painstakingly detailed style is evident in every object, from the soldier’s peacock-feather helmet and ivory-hilted dagger to the bearded elder’s elaborately patterned turban and babouche slippers. The Scribe depicts a public letter-writer, who is shown sitting in the street in a meditative pose outside his house waiting for passing trade. At that time society placed a high value on literacy and the subtleties of elegant calligraphy, and public scribes such as these were highly esteemed individuals. Celebrated for his masterfully observed single figures, Deutsch employed a rigorous technique and likely used a magnifying glass to achieve the extremely fine level of detail evident in this work. The painting depicts a proud and richly decorated sentinel, standing alert and brandishing a long Ottoman staff, with a cluster of weapons at his disposal. The Morning Prayer is a powerful and noble evocation of the rites and religion of the Muslim world, depicting a man absorbed in prayerful contemplation facing towards the Kaaba in Mecca. Rather than focusing on subjects with a narrative or anecdotal quality, Deutsch took a far more modern approach – often described as documentary realism – by isolating and scrutinising particular moments in time. Painted in 1879, this work was inspired by Frederick Arthur Bridgman’s only trip to Egypt. The composition focuses on a meeting between the master of the house, surrounded by family and advisers, and an envoy bearing a letter. Bridgman was interested in the depiction of contemporary local customs, and a letter being hand-delivered by a traveller from afar – in contrast to the electric telegraph – would have been a novel event to observe. 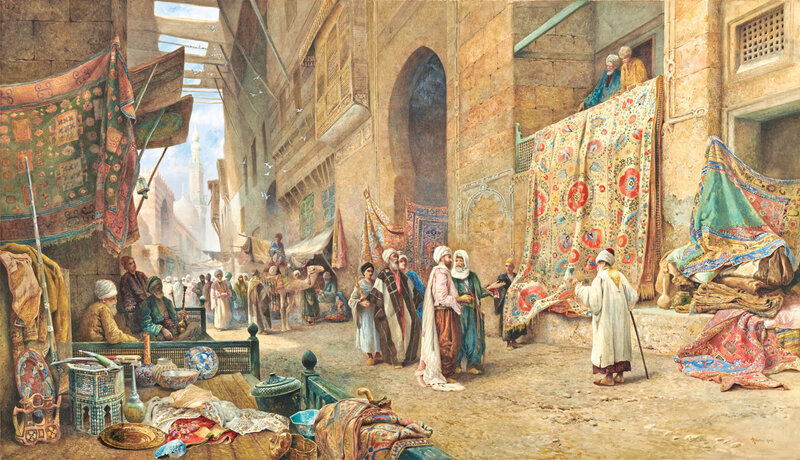 Charles Robertson first travelled to Algeria in 1862 at the age of eighteen and was immediately enraptured by the local culture and customs; he subsequently travelled to Morocco, Egypt, Jerusalem, Damascus and Turkey. Demonstrating the artist’s mastery of watercolour, this exceptionally detailed work captures an animated market, which features an impressive rug draped over a balcony and various merchandise laid out for the day. One of only a handful of works by the artist ever to have appeared on the international market, this superlative work ranks among the finest ever painted by ‘Renaissance man’ Osman Hamdy Bey, one of the most accomplished and revered cultural figures of his day. Hamdy Bey was the first Turkish artist to embrace fully the European style of painting and to use it to depict his own country. More than any other Orientalist painter, he personifies the bridge between cultures. Unlike Western artists who approached their subjects from the outside looking in, Hamdy Bey was in the unique position of painting from the inside looking out.

Figurative painting was virtually unprecedented in Turkey at the time, so Hamdy Bey’s detailed, ‘realistic’ depictions of people pursuing their daily lives represented something completely radical and ground-breaking for his Turkish contemporaries. And Hamdy Bey’s readiness to challenge tradition did not stop there; beyond the figurative nature of the paintings themselves, he was also ready to use his works to challenge the social and religious mores of the time.

In this painting, subtle details such as the seated pupil on the verge of falling asleep challenge the noble occupation of Koranic instruction. This rebellious figure represents none other than the 48-year old artist himself. His inclusion of the word ‘napping’ in the Arabic script – a detail that would not have been lost on contemporary Turkish viewers—reflects Hamdi Bey’s playful spirit and acerbic wit. The Harem in the Kiosk depicts a group of veiled ladies and their daughters guarded by a formidable armed sentry. The artist uses the idyllic yet implausible outing as a device to convey the existence and workings of this social institution. The son of an architect, Rudolf Ernst made several trips to Morocco, Egypt and Turkey and devoted his life to painting Islamic scenes and vignettes of everyday life. On his return to France, he decorated his home in the Ottoman style. In this work, Ernst takes delight in recording the precise patterns of the Iznik tiles in a lavish mosque in Constantinople. Architect and explorer Gustav Bauernfeind first visited the Levant in the early 1880s. He was immediately captivated and in 1898 persuaded his wife and son to leave Germany to settle with him in Jerusalem. Throughout his time there, he travelled extensively across the region, frequently visiting Syria and Lebanon. Despite the suspicion he aroused from locals as well as the risk of plague, Bauernfeind intrepidly painted in cities including Jaffa and Damascus. Rather than glamorize reality, he preferred to concentrate on genuine, unvarnished vignettes of everyday life as he witnessed them. From his first-hand observations of Middle Eastern culture, he created images that are historically and archeologically accurate.

Market in Jaffa is one of the finest works by the artist ever to have appeared on the international market. It is a true tour de force that showcases Bauernfiend’s great skill at rendering the local architecture and the hustle and bustle of a busy street. Eugène Fromentin secured his reputation as one of the leading figures of the Orientalist genre through extended stays in Algeria, publishing two illustrated travel books based on his first-hand experiences. This evocative painting is one of the most iconic images in nineteenth-century Orientalist art.

Unlike the approach of many of his fellow artists, Fromentin sought classical, idealised beauty in unfamiliar territories. Silhouetted against an ominous sky, a group of men brace themselves against the windstorms of the desert. In the extraordinary union between the horse and horseman, Fromentin saw a Greek centaur, the supreme example of the fusion between man and beast. In 1872, Jean-Joseph Benjamin-Constant joined a diplomatic mission from Tangier to Marrakech. Here, the artist immerses the viewer in the scenes of high pageantry and ceremony that he witnessed. The luminous composition is imbued with a cinematic quality, as the Sultan, mounted on a stallion, emerges to flags flying, smoke rising from gunshots and subject bowing on the ground.

Commentaires sur To be unveiled at Sotheby's: One of the greatest collections of Orientalist paintings ever assembled