Since the early 1900’s modern ceramics produced in various Dutch and even German cities were popularly called ‘Delft Blue.’ These objects continued the successful tradition of seventeenth and eighteenth-century products from the city of Delft. Now you may discover the entire color palette of Delftware in an online exhibition presented by Aronson Antiquairs of Amsterdam.

AMSTERDAM.- Since the early 1900’s modern ceramics produced in various Dutch and even German cities were popularly called ‘Delft Blue.’ These objects continued the successful tradition of seventeenth and eighteenth-century products from the city of Delft. While the antiques gained attention from both national and international collectors and researchers, the modern factories grew their assortment and also produced similar objects with other color schemes and named them accordingly, i.e. Delft Red or Delft Green. The blue and white objects were however much more sought after and the name ‘Delft Blue’ stuck. The name soon became interchangeable between the modern and antique ceramics, however we refer to the antique objects as ‘Delftware.’ In turn, the popular term ‘Delft Blue’ means that nowadays many people are surprised that factories in Delft also made multi-colored, or polychrome objects in the seventeenth and eighteenth centuries. The expanded range of colors, mainly after 1700, was rapidly supplemented by a range of forms, decorations and firing techniques. This is how Delft remained the market leader throughout most of the eighteenth century. Now you may discover the entire color palette of Delftware in an online exhibition presented by Aronson Antiquairs of Amsterdam. The origins of Delftware lie in the early sixteenth-century richly colored Majolica wares, the first consumer pottery in the Netherlands.

The origins of Delftware lie in the early sixteenth-century richly colored Majolica wares, the first consumer pottery in the Netherlands. These objects were inspired by Southern European pottery, which is the reason why the use of color and the designs look very Spanish or Italian. The city of Haarlem emerged as the leading majolica centre. Multiple inventories show that forty-five potters had settled there and the production of majolica increased proportionally. Although it is impossible to identify and attribute the work of the forty-five potters in Haarlem, there is one exception: the wares of Willem Jansz. Verstraeten, who is considered the most important potter in Haarlem during the second quarter of the seventeenth century. The arrival of Chinese porcelain, that came to the Republic with the Dutch East India Company (VOC) in the seventeenth century, however reduced the demand for Majolica. The blue and white porcelain wares were highly in vogue and therefore the Dutch potters decided to imitate the much-loved blue and white porcelain wares. In order to do so, they had to overcome both stylistic and technical challenges to imitate porcelain. These developments took place around 1620, with the cities of Haarlem and Delft playing leading roles in this process of innovation. These technical innovations were not all made simultaneously and many objects have qualities of both majolica and faience. In the second half of the seventeenth century the city of Delft took over from Haarlem in creating Delftware in which pottery painters adapted the sceneries on both Chinese Kraak and transitional wares for their own decorations. A unique type of decoration evolved from these different Chinese styles, which shows the Delft interpretation. Chinese figures, landscapes, architecture and attributes are rendered and composed in a way that is not Chinese, but semi-Chinese: Chinoiserie. This style originated in the seventeenth century and quickly became a dominant fashion throughout Europe, enduring through the first half of the eighteenth century. The faience painter choose especially the elements which were in his eyes the most characteristic for the exotic Far East and he combined it as he wished. Delftware is one of the first Dutch examples of Chinoiserie, which through its export contributed to the development of the style in Europe. 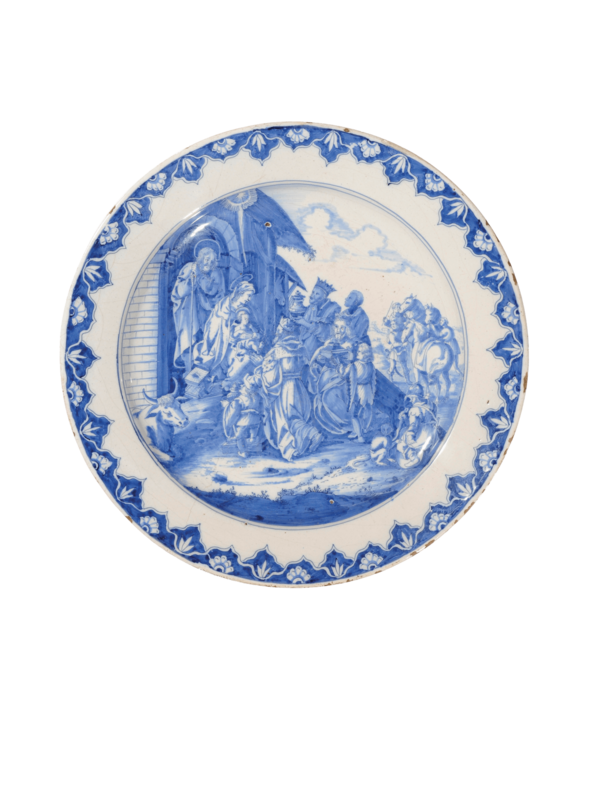 The range of colors seen on eighteenth-century Delftware was achieved through various techniques, using skills honed throughout many years. Not every paint color could be realized in a single firing process, and there were often several rounds in the kiln. Ceramics painted with grand feu colors of blue, green, and yellow were fired at a high temperature of about 1000 degrees Celsius (1800 degrees Fahrenheit). Ceramics were painted with grand feu colors but the Delft potters also developed new colors using the enamel technique. First used in the early eighteenth century, the so-called petit feu firing was one technique that allowed Delft potters to expand their color palette. The technique requires three firings, allowing the potter to use colors that could not withstand high temperatures in the kiln during the second firing (grand feu). The gold and enamel paints were applied after the biscuit firing, the tin glazing and the transparent glaze that added extra gloss (with or without grand feu decorations). With the petit feu colors on top of the glaze, the objects were fired again at a lower temperature (about 600 degrees Celsius / 1100 degrees Fahrenheit) in a smaller kiln known as the moffeloven (muffle kiln). The painted objects were very colorful and delicate, however the additional firing made them expensive to produce and sell. Another technique to apply colors to the white glazed wares was with a so-called cold painted decoration. Unlike the lengthy and expensive process of the grand feu and petit feu colors, the cold painted wares were not fired after they were painted and therefore more economical. It is extremely rare to find objects that are still completely decorated in the cold paint technique. Their rarity can partly be explained because of the popularity of white Delftware at the beginning of the twentieth century, whose scarce fragments of cold painted decorated were removed. 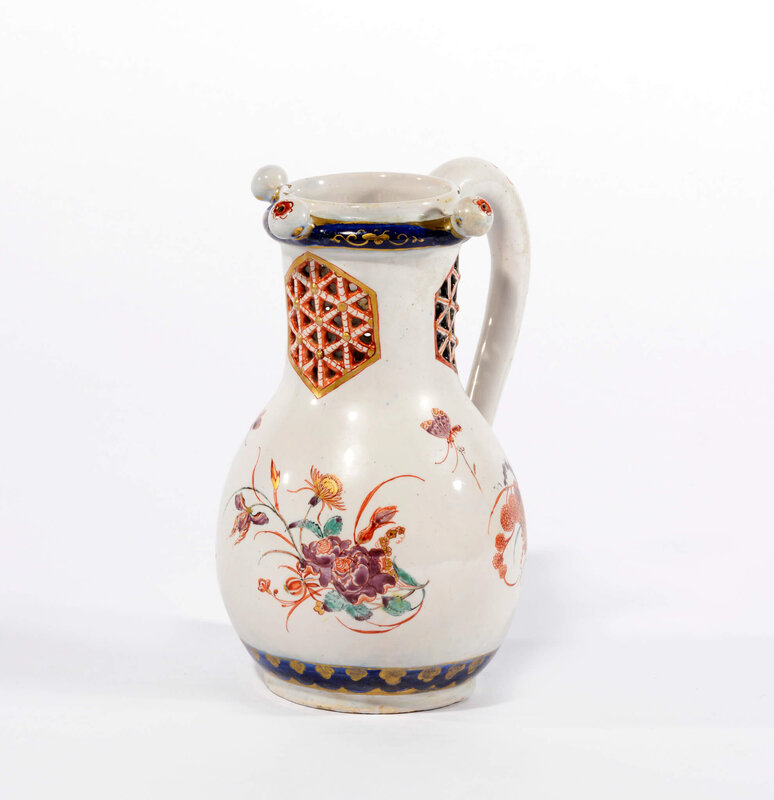 Despite all these techniques to add color to the Delftware objects, white undecorated Delftware was also very fashionable during the seventeenth and eighteenth centuries. Although these objects were less expensive to produce than the blue and polychrome Delftware, the objects were initially only affordable to the upper class. By the end of the seventeenth century, white Delftware was more commonplace and affordable as factories produced greater numbers of white kitchenwares for everyday use. The factories also manufactured decorative white objects of figures and animals that were displayed on a mantelpiece. Further, the Delftware painters also still created blue and white objects as they started in the seventeenth century. However, the style of decoration of the seventeenth-century objects often exudes an Asian atmosphere, but from the mid-eighteenth century onwards the potters turned the focus on a more European formal language. Not only the type of decoration shifted to a more Western pattern, but also the shapes of the objects. Delftware
Delftware has been a national symbol of Holland for almost 400 years. Initiated by the demand for the waning importation of Oriental porcelain from the 1640s, Delftware quickly became an iconic national product and one of the greatest Dutch achievements. From the 1680s the Delftware industry has constantly innovated with new shapes, decorations and functions. Their products were coveted by European nobility and royalty for their quality and diversity. The city of Delft rapidly became an inspiration to many European and even Oriental potters. Since 1881, over five generations of the Aronson family have brought to market the highest quality Delftware. Aronson confidently ensures that private collectors and museum and corporate curators will discover fully researched authentic Delftware. In the first half of the 15th century, mercantile cities such as Brugge (Bruges) and Antwerp in the southern Netherlands (now Belgium) became familiar with earthenware from southern Europe through both trade and political contacts with Italy, Spain and Portugal. This earthenware was exported by Spain and Italy to the northwestern European commercial centers often by sea.

One of the maritime trade routes passed through the Spanish island of Mallorca, from which the name ‘maiolica’ developed for a certain type of glazed pottery. Dutch Maiolica is an earthenware product coated with a tin glaze on the front or exterior and a highly translucent lead glaze on the back or base. Maiolica dishes were fired face down on three spurs that often left marks which remained visible in the central design. In Italy the city of Faenza was a well known center for the production of earthenware that came to be called ‘faience’ by the French. It was slightly more refined than maiolica and distinguished from it in that the earthenware body was completely covered on the front and back with a whiter tin glaze. Also, faïence dishes were fired with the image upward so the spur marks appeared on the back or underside. By the middle of the 15th century, largely through the gradual migration of potters from southern Europe through France to the Netherlands, the earthenware industry had become well established in Antwerp. At this time the Guild of Saint Luke was founded – an artisans’ guild which eventually would extend throughout the Netherlands and would exist for many centuries. The books of the guild reveal that by the end of the 15th century several Italian maiolica- and faience-makers in Antwerp had become extremely successful. 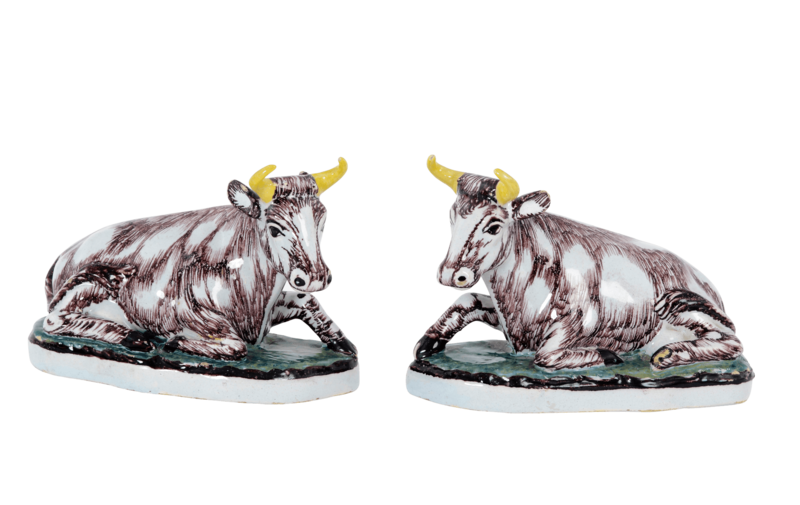 In the second half of the 16th century, under religious pressure, many of the reformists and Protestants were forced to leave Antwerp. Most moved to London, Hamburg or the northern Netherlands and specifically to the city of Haarlem (the city after which New York’s ‘Harlem’ was named) near Amsterdam. One of the families in Haarlem who operated a successful potting business were the Verstraetens, who produced wares in the maiolica (or majolica) tradition. A quarrel in 1642 between Willem Jansz. Verstraeten and his son Gerrit split the market. The elder Verstraeten continued making the old-fashioned majolica and the son ventured into the more modern faience, which was more thinly potted and bore a closer resemblance to the imported Chinese porcelain wares that were becoming so sought-after. The rise of the potting industry in Haarlem occurred simultaneously with the decline of the beer brewing industry in the town of Delft. As the Delft brewers ceased production at the beginning of the 17th century because the town’s canal water had become too polluted to be used to make a potable brew, their large abandoned buildings on the canals were quickly occupied by the pottery-makers, who could utilize both the space and the convenient water source for the working of their clays and for the transportation of their raw materials and finished wares.

At precisely the same time and throughout the 17th century, the Dutch developed a dominance in the European trade with China through which they imported large cargoes of luxury goods, including the much-coveted blue and white porcelain. By the middle of the century, however, a war in China interrupted the production and exportation to the Netherlands of Chinese porcelain, which declined from a quarter million pieces per year to a mere trickle. The potters in Delft seized the opportunity to fill the void, and they began producing earthenwares in emulation of Chinese porcelain, which they successfully marketed as “porcelain.” 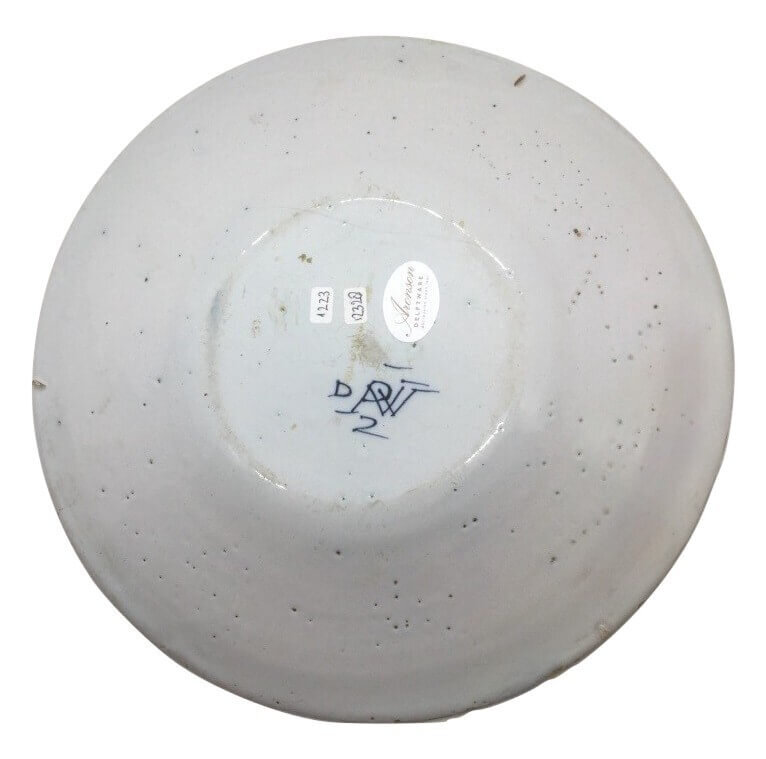 Within the next century and a half, the Delft pottery-makers became so successful, that their products were imitated by many pottery and porcelain factories across Europe and even in the Far East. At the height of production the Guild of Saint Luke counted almost 40 factories in the small city of Delft. Because they were innovative and adaptive to the needs and whims of their varied clientèle, and because of the perseverance of the Delft potters, the elegant term ‘faience’ has become synonymous with ‘delftware’. 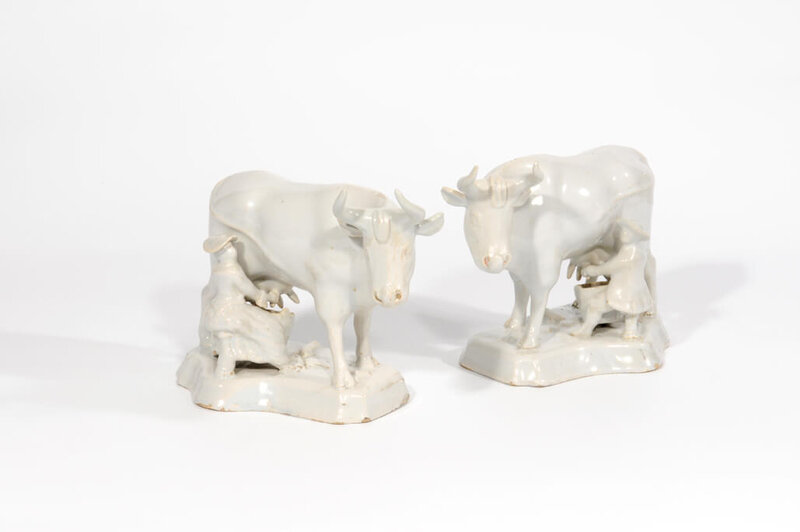 Set of Four Blue and White Armorial Tobacco Jars and Brass Covers, Delft, circa 1820. Each painted with the crowned coat of arms of the city of Rotterdam above a banderole inscribed ‘T WAPE VAN ROTTERDAM. Heights 25.4 to 26 cm. (10 to 10.2 in.). © 2019 Aronson Antiquairs of Amsterdam.