A fine and rare pair of blue and white cupstands, Marks and period of Yongzheng (1723-1735)

A fine and rare pair of blue and white cupstands, Marks and period of Yongzheng (1723-1735) 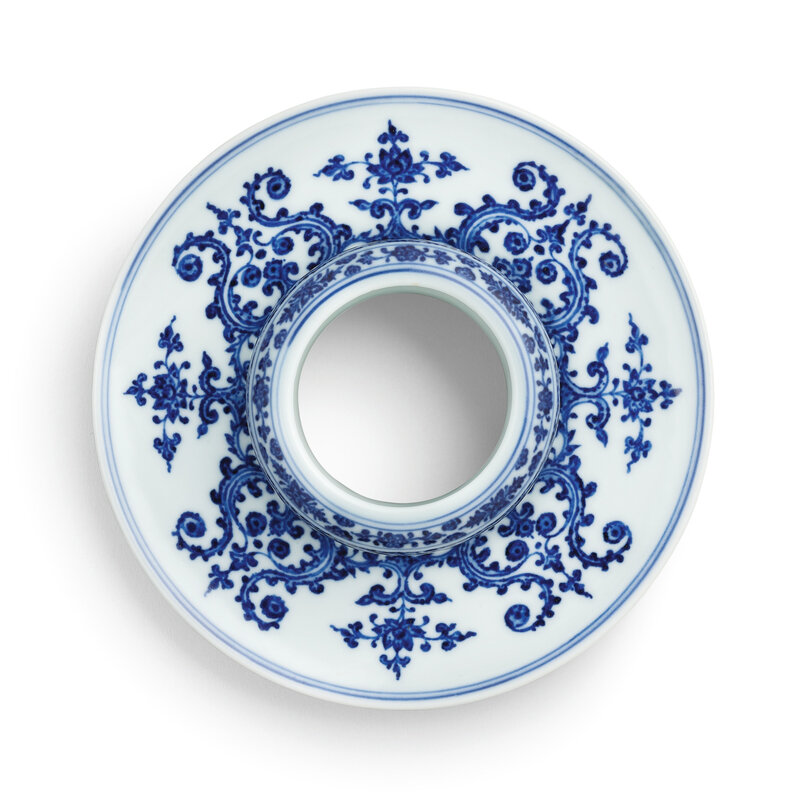 each with a hollow bowl rising to an incurved rim, collared by a broad dish and supported on flared foot, the central dish superbly decorated on the interior with stylised scrollwork accentuated with foliate and floral motifs, the reverse with a pendent strapwork design repeated at the rim below a band of detached sprays, the foot skirted with an upright ruyi lappet border, the inner foot inscribed with a six-character horizontal reign mark.

Note: The present cupstands reflect the eclectic style that developed at the imperial kilns in Jingdezhen, Jiangxi province, in the 18th century. The employment of Jesuit missionaries at the imperial court from the Kangxi period (1662-1722) onwards had a profound effect on the ensuing visual culture of the Qing dynasty. The conspicuous influence of Jesuit missionaries is evident on the curled feathery scroll on this piece, which is strongly indebted to Western Rococo and rocaille that flourished in France in the mid-18th century.

Cupstands painted with this motif are rare, although a closely related pair in the Nanjing Museum, is illustrated in Xu Huping ed., Gongting Zhencang. Zhongguo Qingdai guanyao ciqi / Treasures in the Royalty. The Official Kiln Porcelain of the Chinese Qing Dynasty, Shanghai, 2003, pl. 139; together with a zun-shaped vase featuring a similar motif on the shoulders, pl. 167.

Commentaires sur A fine and rare pair of blue and white cupstands, Marks and period of Yongzheng (1723-1735)