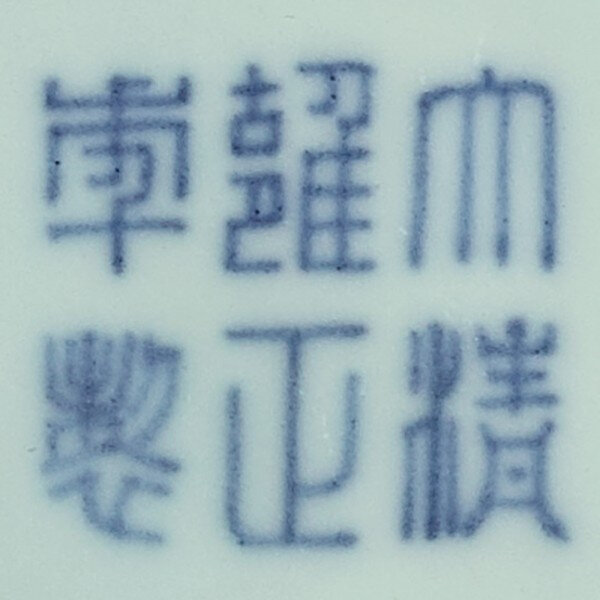 the tapering ovoid body rising to a wide waisted neck, encircled by a row of raised circular bosses just above the curved shoulder, covered overall in a celadon glaze of pale sea-green tone, the base inscribed with a six-character seal mark.

Note: This jar is remarkable for its luminous celadon glaze, the purity and depth of which is accentuated by its thinning and pooling over the raised studs and their recesses. Monochrome glazes were greatly expanded during the Yongzheng reign as a result of the technical and artistic advancements made at the imperial kilns in Jingdezhen. New glaze recipes were developed, and those that had been created in earlier periods were perfected. While a delicate, almost watery celadon glaze had already been created at the imperial kilns in the early 15th century, under Yongzheng several varieties of celadon glazes were experimented with. The Yongzheng Emperor appears to have been particularly fond of this subtle celadon glaze, and according to Palace documents, personally commissioned the imperial kilns to create wares covered in this glaze (Yang Boda, ‘Imperial Porcelain of the Qing Dynasty’, The Tsui Museum of Art, Hong Kong, 1991, p. 46).

Jars of this form are relatively unusual; one in the Nanjing Museum, is illustrated in Xu Huping ed., Treasures in the Royalty. The Official Kiln Porcelain of the Chinese Qing Dynasty, Shanghai, 2003, pl. 190; another in the Baur Foundation, Geneva, is illustrated in John Ayers, Chinese Ceramics in the Baur Collection, vol. II, Geneva, 1999, pl. 282; a third was sold in these rooms, 28th November 1978, lot 180; and a further example was sold at Christie’s Hong Kong, 31st October 2000, lot 877.

See also a flambé-glazed vase, with similar raised studs on the shoulder, but with a taller neck and the reign mark incised on the base, from the Manno Art Museum, Osaka, sold at Christie’s London, 21st June 2001, lot 99.