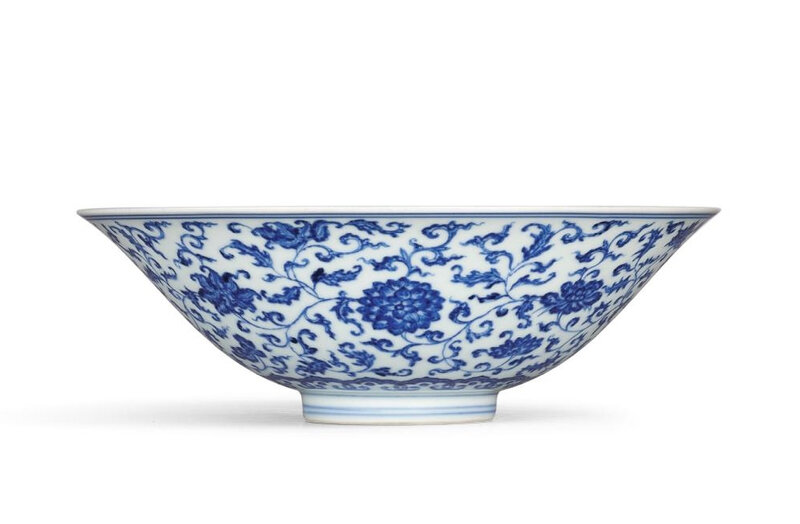 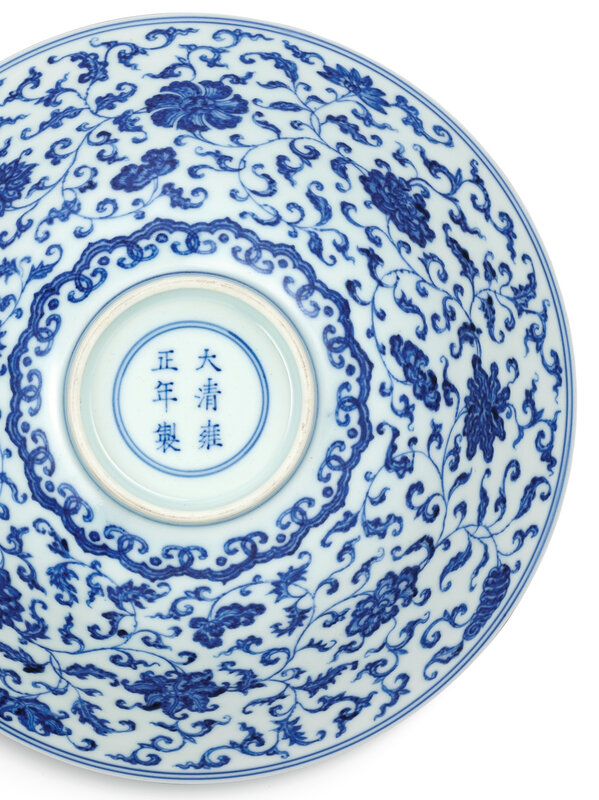 well potted with gently rounded sides everted at the rim, all supported on a short foot, the exterior vibrantly painted with a continuous composite floral meander accentuated with simulated 'heaping and piling', the various flowers rendered borne on a scroll issuing feathery leaves and smaller floral blooms, all above a border of interlocking ruyi heads above the foot, the interior decorated with a central medallion enclosing a lotus bloom wreathed by scrolling foliage, the base inscribed with a six-character reign mark within a double circle.

Note: Expertly decorated with elegant floral blooms and curling leafy scrolls unfolding over the exterior surface, this elegant bowl represents the Yongzheng Emperor’s taste for classic styles of the past and his interest in their reinterpretation resulting in highly innovative contemporary designs of outstanding quality. The Yongzheng Emperor took a keen interest in the work of various imperial manufactories in his empire, particularly the imperial kilns at Jingdezhen where artistic direction was led by his personal taste. Through his brilliant kiln supervisor, Tang Ying (1682-1756), he achieved a distinctive style and refinement by studying celebrated wares of the past and fine-tuning shapes to harmonious proportions, developing sophisticated designs and aspiring to the standard of the best works from Chinese history.

Bowls of this type are rare; a similar but less elaborately painted pair of bowls was sold in our Hong Kong rooms, 31st October 1974, lot 194; and two single bowls, also with similar interlocking ruyi heads above the foot, were offered at Christie’s Hong Kong, 29th September 1992, lot 498, and in our New York rooms, 13th/14th September 2016, lot 271. While the motif has been inspired by early Ming blue and white designs, the Yongzheng craftsman has created a highly contemporary design by infusing the scroll with a featheriness that is characteristic of Western rococo scrolling fronds, which reflects the artistic and cultural exchange of his time.