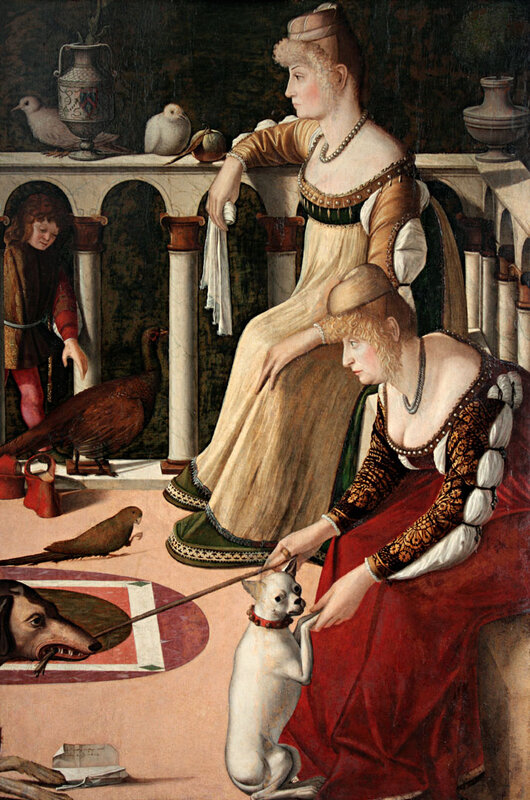 From 9 October 2019, Vittore Carpaccio’s depiction of Two Venetian Ladies will be on display in the Italian Cabinet of the Winter Palace. This is one of most celebrated works of painting in the collection of the Museo Correr (Fondazione Musei Civici Venezia), and among those that have been there since the establishment of that museum. There are no paintings by Vittore Carpaccio in Russian museum collections (the exhibition does include a drawing by him that belongs to the Hermitage), and there are indeed few anywhere outside of Venice, the city where the artist spent almost his entire life.

Carpaccio was born around the year 1465 and died in Venice in 1525/26. The Italian painter managed to leave an extensive creative legacy, and importantly his works are not only signed but also dated. The earliest is from 1490 (The Arrival of Saint Ursula in Cologne, Gallerie dell’Accademia di Venezia); the latest was completed in 1523 (a panel of the organ in the Church of the Ascension in Capodistria, now Koper in Slovenia). He was at the peak of his artistic powers during the Golden Age of Venice, when the aristocratic republic was at the zenith of its power.

For many years, Two Venetian Ladies was the focus of heated arguments. While discussions of the time of its creation have long since abated – today the work is dated to 1496–98, the subject of the picture proved to be a real puzzle. Who are these ladies? Eminent matrons, betrothed noble maidens or courtesans awaiting their patrons? The women differ in age, but their features do display an undoubted family resemblance. The theory was that they could be mother and daughter, or else sisters. And what is the significance of the objects and living creatures that surround them? Why do we see only the stem of a plant in the vase standing on the parapet to the left and not flowers – does that mean that the picture has been cut down?

The answers to these and many other questions were sought by more than one generation of experts in iconology, art historians and restorers. Numerous attempts to connect all the elements of the picture together with neat logic did not meet with success and, as a consequence, some critics asserted that it had no subject as such. A coherent interpretation of all the symbols depicted was rendered more difficult by the fact that the panel had indeed been cut down and it is no longer possible to see what was painted on the left and at the top.

The story of Carpaccio’s work took an unexpected turn in 1944, when the young architect Andrea Busiri Vici, later a prominent art historian, acquired from an antique dealer in Rome a little panel that had paintings on both sides: on the front there was a depiction of archers standing in boats propelled by oarsmen and shooting at waterfowl, while on the back there was a trompe-l’oeil depiction of letters strung on a length of narrow ribbon.

Having purchased the panel for a very modest sum, Busiri Vici was unable to keep possession of it. The previous owner managed to recover it through the courts on the grounds that the price paid did not accord with the true value of the work. After that, the mysterious panel disappeared from sight until 1972, when it was acquired by the J. Paul Getty Museum in California.

Meanwhile, as early as 1962, the hypothesis was put forward simultaneously in Italy and the USA that Hunting on the Lagoon was actually the missing upper piece of the panel depicting the two Venetian ladies and that they had once belonged to a single whole. In support of their case, the authors pointed to the lily flower in the lower right-hand part of the hunting scene that had no connection with that subject but did continue the line of the stem standing in the vase bearing a coat-of-arms on the panel in the Museo Correr. Later x-ray and infrared examination and a dendrological analysis of the works in the Getty Museum and the Museo Correr confirmed this theory, indicating that the two pieces of panel were identical, while a study of the primers and pigments produced an absolute match of artistic technique. 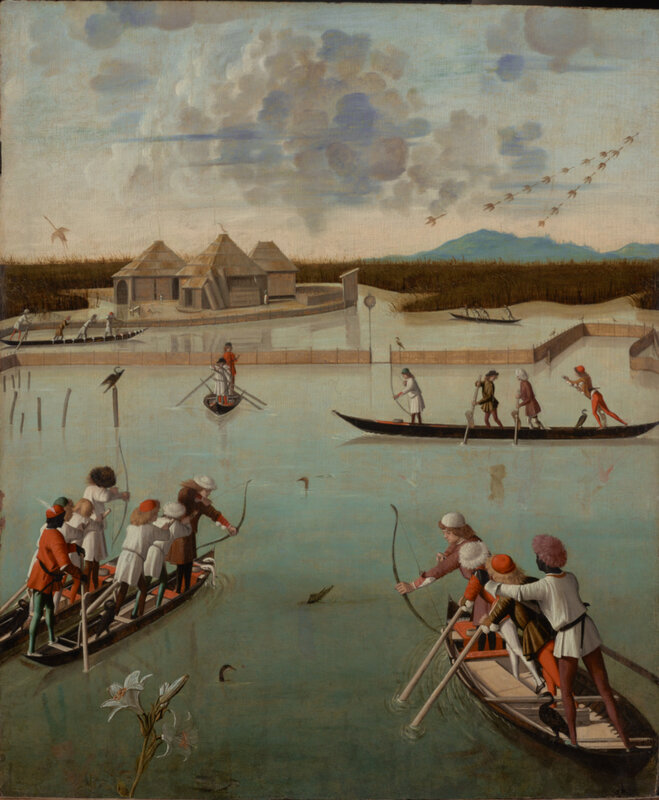 The results of these investigations enabled Augusto Gentili and Flavia Polignano to propose a logically elegant interpretation of the subject as an allegory of a virtuous Christian marriage. Carpaccio depicted the noble ladies waiting for the return of their husbands (or husbands-to-be) from the hunt. However, from the balcony on which they are languishing from boredom, there is no actual view of the marshy shores of the lagoon: that is a stylized, imaginary space, a visualization of the two young women’s thoughts. All the objects and creatures around them symbolize irreproachable fidelity and purity of intentions: the two doves are the embodiment of an inseparable pair of lovers, the orange is one of the attributes of the Virgin Mary, as is the lily flower – a symbol of chastity and saintliness.

In the course of the Masterpieces from World Museums at the Hermitage series, the Russian public have previously been introduced to some unique works of art from leading European institutions. In 2019, the cycle began with the display of Paolo Uccello’s masterpiece Saint George and the Dragon  from the Musée Jacquemart-André in Paris.

The curator of the exhibition is Irina Sergeyevna Artemyeva, Candidate of Art Studies, leading researcher in the State Hermitage’s Department of Western European Fine Art.