LONDON.- An important Old Master portrait from the collection of the late Queen of Jordan, Sharifa Dina Bint Abdul-Hamid, is among the leading works to be offered at Bonhams Islamic and Indian Art sale in London on Tuesday 22 October. The Portrait of Nur Al-Din Hussain Khan by the British artist James Wales, is estimated at £50,000-70,000.

Nur Al-Din Hussain Khan was the vakil or agent to Sir Charles Malet, the East India Company’s Resident at the Court of the Maratha Empire in Poona in the last quarter of the 18th century.

The painting was executed in 1792 by James Wales, who had arrived in India the previous year. Initially he worked in Bombay, but moved to Poona after an introduction to Sir Charles Malet. (Following his return to England in 1798, Sir Charles married Wales’s daughter Susanna). Wales painted portraits of many members of the European community in Poona, as well as leading figures in the Maratha Court, including that of Nur Al-Din Hussain Khan.

Bonhams Head of Islamic and Indian Art, Oliver White, said: “This serene work is in excellent condition. It is also a fascinating insight into one of the rarely documented Indian courts and exemplifies the work of British artists in India in the late 18th century. It also serves to illustrate the close relationship between the Maratha Court and the British during this period.” 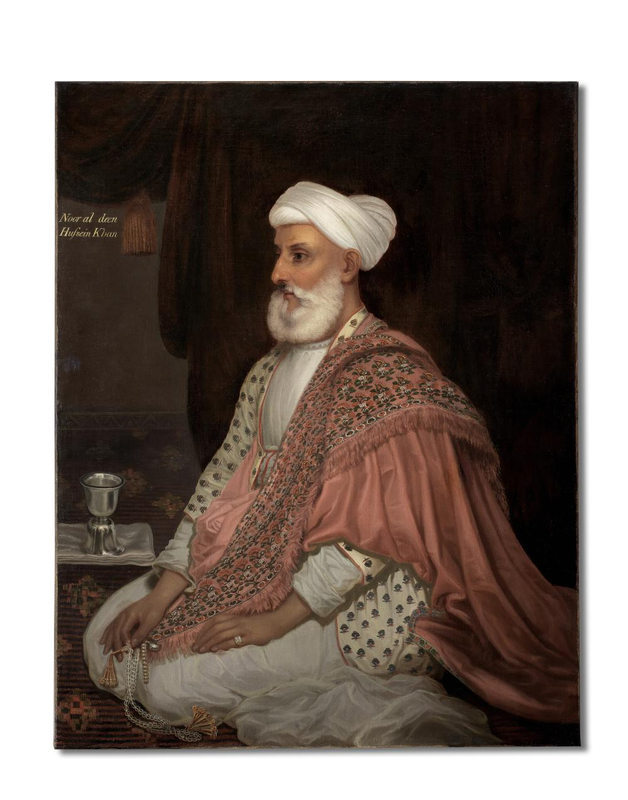 Note: James Wales, a Scot, arrived in India in 1791, having been granted permission to go there through his connections in the East India Company. At first he worked in Bombay, producing both miniature and full-scale portraits, as well as landscape drawings. He was also introduced to Sir Charles Warre Malet, Company Resident at the Maratha court in Poona from 1786 to 1797. Wales stayed in Poona until December 1792, living in some style. From the start he began painting portraits of members of the European community, and Indians, including the present lot. Through Malet he also met the Peshwa, Madhu Rao Narayan, as well as the most powerful chief, Mahadaji Sindhia. In order to please the British, it seems, the Maratha rulers sought to commission paintings in a European style. Wales continued to work between Poona and Bombay, also drawing the rock sculptures at Elephanta. He met Thomas and William Daniell in 1793 when the brothers were on their way to the Middle East. He died of a fever in Bombay. For an account of his career and a selection of his works, see Archer, op. cit., pp. 333-349. Other Poona portraits by Wales are in the collections of the British Library and the Royal Asiatic Society.

The sitter, Nur al-Din Hussein Khan, appears to be little known, not being listed in standard biographical works. He was vakil at the Company Residency, i.e. agent or representative, and assistant to Malet, the Resident, acting as liaison between the Company and the Marathas. He features, looking much as he does in Wales' painting, in Thomas Daniell's depiction (circa 1800-05, based on drawings by Wales) of the durbar concluding the treaty with Poona in 1790, seated between Malet and the British First Secretary (see C. A. Bayly (ed.), The Raj: India and the British 1600-1947, London 1990, pp. 162-163, no. 173; and for an aquatint of the painting, see Archer, op. cit., p. 354, no. 261).

The sale also features a fine 17th Ottoman velvet and metal-thread panel from the collection of Sharifa Dina Bint Abdul-Hamid. It is estimated at £15,000-20,000. of rectangular form, the red silk pile voided with a repeat design of ogival medallions containing serrated palmettes overlaid with sprays of tulips, carnations and hyacinths, surrounded by flowerheads, the trellis overlaid with alternating knot and flowerhead motifs, framed.

Note: The serrated palmette was a popular motif on Ottoman velvets. It was either free-floating, or part of a trellis such as on this panel. For a similar velvet panel, see Nurhan Atasoy, et al, Ipek. The Crescent and the Rose: Imperial Ottoman silks and Velvets, London, 2001, fig. 336.

A Hashemite Princess, Sharifa Dina Bint Abdul-Hamid was married to her distant cousin King Hussain of Jordan, whom she had first met in London when he was a pupil at Harrow School and she was studying English at Girton College Cambridge. The marriage lasted from 1955 until their divorce in 1957. In later life, Princess Dina taught English at Cairo University.