of shallow rounded form on a short foot with everted rim, decorated underglaze in yellow, green and manganese on a cream ground with five birds interspersed by abstract vegetal motifs, the exterior with a large zig-zag motif filled with lattice design, hatching and stylised palmettes. 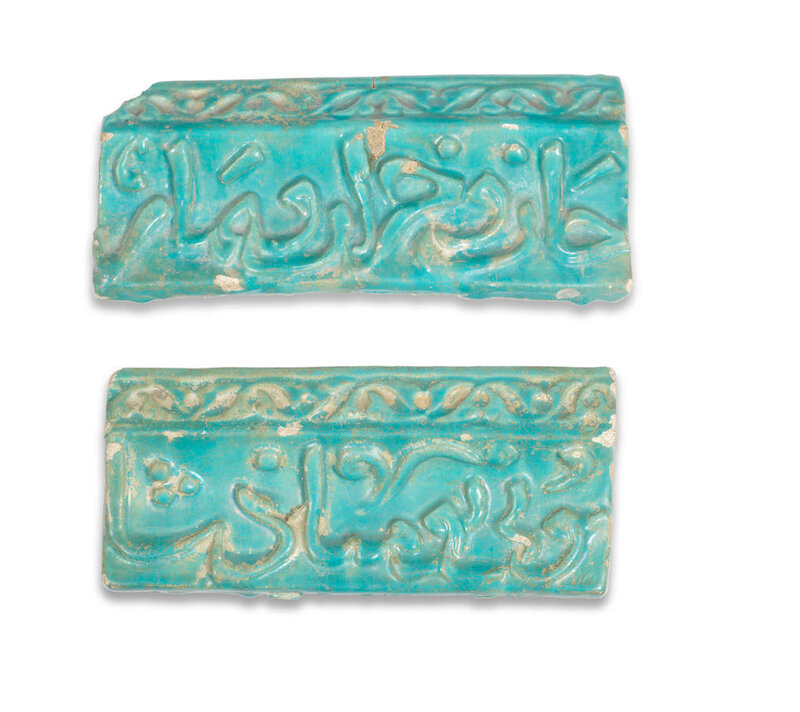 of moulded concave form with flattened upper borders, each decorated in relief with inscriptions in naskhi surmounted by bands of undulating vines.

For a similar tile almost certainly from the same frieze see Sotheby's, Arts of the Islamic World, 8 October 2008, lot 147. of rectangular form, decorated in red, black and gold leaf on a turquoise ground, with moulded inscription on a ground of scrolling vegetal interlace, the top edge with a band containing a line of cable motif, old collection labels to reverse in French, one relating to the inscriptions and dated 1958. of conical form on a long foot, decorated underglaze in cobalt-blue and black on a white ground with four radiating inscription-filled bands interspersed by panels containing palmettes, the rim with a further band of inscription, the exterior with panels containing foliate sprays. of conical form on a short foot, decorated in black under a turquoise and cobalt-blue glaze with a series of concentric zig-zag motifs, the exterior with a scrolling vine, the well with overpainted face motif. of deep slightly rounded form on a short foot, the white slip ground incised with two addorsed sphinxes with entwined tails, roundels containing flowerheads to their flanks, possible inscriptions to the wings, interspersed by scrolling tendrils and split-palmettes, a panel of pseudo kufic below, all under an ochre glaze .

Note: The bowl is a fine example of Garrus pottery and is comparable to one formerly in the Oscar Raphael Collection and now in the Fitzwilliam Museum, Cambridge (illustrated in Arthur Upham Pope, A Survey of Persian Art Oxford, 1939, pl. 617 B). The marks on the wings appear to be inscriptions, that on the left apparently reading 'Suleyman', and are reminiscent of hidden signatures on contemporary bowls from Aghkand. of deep rounded form with inverted rim on a short splayed foot, decorated in a brownish gold lustre with a central roundel containing a seated figure, surrounded by a series of panels containing sphynxes within lobed cartouches, the rim with paired foliate motifs, the exterior with panels containing scrolling tendrils. of bulbous form with wide cylindrical neck, on a splayed foot with simple handle, decorated in a brownish gold lustre with a series of cartouches containing mounted figures to the shoulder, the lower body with a series of cartouches containing palmette motifs, the neck with quadrupeds and abstract vegetal motifs, the interior with a band of inscription. of convex form with two rows of moulded palmettes surmounted by a cylindrical section, decorated in cobalt-blue, turquoise, red, green and manganese on a white ground with four palmette cartouches containing flowerheads, above a band of undulating tendrils with pendant palmettes, mounted.

Provenance: H.E. the Baron Paternotte de La Vaillée, Belgian ambassador to Jordan and Lebanon from 1967–1970, and thence by descent. of square form, decorated in cobalt-blue, turquoise, yellow and manganese on a white ground with geometric interlace filled with flowerheads, palmettes and other stylised vegetal motifs. each of rectangular and concave form with pointed arched top, decorated in turquoise and white glaze, deeply carved with a lattice design of vegetal interlace.

Provenance: The tiles in the present lot are related to those which line the walls of the funerary chamber in 'The Mausoleum of an Anonymous Woman' in Samarkand dating to 1360 (see Jean Soustiel and Yves Porter, Tombs of Paradise, Saint-Remy-en-L'Eau 2003, p. 87). Note: The present lot is related to the tiles which line the walls of the funerary chamber in 'The Mausoleum of an Anomymous Woman' in Samarkand dating to 1360 (see Jean Soustiel and Yves Porter, Tombs of Paradise, Saint-Remy-en-L'Eau 2003, p. 87). of deep rounded form on a splayed foot with everted rim, decorated in cobalt-blue and black on a white ground under a clear glaze with a six-pointed star to the well filled and surrounded by abstract motifs, the walls with a series of panels containing stylised vegetal motifs and lattices filled with circle motifs, the exterior with a band of scrolling tendrils, label of Bluett & Sons, London to base. of compressed globular form with truncated conical neck and domed spout with circular aperture, decorated in cobalt-blue and brown with black outline on a white ground with two birds in a rocky landscape with floral sprays, the neck with panels containing flower motifs.