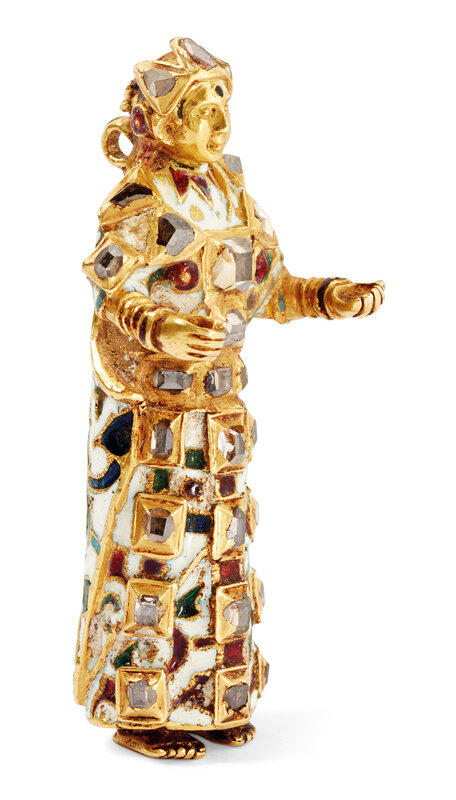 Decorated with enamel and set with diamonds in gold on all sides, the figure has a suspension loop on the back above her braided hair.

Note: This kundan-set gold figure of a female saint displays the European influence in India which gained popularity under Emperor Akbar. His considerable interest in Christian iconography led to imperial patronage of artworks where Indian techniques were paired with Western styles and forms. Artists such as Basawan and Kesu Das drew inspiration from Flemish and German engravings, producing spectacular copies and interpretations of Christian saints (Okada, 1992, p.86-89 and p.99). However, there are very few known figures produced in precious metals and stones from Goa, making this an incredibly rare example of an opulent, three-dimensional work displaying such imagery. While the gem-settings, garment and hairstyle reveal an Indian origin of manufacture, the open-armed posture of the saint is derived from Christian devotional sculpture.

The table-cut stones adorning this figure are notable for how they barely change the form of the natural diamond crystals. Texts as early as the sixth century such as the Ratnapariksa expressly state that the best form of diamond was in its natural octahedral crystal form (Keene, 1981, p.24). The table-cut used here first developed in India in the fourteenth century. This type of cutting supported the general reluctance to grind the stone away unnecessarily while creating more light reflection and refraction to amplify the brilliance of the stone (Stewart, 2018). Given the use of this type of cutting, it is likely that the diamonds here are examples of very early Mughal cut diamonds. For a ring of similarly cut diamonds, see Christie's, New York, 19 June 2019, lot 291.