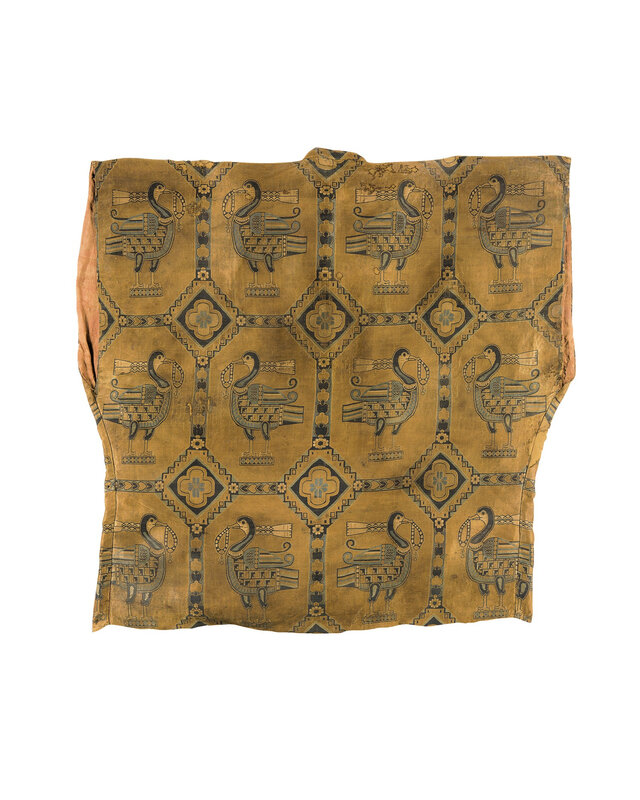 sleeveless with open front, short collar, woven with dark and light shades of blue on a honey-gold silk samite in weft-faced compound twill, decorated with facing ducks wearing a flowing scarf and holding a pearl necklace, each within a rectangular frame with heart-shaped designs within borders, foliate details between.

Note: In superb condition, this magnificent shirt, characterised by its rich honey-gold ground offset with designs in shades of blue, would have been considered a true ‘cloth of gold’ which was so prized by the Sogdian elite and its neighbours.

The Sogdian Empire, located in modern-day Uzbekistan and Tajikistan was an ancient Iranian civilisation, and the heart of an extensive trade network. The Sogdians, described as ‘the great traders of Inner Asia’ by contemporary Sogdian, Chinese, Arabic, Byzantine, and Armenian sources, used to sell products such as musk, slaves, silverware, silk and many other goods, to its surrounding population (Étienne de la Vaissière, Sogdians in China: A Short History and Some New Discoveries, Silk Road Foundation Newsletter vol. 1, no.2, Paris, December 2003).

Trading extensively along the Silk Road, the Sogdians particularly established a strong network with China. Sogdian Silks have been found in sites all the way up to in northwest China, such as Dulan and Astana. Due to the advantageous location of the Sogdian Empire, at the centre of the crossroads, they traded the best silks from China with the Eastern Persian market, leading to a strong influence of Sassanian motifs in Sogdian design.

The condition of this shirt is impressive – very few examples in this state of preservation exist. Some of the best known models are currently in the Abegg-Stiftung Foundation in Switzerland and the Cleveland Museum of Art in Ohio. In the latter, a child’s coat is woven with a design that is comparable to the present shirt: “[…] strongly influenced by the art of Sasanian Iran (circa 224-640 AD), especially the ribbons (patif) worn by the ducks, the necklaces held in their beaks and the pearl roundels” (J. Watt and A. Wardwell, When Silk was Gold: Central Asian and Chinese Textiles, The Metropolitan Museum of Art, New York, 1997, p.21). Although the characteristic pearl roundels do not feature on this shirt, the heart-motif design in the borders around the birds is reminiscent of this detail. The ‘duck in a roundel’ motif also appears on a hanging in the Abegg-Stiftung Foundation, Switzerland (inv. no.5682), and further variations of this design can be seen on examples sold in these rooms (5 October 2011, lot 181).

What makes silk so unique as a luxury commodity is not only the intrinsic value of the material itself, but also the fact that it is easily portable. Indeed, even a thousand years later, the condition of this shirt is remarkable, as it was produced with the highest quality silk. This fashion for luxury silks set by the Sogdians continued throughout the thirteenth and fourteenth centuries. An Ilkhanid robe offered at Sotheby’s, 9 April 2014, lot 124, was also decorated with a variation of the facing pheasant motif.

An indicator of wealth and rank, this shirt would have served an important function in the context of trade and diplomacy. Today, it provides a rare glimpse into an important civilization that left an imprint on empires spreading over multiple continents and for many subsequent centuries.

For further information on the Sogdian civilisation as well as selection of artworks, please refer to the online exhibition: The Sogdians: Influencers on the Silk Roads, by the Freer Gallery of Art and Arthur M. Sackler Gallery, Smithsonian Institution: https://sogdians.si.edu/.