At the Met, The Last Knight: The Art, Armor, and Ambition of Maximilian I

At the Met, The Last Knight: The Art, Armor, and Ambition of Maximilian I NEW YORK, NY - The first major exhibition to focus on the critical role that armor played in the life and ambitions of Holy Roman Emperor Maximilian I (1459–1519) will open at The Metropolitan Museum of Art on October 7, 2019. Coinciding with the 500th anniversary of Maximilian’s death, The Last Knight: The Art, Armor, and Ambition of Maximilian I will bring together more than 180 objects selected from some 30 public and private collections in Europe, the Middle East, and the United States. It will be the most comprehensive loan exhibition of European arms and armor in decades.

"The Last Knight will show how Maximilian, an ambitious European ruler at a turning point in the history of the world, used armor to serve his personal and dynastic aspirations and influence the politics of the time,” said Max Hollein, Director of The Met. “This exhibition will also reveal how the emperor used all of the forces at hand—power, prestige, and, most importantly, art and armor—to forge a heroic image and everlasting legacy.” The exhibition will examine the importance of European armor at the dawn of the Renaissance through the lens of this legendary ruler’s life, and it will explore how Maximilian’s unparalleled passion for the trappings and ideals of knighthood served his boundless worldly aspirations, imaginative stratagems, and resolute efforts to forge a lasting personal and family legacy. Sumptuous armors that highlight Maximilian’s patronage of the greatest European armorers of his age will be shown together with works of art that emphasize the emperor’s dynastic plans and the centrality of chivalry at the imperial court and beyond.

The outstanding armors featured in the exhibition will be complemented by drawings, prints, paintings, sculptures, stained glass, tapestry, toys, and weapons. Also included is the complete series of 18 sandstone reliefs commissioned by Maximilian to decorate the façade of the celebrated Goldenes Dachl, the loggia of his official residence in Innsbruck, known for its distinctive golden-tiled roof. Recently conserved, these iconic works are among Austria’s greatest artistic treasures. They have never left the City of Innsbruck, which is generously lending them to The Met. 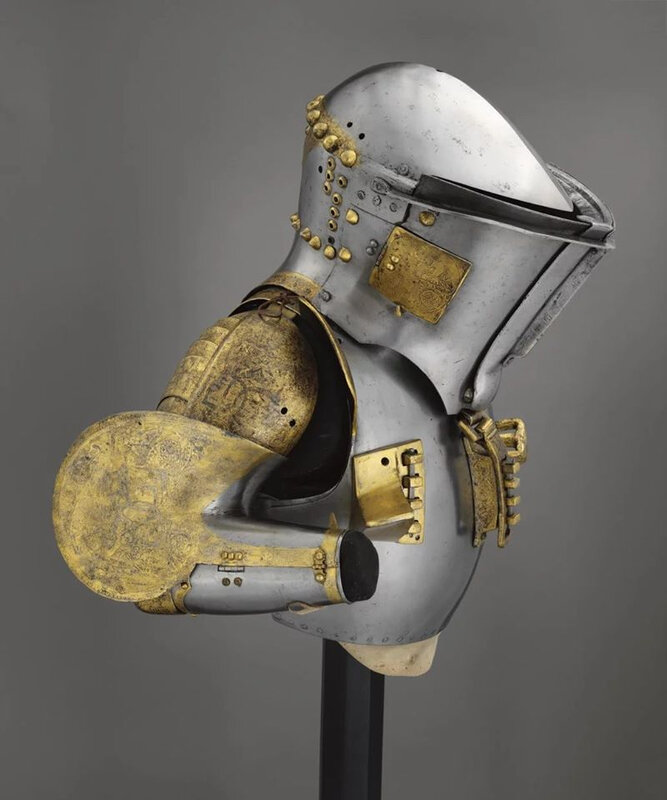 Extraordinary international loans include the largest group of armors created for Maximilian and his descendants, relatives, and allies, from the Kunsthistorisches Museum in Vienna; works from additional collections in Austria, with generous loans from the Albertina in Vienna and the Tiroler Landesmuseum Ferdinandeum in Innsbruck; and works from Belgium, France, Italy, Spain, the United Arab Emirates, and the United Kingdom.

The Last Knight: The Art, Armor, and Ambition of Maximilian I will be on view exclusively at The Met and will be accompanied by an illustrated catalogue with contributions from leading scholars in the United States and Europe.

The exhibition is organized by Pierre Terjanian, Arthur Ochs Sulzberger Curator in Charge of the Department of Arms and Armor at The Met.

The exhibition is made possible by Jo Carole and Ronald S. Lauder.

The exhibition is supported by an Indemnity from the Federal Council on the Arts and the Humanities.

The catalogue is made possible by the Grancsay Fund, The Carl Otto von Kienbusch Memorial Fund, and The Andrew W. Mellon Foundation. Commentaires sur At the Met, The Last Knight: The Art, Armor, and Ambition of Maximilian I