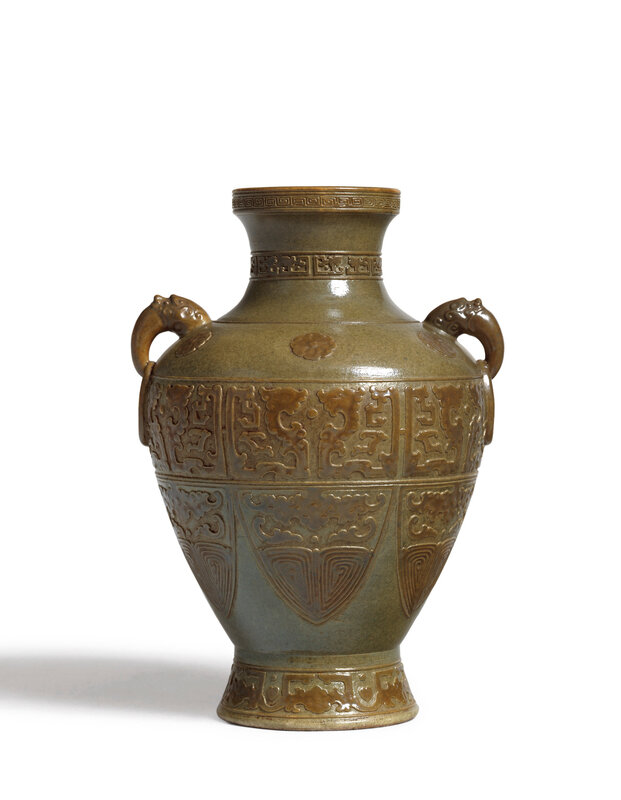 modelled after the archaic bronze lei form, the baluster body flanked by a pair of animal-mask handles suspending faux ring handles, all between a tall splayed foot and a waisted neck moulded in low relief with a band of stylised confronting dragons beneath a short straight mouthrim decorated with a key-fret border, the shoulder with six evenly spaced florets, the centre further moulded with a wide band of confronting pairs of archaistic dragons above another band of bat and scroll motifs within pendant blades, the foot moulded with an archaistic scroll, the moulded design covered with a lustrous olive-brown glaze reserved against a slightly mottled green, thinly glazed ground, the base incised with a six-character seal mark.

Note: Imitations of other materials were a challenge taken up by the Jingdezhen potters in the Yongzheng reign to display the great potential of their craft and appear to have pleased the Qianlong emperor in particular. Bronzes, generally archaistic rather than archaic, became particularly popular as models and were copied in a great variety of ways, with different glazes, flambé effects to imitate patina, and with gilding and silvering to imitate inlay. The present vase, with its low-relief carving and subtle contrast between glossy and matte areas, is most unusual in its subdued beauty and no other piece of similar style appears to be recorded.

This vase is in the style of late Ming and early Qing bronzes and may be an exact copy of a specific model, which in turn would have been inspired by an archaic bronze lei of the Western Zhou period (c. 1046 – 771 BC), such as, for example a vessel in the Avery Brundage collection in the Asian Art Museum of San Francisco, illustrated in René-Yvon Lefebvre d'Argencé, Bronze Vessels of Ancient China in the Avery Brundage Collection, San Francisco, 1977, pl. XXXVIII.