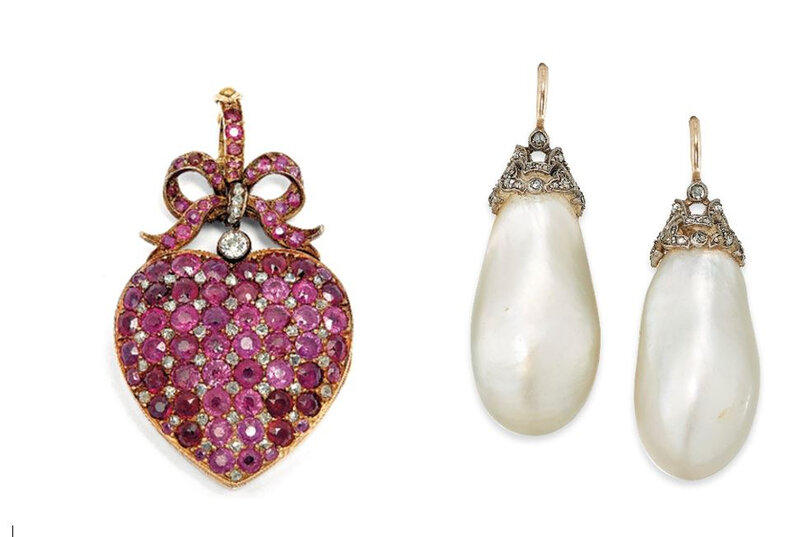 London – Christie’s Important Jewels auction on 27 November in London will present historic jewels formerly in the collection of Eugénie, The Last Empress Of France. Offered at auction will be an important pair of 19th century natural pearl earrings (estimate: £60,000-80,000), alongside a mid-19th century ruby and diamond heart locket pendant, circa 1850-60, (estimate: £10,000-15,000). The locket was included in the 2008 exhibition,  Le Musée Chaumet, Le Grand Frisson - Bijoux de Sentiment, de la Renaissance à nos jours, in Paris. Adorned with circular-cut rubies and old and rose-cut diamonds, a glazed compartment on the reverse of the pendant contains a lock of hair reputedly belonging to Napoleon Ill. Married to Napoleon III, Eugénie de Montijo (1826-1920) was a woman of great elegance, beauty and charm. Born in Granada, Spain, she was educated at the fashionable convent of the Sacré-Coeur in Paris, and contributed immensely to the grandeur of the French court. From the beginning of her reign in 1853, Empress Eugénie did much to enhance the reputation of French haute joaillerie, which at that time inspired the whole of Europe. Her love of jewellery being legendary, she had many Crown jewels remounted to suit her personal taste and also commissioned new pieces from the most famous jewellers in Paris including Bapst and Chaumet.