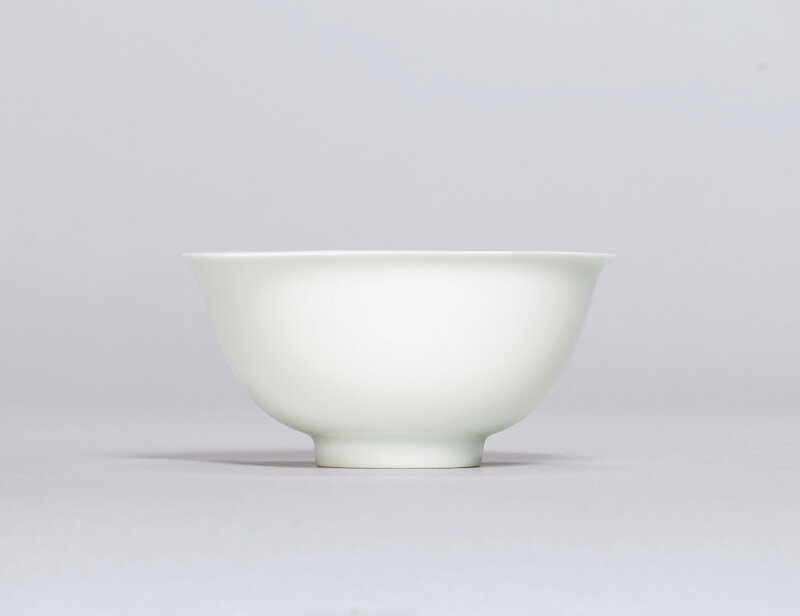 The egg-shell thin bowl is decorated in slip on the interior with two scaly dragons amidst clouds. The centre of the interior is inscribed in slip with a Kangxi reign mark in seal script, box.

Note: This delicately potted bowl, with eggshell-thin walls and a lustrous, satiny glaze, is modelled after the highly coveted tianbai (sweet white) porcelains from the Yongle period. Kangxi white-glazed bowls with anhua ‘hidden’ decorations usually come in two forms: the first type with motifs decorated in slip, such as the current example; the second type with motifs incised onto the biscuit body. Slip-decorated examples appear to be much rarer, with very few pieces known, including a white-glazed wide bowl decorated with cloud motifs in slip, inscribed on the base with an underglaze-blue Kangxi mark, from the Nanjing Museum, illustrated in The Official Kiln Porcelain of the Chinese Qing Dynasty, Shanghai, 2003, p. 106; and another one sold at Christie’s Hong Kong, 2 December 2015, lot 3194.

There are also examples of Kangxi white-glazed bowls with anhua dragons, but of incised decorations, such as a bowl incised with two dragons pursuing flaming pearls and with an underglaze-blue reign mark from the Baur Collection, illustrated by J. Ayers in the Baur Collection, vol. III, Geneva, 1972, no. A408; and one in the McElney Collection was included in the exhibition, Porcelain of the High Qing, Art Gallery of Greater Victoria, 1983, no. 32.

It is notable that all the aforementioned examples, both incised and slip-decorated, have underglaze-blue Kangxi reign marks written in standard script, unlike the slip-decorated mark in seal script as seen on the current bowl, making it highly unusual and exceedingly rare.