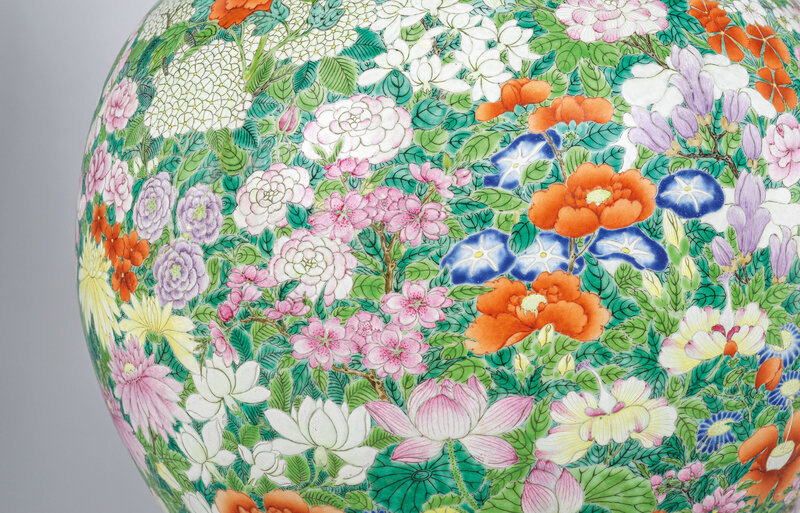 The vase is potted with a lower body of slightly compressed spherical shape on a slightly spreading foot, the upper body of pear shape with waisted neck and flaring rim, brightly and naturalistically enamelled with a great bouquet of mixed flowers reserved on a leafy ground, the foot with a pale blue foliate band on a pink ground, and the rim with a band of pink ruyi lappets. The interior and base are applied with turquoise enamels.

Note: The present lot was sold together with another Qianlong mille fleurs double-gourd vase bearing a sticker indicating it was from the Fonthill Heirlooms, inscribed no. 586/2, at Sotheby's London, 23 July 1968, together as lot 128. The companion piece, while not identical to form a pair, is also of double gourd form and decorated with the mille fleurs pattern, later sold at Christie’s London, 11 November 2003, lot 94. 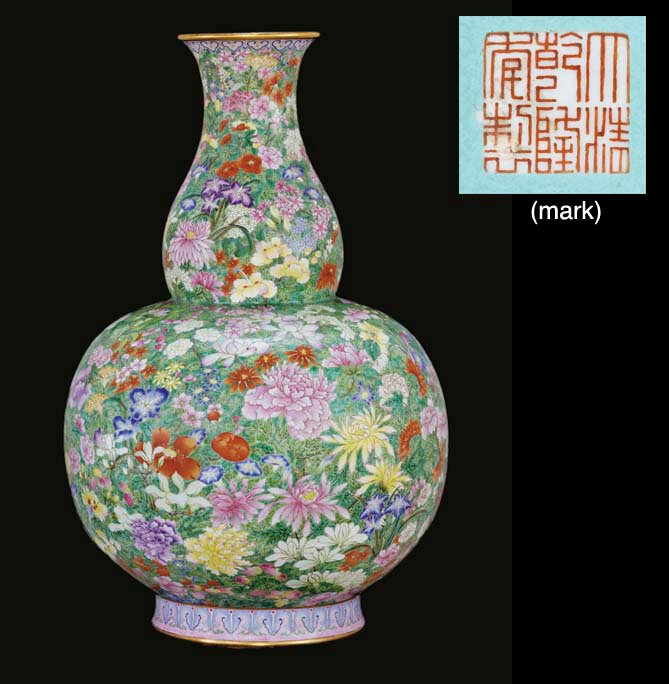 Magnificent vases of this type decorated in the skillfully painted mille fleurs or wanhuajin (myriad flower brocade) design are very rare. A comparable vase is in the collection of the Walters Gallery of Art, Baltimore, illustrated by Steven W. Bushell, Oriental Ceramic Art, Frederick Muller, London, 1981 edition, p. 214, figure 279. The Walters vase has the upper part of its neck missing and been bound with metal.

Certainly it would have been extremely time-consuming and require exceptional skill to create such a complex pattern on a large vessel. Even with the resources available to the Qianlong emperor, it is not surprising that very few mille fleurs pieces of size were made. A large gu shaped vase in the Liaoning Provincial Museum (illustrated by Liu Liang-yu in A Survey of Chinese Ceramics - 5 - Ch'ing Official and Popular Wares, Aries Gemini Publishing Ltd., Taipei, 1991, p. 190) indicates that an altar set must have been made with this decoration. The Liaoning vase, like the current vases, bears a six-character seal mark in iron red against a turquoise ground, but in the case of the Liaoning vase this is written horizontally above the central bulb. A further large vase, this time of simple guan form, decorated with mille fleurs from the Grandidier Collection is in the Musée Guimet, Paris (illustrated by Michel Beurdeley and Guy Raindre in Qing Porcelain - Famille Verte, Famille Rose, Thames and Hudson, London, 1987, p. 118-9, nos. 164-5). Like the current vases, the Guimet vase has a six-character iron red Qianlong seal mark on white against a turquoise ground.