Superbly carved in high relief on one side with the luohan Kalika in crisply carved loose flowing robes, seated in a grotto beneath a gnarled pine tree next to an inscription, holding a bell in each hand, his right knee raised before a rocky outcrop with an incense burner, vase with incense tools and books, the reverse with the luohan Angaja holding a fly-whisk within a craggy grotto with further pine trees and another inscription, all below ruyi-shaped clouds, the stone of very pale green tone with minor russet and cloudy inclusions, stand.

Note: Dr Ramler and his mother left Vienna to go to Shanghai in 1938 due to the rise of the Nazis in Germany. From Shanghai they travelled to Hong Kong. However, in Hong Kong he was incarcerated by the Japanese in 1942-1943. Afterwards, he continued to live in Hong Kong and retired to Sevenoaks in the UK in 1962.

The present lot belongs to an important group of closely related jade carvings carved with a luohan in a mountain grotto. The subject matter may have derived from a woodblock print on the theme, printed in the 18th century catalogue Gu yu tu pu (古玉圖譜), attributed to the Southern Song dynasty. The luohans depicted in the present lot may be identified as Angaja and Kalika, two of the Sixteen Luohans. Ding Guanpeng, ‘Seventeen Paintings of Buddha and Luohans’, the 21st year of the Qianlong reign corresponding to 1756; image courtesy of Shenyang Palace Museum. 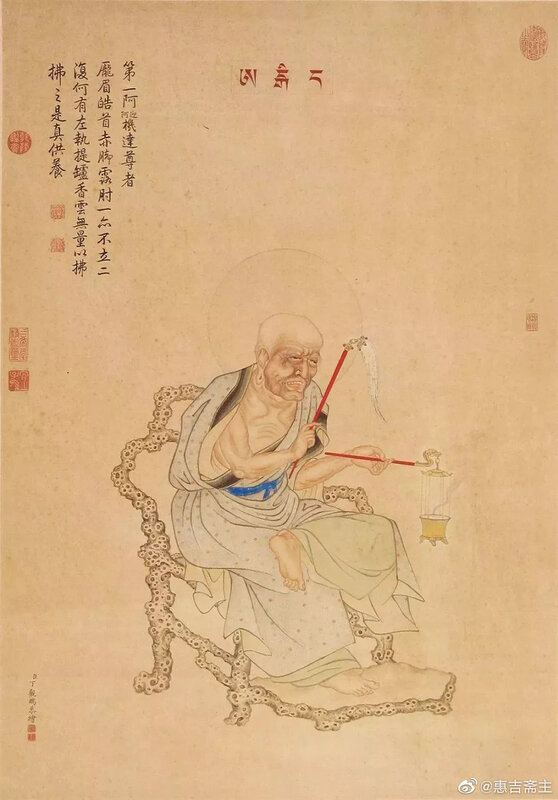 Ding Guanpeng, ‘Seventeen Paintings of Buddha and Luohans’, the 21st year of the Qianlong reign corresponding to 1756; image courtesy of Shenyang Palace Museum

Buddhism as the foremost state religion during the Qing dynasty received great attention during the reign of the Qianlong emperor. The emperor ordered the Court painter Ding Guanpeng (1708-1771) to paint the sixteen luohans after the original set by Guanxiu (823-912) that he had seen during his visit to Hangzhou in 1757. Importantly, the inscriptions on the jade boulder are the same as on the paintings by Ding Guanpeng. One side is inscribed:

'The First Luohan, Angaja, with long eyebrows and bright faced, with bare feet and elbows revealed, if one does not stand, how can the other two stand, to the left the incense burner, fragrant clouds without limit, blowing gently, this is the true way to make offerings'.

The other side is inscribed:

'The Fourth Luohan, Kalika, hearing it he is enlightened, with broad heart and stout body, the sweet fragrance reaches his chants, how narrow how broad, with both fingers pointing, each ringing the gold bell, that is ringing and quiet, silent and not silent'.

For related examples of jade 'luohan' boulders carved with inscriptions see one from the National Palace Museum, Taipei, with the inscription denoting the luohan Cūdapanthaka, illustrated in The Refined Taste of the Emperor: Special Exhibition of Archaic and Pictorial Jades of the Qing Court, Taipei, 1997, p.148, fig.43; another example in the Palace Museum, Beijing, is illustrated in The Complete Collection of Treasures of the Palace Museum: Jadeware (II), Shanghai, 2008, p.76, no.56; two further examples, one un-inscribed but of similar jade stone and inclusions, 17th/18th century, and another with an inscription, 18th century, in the British Museum, London, illustrated by J.Rawson, Chinese Jade: From the Neolithic to the Qing, London, 1995, pp.409-410, no.29:19 and fig.1; and one inscribed and carved with the luohan Kanaka, 18th century, from the Hebert R. Bishop Collection, is in the Metropolitan Museum of Art, New York (acc.no.02.18.640). See also a related jade 'luohan' inscribed boulder, Qianlong, illustrated by R.Kerr, et al., Chinese Antiquities from the Wou Kiuan Collection, Surrey, 2011, pl.177.