Art Deco takes it away: Cartier bracelet sells for CHF/$ 6.1 million in Geneva

Art Deco takes it away: Cartier bracelet sells for CHF/$ 6.1 million in Geneva GENEVA.- In the wake of the many strong results already seen this year for Art Deco jewels, demand remained strong today in Geneva for pieces from the 1920s and 30s, widely recognised as the golden era of jewellery. Six months after the benchmark price of $3.6 million achieved for the “Beaumont Necklace” at Sotheby’s in May, a Cartier sapphire and diamond bracelet realised one of the highest prices at auction for an Art Deco bracelet when, pursued by six bidders, it sold to an Asian collector for CHF 6,072,900 / $6,135,451 (Lot 453, est. CHF/$ 2-3m). Created in 1927 and coming from an Asian-American collection, the bracelet is set with a sensational Burmese cabochon sapphire weighing 46.07 carats. It was one of the highlights of a sale totalling CHF 53,382,275 / $53,932,112, characterised by strong global interest in Art Deco, along with a number of healthy results for single diamonds.

“The magic of Art Deco continues to exert its spell on collectors around the world, with so much of tonight’s rich offering racing away. With its sensational ‘sugar loaf’ Burmese sapphire and powerful geometric design, the Cartier bracelet that led tonight’s sale was a true masterpiece, among the most important Art Deco pieces we’ve ever handled. It came from the collection of a visionary Asian-American collector whose eye for great jewellery resonated with international collectors.” --David Bennett, Worldwide Chairman, Sotheby’s Jewellery Division

FACTS AND FIGURES AT A GLANCE
• 80% of lots sold

• Participants came from 49 countries around the world

ART DECO SOARS
The result for the Cartier bracelet was echoed by further strong prices for Art Deco pieces – which together achieved a combined total of CHF 9.5m / $9.6m, against a pre-sale estimate of $3.9-6 million. Further highlights included: 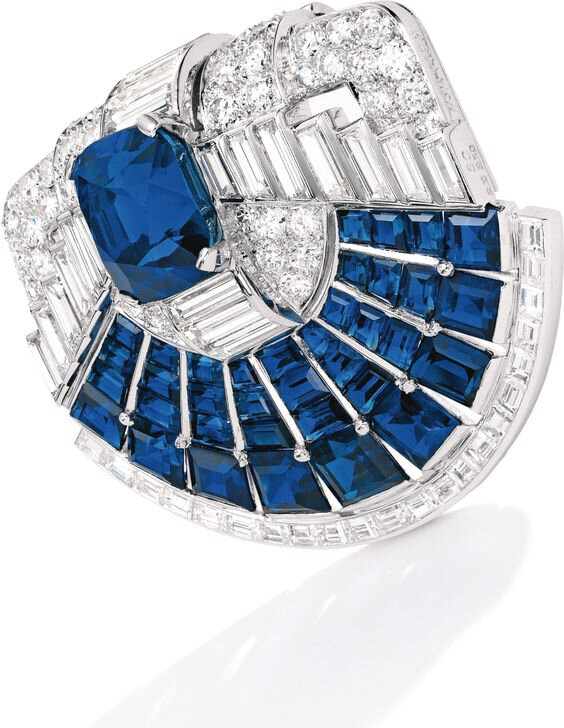 Also accompanied by a Cartier certificate of authenticity. 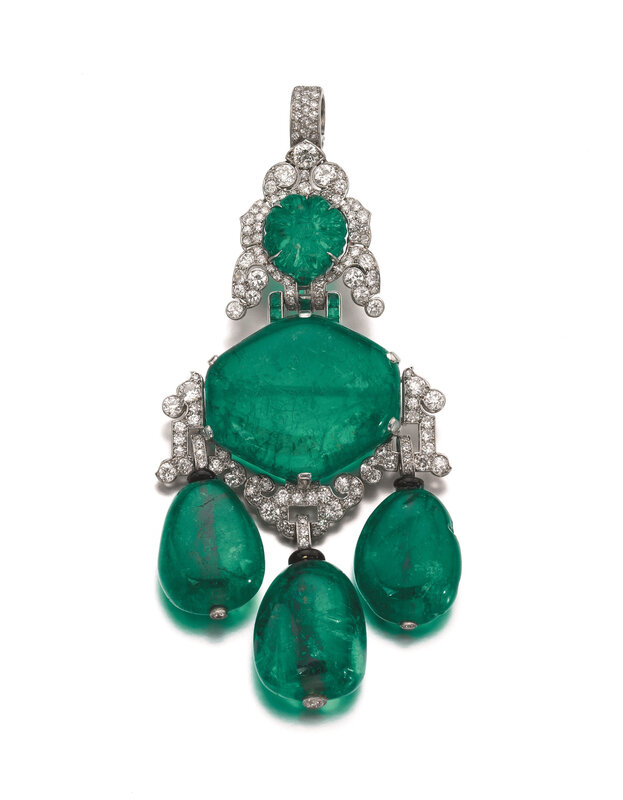 Accompanied by SSEF report no. 108686, stating that the emeralds are of Colombian origin, with a minor to a moderate amount of oil in fissures.

Literature: Cf.: Hans Nadelhoffer, Cartier Jewelers Extraordinary, London, 1984, pg. 183 for a photograph of the pendant in its original form, as part of a necklace.

Note: As the image in Hans Nadelhoffers book, Cartier Jeweler Extraordinary, shows, this pendant was originally the central element of an important necklace composed of a diamond link chain flanked by pierced cabochon emeralds, dated 1927, a perfect example of Cartier's Indian style.

This pendant also calls to mind the brooch worn by Marjorie Merriweather Post, captured in a painting by Giulio de Blaas in 1929. Cartier's use of mughal stones in jewellery was an important aspect of their Indian style, these designs were dominant between 1913 and 1930. Provenance: Formerly in the collection of Comtesse Molitor.

TOP DIAMONDS
• 80% of the diamonds offered in the evening session sold, including: Accompanied by GIA report no. 2195207712, stating that the diamond, is Fancy Intense Purple-Pink, Natural Colour, VVS2 Clarity; together with a Type IIa classification letter.

JEWELS FROM AN ASIAN-AMERICAN COLLECTION GLITTER
Tuesday’s sale included a selection of jewels from an Asian-American collection, which followed a first instalment in September in New York. Overall, the collection was 93% sold, achieving a total of $ 12.7m (Est. $6.1-8.9m).