A rare sandstone head of a luohan, 14th-15th century

A rare sandstone head of a luohan, 14th-15th century 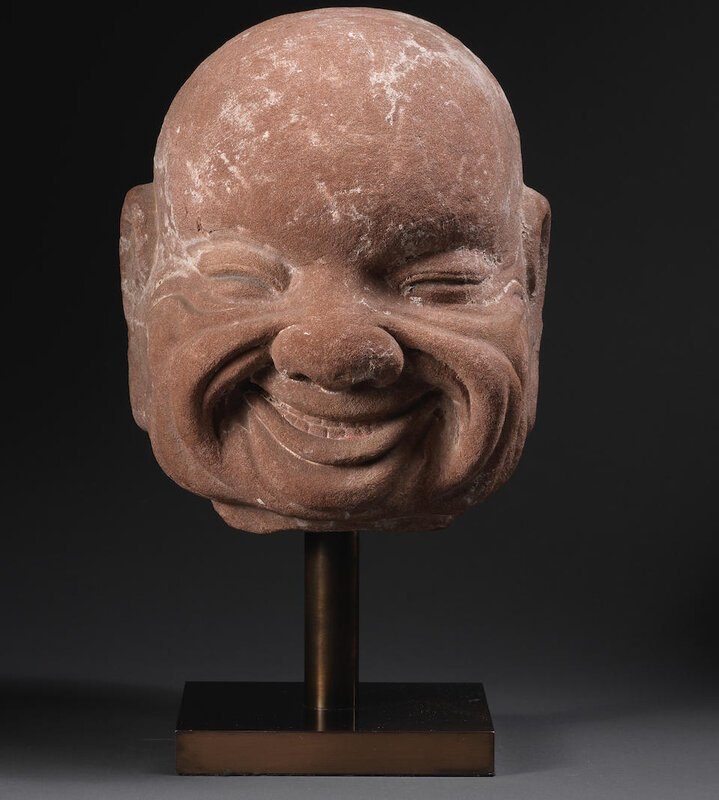 Expressively carved with a broad smile and deep-cut lines, beneath a short bulbous nose and narrow squinting eyes, all between large pendulous ears, the stone of dark reddish-brown tone, stand.

Note: Animated like portraits of luohans are extremely rare, most examples being straightforward and somewhat idealised renditions. The present lot most probably originates from Sichuan Province, which has a long tradition of depicting lively, caricature-like effigies of humans, as is evident in some of its pottery figures of entertainers, such as a figure of the grimacing drummer in the Sichuan Provincial Museum; see R.Bagley, Ancient Sichuan: Treasures from a Lost Civilization, Seattle, 2001, p.298, no.111. A more naturalistic trend in sculpture was initiated by Song dynasty sculptors, who also often depicted human figures with animated, expressive faces. This trend continued into the subsequent Yuan and Ming dynasties. Two sandstone sculptures of arhats, one with a tiger, the other with a dragon, were discovered in 1980 at the Boshan Temple site in Fu county, Shaanxi Province; see H.Rogers, China 5000 Years: Innovation and Transformation in the Arts, New York, 1998, no.177.