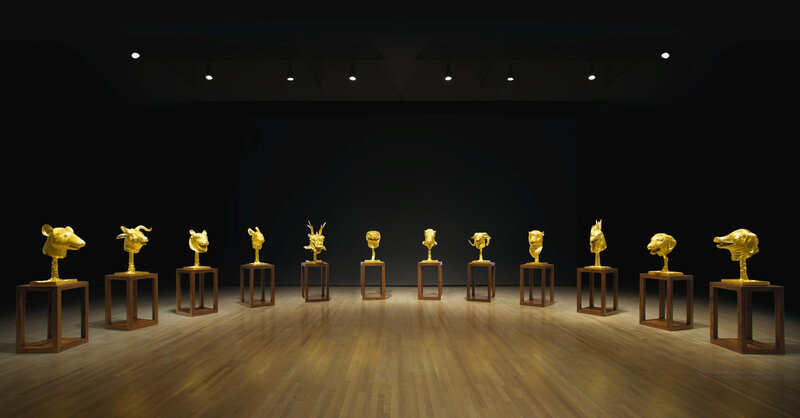 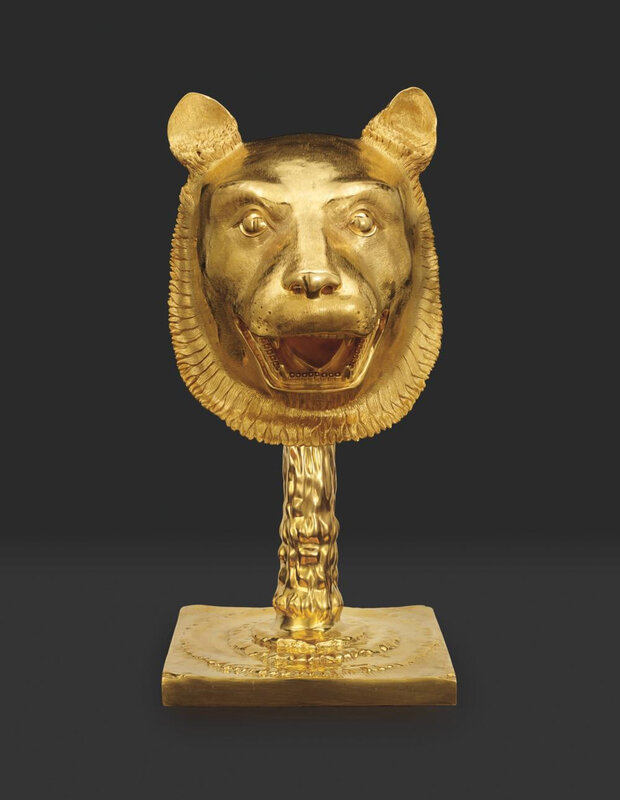 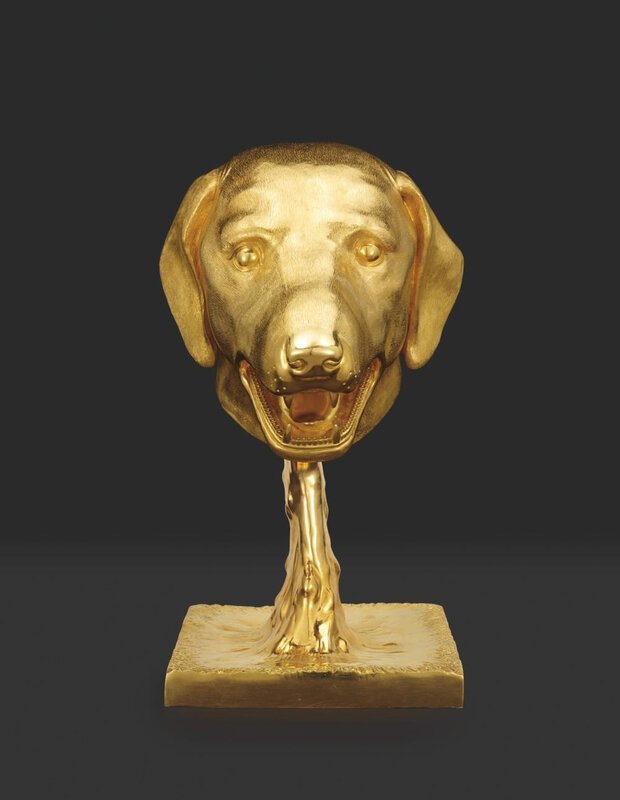 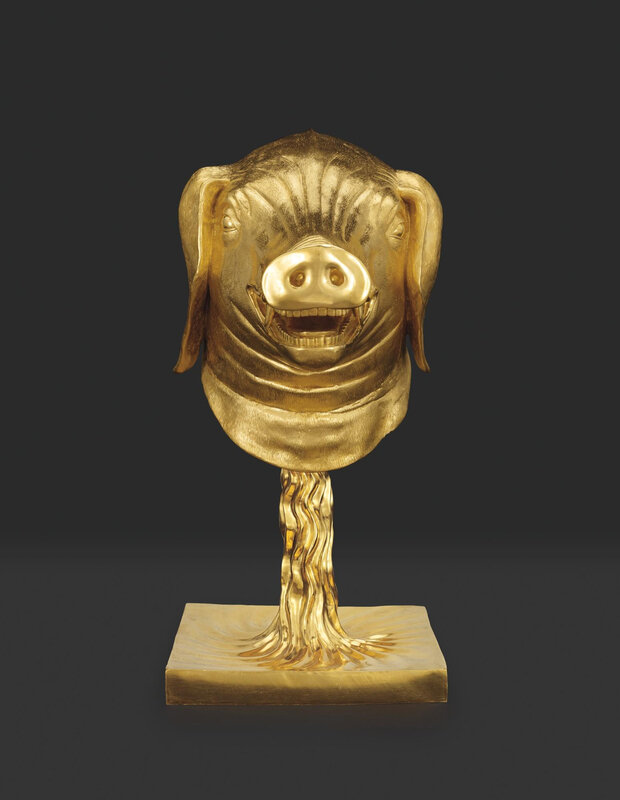 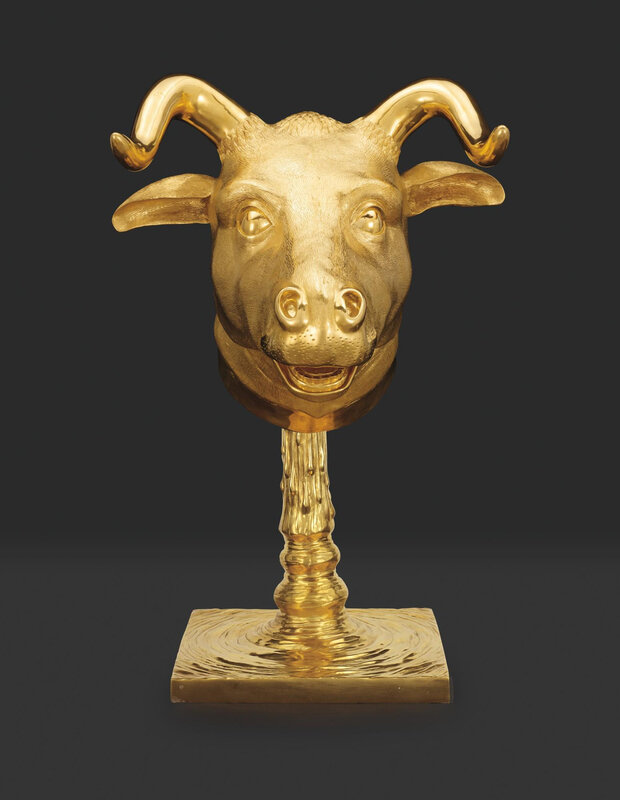 Each zodiac head is accompanied by a certificate of authenticity signed by the artist and dated 2010.

Provenance: Friedman Benda, New York
Acquired from the above by the present owner in 2014.

Note: “My work is always dealing with real or fake, authenticity, what the value is, and how the value relates to current political and social understandings and misunderstandings. I think there’s a strong humorous aspect there.” Ai Weiwei, 2011

Ai Weiwei’s iconic series of sculptures, the Circle of Animals/Zodiac Heads, is a significant international project that simultaneously signals his position as China’s most pervasive artist whilst exploring themes of globalization and identity that inform his work. The series recreates the twelve traditional Chinese zodiac sculptures that once adorned the Yuanming Yuan fountain clock, an artistic and architectural centerpiece of the imperial gardens outside of Beijing enjoyed by several Qing dynasty rulers in the 18th and 19th centuries.

The original zodiac head sculptures were subsequently looted from the fountain by French and British soldiers during the Opium Wars. This devastating plundering was one of a series of episodes that are now collectively known as the “century of humiliation,” spanning approximately 1840 to 1945. In 1976 following the death of Chairman Mao, the demise of the Cultural Revolution which sought to destroy cultural artifacts, and the subsequent reopening of China’s economy towards the end of the 20th century, there was a renewed interest in the zodiac heads both in China and abroad. Only seven of the original heads still exist and the whereabouts of five remain unknown. As a result of the increased fervor for the ancient Chinese zodiac heads over the past several decades, their monetary value on the international art market has soared and they have since become touchstones of an ardent—and at times contentious—sense of nationalism.

By creating his contemporary interpretation of the original imperial zodiac heads with the Circle of Animals/Zodiac Heads sculptures, Ai Weiwei effectively reunites the twelve animals once again, thus completing the full set by re-envisioning the five that are still missing. He conceived the Circle of Animals/Zodiac Heads body of work in two distinct versions: a monumental Bronze size to be displayed outdoors as public art; and a collector size Gold set for museum display and closer in size to the originals.

Through this significant body of work, Ai Weiwei explores notions of authenticity and patrimony by encouraging a provocation of what is "real" and what is "fake" in relation to cultural artifacts and contemporary artwork. His vision to recreate the legendary sculptures in a gleaming gold patina elevates the objects to the status of sacred relics, further emphasizing the melodrama surrounding the looting of the originals and the mystery of the missing five heads. In the present work Ai Weiwei both engages and tinkers with a revisionist history aesthetic, prodding viewers to consider the ways in which a historical narrative can be refabricated and thus live on through artistic icons.

Widely known as an outspoken critic of the Chinese authorities, Ai Weiwei’s project gained attention in 2011 when the launch of this body of work coincided with his arrest in Beijing, after which he was held for 81 days without official charges and denied exit from the country until 2015. Out of these circumstances, the wide-reaching scope of the Zodiac Heads/Circle of Animals series has bolstered the artist's global presence and acclaim. Having toured the world during the last decade, today this sculptural series exists as one of the most famous and widely exhibited contemporary sculptures in the history of global contemporary art.

Since the inaugural installation of Circle of Animals/Zodiac Heads: Bronze in New York at the historic Pulitzer Fountain in 2011, editions from the Circle of Animals/Zodiac Heads: Gold series have been exhibited in international public collections across the world. Subsequent venues have included: Musée d’art contemporain de Montréal (May - September 2012); Museum of Contemporary Art San Diego (February - July 2012); LongHouse Reserve, East Hampton (August - October 2013); Garage Center for Contemporary Art, Moscow (February - March 2014); The Crow Collection of Asian Art, Dallas (September 2013 - March 2014); Martin-Gropius-Bau, Berlin (April - July 2014); Blenheim Palace, Oxfordshire (October 2014 - April 2015); Palm Springs Museum of Art (December 2014 - May 2015); Portland Art Museum (May - September 2015); Phoenix Art Museum (October - January 2016); National Gallery of Victoria, Melbourne (December 2015 - August 2016); Tucson Museum of Art (February - June 2016); Nevada Museum of Art, Reno (July - October 2016); Museum fur kunst und Gewerbe, Hamburg (November - March 2018); The Mucern, Marseille (June - November 2018); Farnsworth Museum, Rockland (March - December 2018); Kunstsammlung-Nordhein-Westfalen, Dusseldorf (May - September 2019); Vero Beach Museum of Art (June - December 2019); and the Arken Museum of Modern Art, Skovvej, Denmark, where an edition of the piece has remained on long-term loan since 2013. Commenting on this work, Ai Weiwei has stated: “It is pointing to many different issues—of course to China, to myself, to all the people who would question whether the work is valuable or not valuable, real or not real, or better than real, or not as good as real. And how it’s going to be shown, why it’s being shown, how it’s being sold, and why people are paying for it.”

The Circle of Animals/Zodiac Heads series embodies the diversity of Ai Weiwei’s practice and boldly reflects his unrelenting scrutiny of power structures and his advocacy of independent thought and free expression, stimulating dialogues regarding the relationship between history and value. Ai Weiwei’s art relates to significant themes within Chinese history, yet the artistic vocabularies through which these are explored resonate strongly with his time spent in the United States. Feeling suffocated by the social climate of his home country, the artist moved to New York in 1981 and lived there for over a decade. During that time, Ai was influenced by the works of Western masters of modern art, including Marcel Duchamp, Andy Warhol and Jasper Johns. Deeply shaped by Duchamp’s artistic philosophy, Ai Weiwei inherited a kind of radical daring: a willingness to challenge and demystify the notionally unquestionable. This quality can also be traced back to his father Ai Qing, a prolific Chinese poet and member of the League of Left-Wing Writers. During the Cultural Revolution Ai Qing was labeled a rightist and marginalized by the government.

Upon his return to China in 1993, Ai Weiwei began to use the creative devices of subversion, misappropriation, readymade objects, juxtaposition, and irony to address issues regarding a country that had visibly gone through drastic social and economic transformations and was now faced with intense socio-political concerns. Inspired by symbolically rich Chinese objects, the artist adopts critical perspectives on cultural authority that address the different kinds of significance that objects accrue—whether cultural, historical, or monetary—to initiate a dialogue wherein these issues are not only animated but questioned. By bringing the creative techniques of Duchamp and Dadaism into contact with Chinese history and culture, Ai raises important questions regarding the notions of authenticity and value in art. Along these themes, the present work corresponds with the socio-political realities of China today, raising questions about authenticity, authorship, and re-engagement with the past through artifactual relics.

As reflected in the power and beauty of his Circle of Animals/Zodiac Heads, Ai Weiwei’s intention is to examine the efficacy of looking back into history and mining value from the past. It is not simply China’s yesteryear, but also China’s ongoing relationship to its past that engages Ai Weiwei. In his oeuvre, excavating the many historical references can invest even the most unassuming objects with layers of meaning, bringing expanded depth, richness and dimensionality to the work.