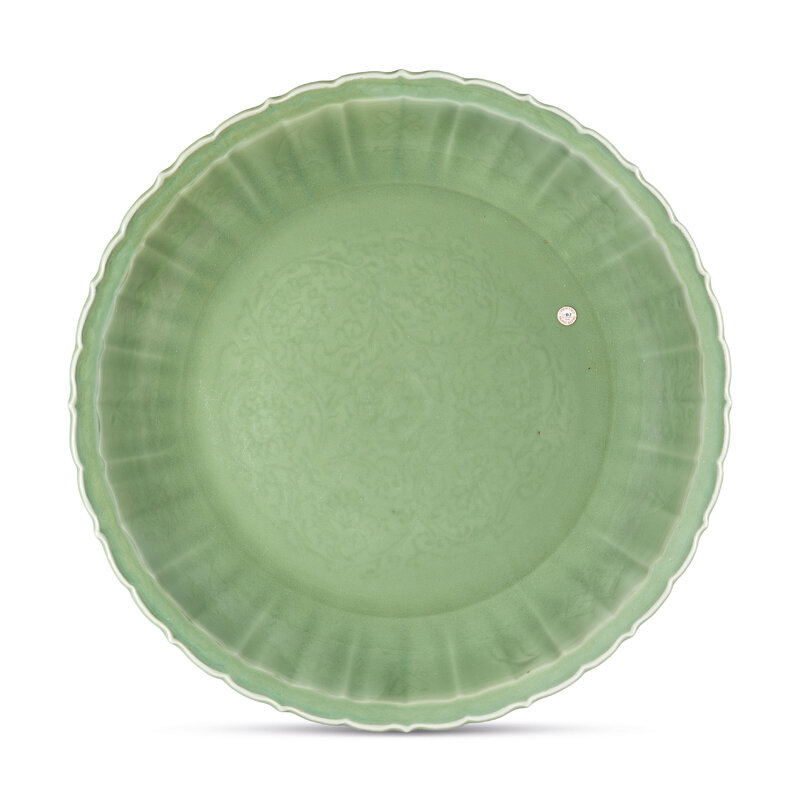 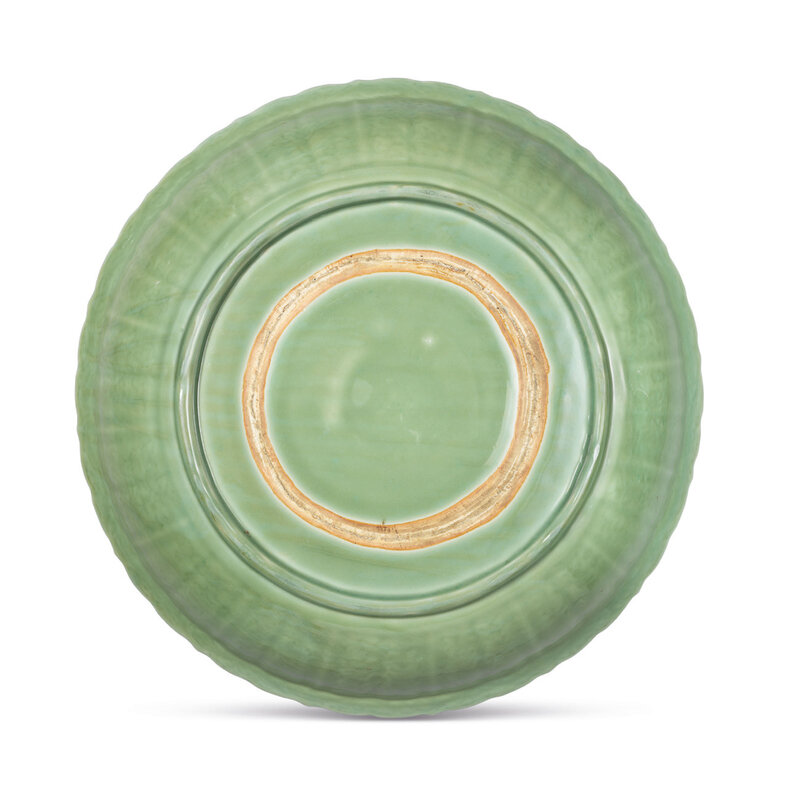 The dish is heavily potted with fluted sides rising from a short foot ring to a lobed rim, the interior carved with a flowering, leafy lotus scroll encircling a central bloom, and the cavetto with precious objects, the exterior is further incised with lotus sprays. The dish is covered with a thick and even celadon glaze of sea green tone, box.

The provenance of this extremely large and exceedingly impressive early Ming Longquan celadon dish or charger emphasises the admiration for these remarkable celadon wares amongst Asian collectors. In the 20th century this vessel has been in some of the most prestigious Chinese collections – the E.T. Chow collection, the T.Y Chao collection, and the T.T. Tsui collection. This large dish dates to the second half of the 14th century, during the reign of the Hongwu emperor (1368-98), when this bracket lobed form was at its height of popularity, and it is possible, even probable, that the dish was made for the court.

Longquan celadons have long been admired for the beauty of their glazes, which combine a range of subtle green colours with delicate translucency and unctuous texture, as on the current dish. The name Longquan does not come from a specific kiln site, but from the name of the market town of Longquan in southern Zhejiang province, to which the ceramics were brought for sale and distribution. The kilns on this region inherited the legacy of the stonewares produced at the Yue kilns in the same province, and indeed in the Northern Song period the Longquan kilns produced wares very similar to Yue wares. However, in the Southern Song period, no doubt influenced by the refined tastes of members of the elite, who accompanied the new Southern Song court when it settled at Hangzhou, the Longquan kilns began to develop a refined, high-quality, soft green celadon glaze, that was to prove hugely popular both in China and overseas.

While the Longquan glaze was perfected during the Southern Song period, production expanded considerably in the succeeding Yuan dynasty, rising over time to such an extent that some 300 kilns were active in the Longquan region. New shapes and styles of decoration were introduced, and pieces of impressive size began to be made at the Longquan kilns. While some of the larger pieces, such as the large dishes, were probably initially inspired by the requirements of patrons from Western Asia, these and other large forms came to be appreciated by patrons in both Western and East Asia. Fine Longquan celadons were, for example, especially popular in Japan, and some of the Chinese celadon wares from the Song to early Ming periods have remained as treasures of important Japanese temples and family collections.

In the early Ming dynasty, not only did the celadon-glazed wares from the Longquan kilns retain their popularity, both within China and for export to other parts of Asia, records also make clear that some of these Longquan celadons were made for the court, under the supervision of government officials sent from the capital. Significantly, juan 1094 of the Da Ming Huidian states that in the 26th year of the Hongwu reign [AD 1393] imperial wares were fired at the Yao and Chu kilns – i.e. at Jingdezhen in Jiangxi and at the Longquan kilns of Zhejiang.

Given the quality of the current dish and the extreme rarity of dishes over 50 cm. in diameter - from either the Longquan or the Jingdezhen kilns - in the early Ming dynasty, it seems very likely that this dish, with a diameter of 62 cm., would have been made for the court.

As mentioned above, during the Yuan dynasty, in the mid-14th century, the Longquan kilns, and those producing porcelain at Jingdezhen, adapted some of their finest ceramics to accommodate the tastes of patrons from the west of China’s borders - either those currently resident in China or those who received Chinese ceramics as gifts or as part of the export trade. Large dishes with bracket-lobed rims were among the new forms, which appeared at both the Longquan and Jingdezhen kilns at that time. During the Yuan dynasty the large dishes with bracket-lobed rims made at the Jingdezhen kilns do not appear to have been made with lobed sides, although a small number of those from the Longquan kilns did have this feature. A large Yuan dynasty dish with bracket-lobed rim and lobed sides from the collection of the Longquan Celadon Museum is illustrated in Longquan Celadon of China, Hangzhou, 1998, pl. 120. However, it is notable that the lobes on this Yuan dynasty are not so well defined as those on the current dish. Smaller Yuan dynasty versions of this form with central decoration are amongst the Longquan dishes in the Ardebil collection (D: 37.6) illustrated by T. Misugi, Chinese Porcelain Collections in the Near East – Topkapi and Ardebil, vol. 3, Hong Kong, 1981, no. A 232, which has a moulded central motif; and also in the cargo of the Sinan wreck illustrated in the 1977 exhibition catalogue, Seoul, 1977, exhibit 117 (D: 33.6 cm.). Towards the end of the Yuan dynasty the large dishes made at both the Longquan and the Jingdezhen kilns were more frequently made with simple flattened rims, without lobing.

With the advent of the Hongwu reign of the Ming dynasty, the ceramic industry received new impetus and bracket-lobed rims reappeared at both kilns, and with the added feature of well-defined lobing to the sides, that conformed to the shape of the mouth rims. It is interesting to note that at the Jingdezhen kilns there was no consistency in the form of the foot ring on these large bracket lobed dishes. The Palace Museum, Beijing, has in its collection several blue and white bracket-lobed large dishes some of which have conforming lobing carried from the mouth rim and sides into the foot ring, and some of which have simple circular foot rings. Comparison in this regard can be made between a 44.8 cm. diameter blue and white dish and a 45.5. cm. diameter blue and white dish, illustrated in Blue and White Porcelain with Underglaze Red (I), The Complete Collection of Treasures of the Palace Museum, 34, Hong Kong, 2000, p. 22, no. 20 and p. 23, no. 21, respectively. The large bracket-lobed Longquan dishes usually have circular foot rings, as in the case of the current dish, which, typical of the fine-quality Longquan dishes, has a fully glazed foot ring and has been fired on a cylindrical setter resting on an unglazed circle on the exterior base, inside the foot ring.

A large early Ming dish of this form, with carved decoration of fruiting branches in the central medallion and plant sprays on the sides, from the collection of the Topkapi Saray Museum, Istanbul is illustrated by R. Fujioka and G. Hasebe in Ceramic Art of the World, vol. 14, Ming Dynasty, Tokyo, 1976, no. 131 (D: 55.5 cm.). Another large bracket-lobed Longquan dish (D: 45 cm.) with a pine tree in a rocky landscape, from the same collection, is illustrated in colour by J. Ayers and R. Krahl in Chinese Ceramics in the Topkapi Saray Museum Istanbul, vol. 1, London, 1986, p. 228, no. 239. The Topkapi Saray collection includes several other large bracket-lobed Longquan dishes from the late 14th-early 15th century, (illustrated ibid., pp. 300-301 and 303) but, with one exception, all of these are significantly smaller than the current example.

Only two dishes of similar massive size (D: 62 cm.) with the same decoration as the current dish appear to be known. Significantly, one of these is in the collection of the Palace Museum, Beijing (illustrated in Longquan qingci, Beijing, 1966, pl. 57), and the other is in the collection of the Ottoman Turkish court, in the Topkai Saray (illustrated Chinese Ceramics in the Topkapi Saray Museum Istanbul, op. cit., p. 304, no. 244). While there has been some debate as to whether these three dishes date to the Hongwu reign (1368-98) or the Yongle reign (1403-24), both the crisply defined shape and certain aspects of the decoration seem, to the current author, to suggest a Hongwu date. The specific form of the floral scroll in the centre of these three dishes resembles that seen on some Hongwu underglaze red decorated vessels from the Jingdezhen kilns. A case in point is the scroll around the internal sides of a large Hongwu bowl decorated in underglaze copper red in the collection of the Palace Museum, Beijing (illustrated in Blue and White Porcelain with Underglaze Red (I), op. cit., p. 242, no. 223) (fig. 1). The inclusion of auspicious emblems – such as double -cash, coral, double -lozenge, crossed horns, and lotus flower- in the decoration of the interior sides of the current dish is very rare on Longquan celadons. However, these emblems were used on Yuan dynasty porcelain vessels decorated in underglaze blue from the Jingdezhen kilns. 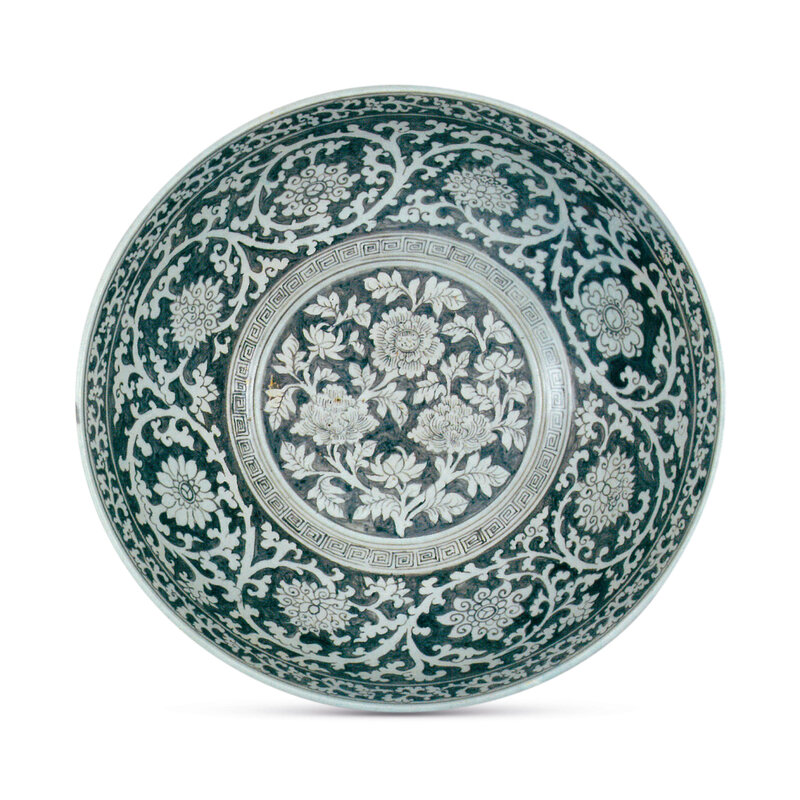 fig. 1. A large bowl decorated in underglaze copper red, Hongwu period (1368-1398, in the collection of the Palace Museum, Beijing.

In the light of all this information, therefore, it seems probable that the current magnificent dish was made for the court of the Hongwu emperor, whether for his own use or as a gift for a fellow monarch.