A rare small wucai ‘Dragon and Phoenix’ dish, Wanli six-character mark and of the period (1573-1619)

A rare small wucai ‘Dragon and Phoenix’ dish, Wanli six-character mark and of the period (1573-1619) 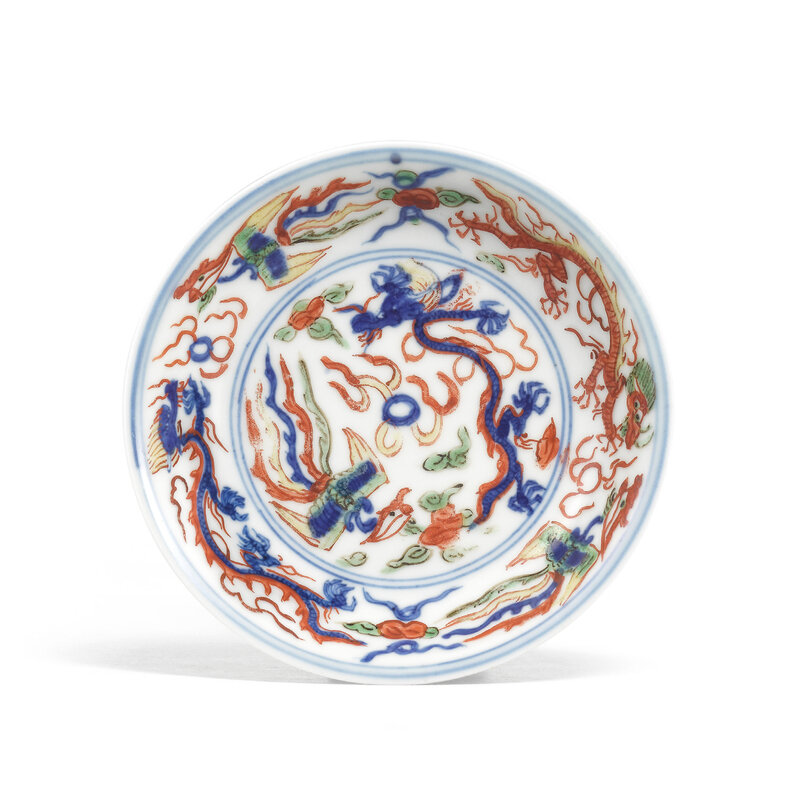 The dish is painted to the centre with a five-clawed dragon and phoenix in flight in pursuit of a flaming pearl, the cavetto is similarly painted with two pairs of dragons and phoenix interspersed by ruyi clouds. The exterior is painted with eight alternating flowering and fruiting sprays, Japanese wood box.

Note: The dragon-and-phoenix design symbolising the Emperor and the Empress is a popular motif on Wanli imperial porcelain. The current design with the dragon-and-phoenix pair shown in pursuit of a flaming pearl more often appears on larger wucai dishes from this period. The current dish is further distinguished by its especially vibrant enamel colours, fine quality of painting, and the elaborate composition featuring dragon-and-phoenix design on both the centre and the cavetto. For other small Wanli wucai dishes with the dragon-and-phoenix motif on the centre but surrounded by flowering and fruiting sprays on the cavetto, compare to an example sold at Christie’s London, 22 July 2006, lot 145, and another from the Meiyintang Collection, sold at Sotheby’s Hong Kong, 7 April 2011, lot 69.

The Japanese wood box accompanying this dish is attached with a Sakamoto label.