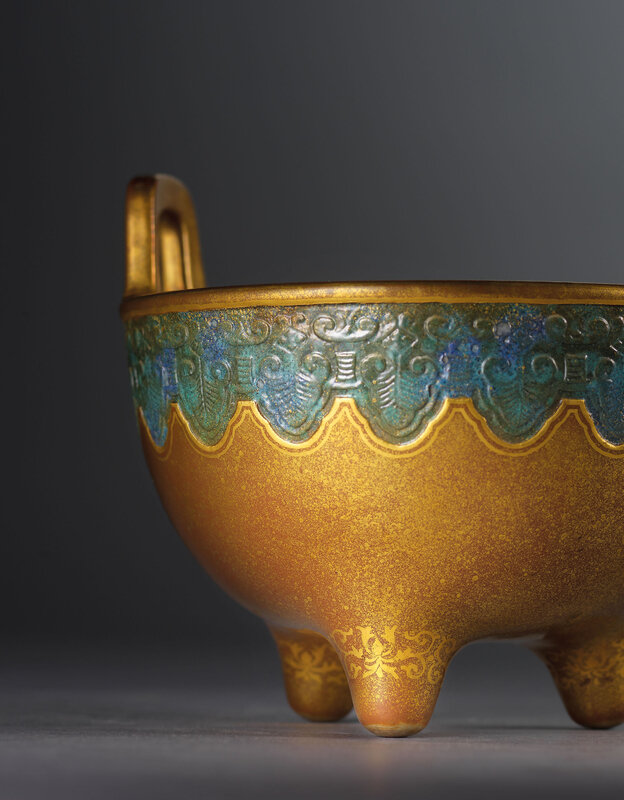 The censer is finely potted with a bulbous body supported on three short tapering feet, rising to a lipped rim surmounted by two upright loop handles. The mouth is moulded with a band of archaistic cicada blades applied with greenish-turquoise enamel simulating archaic bronze. The rest of the censer is covered overall with a russet glaze suffused with gold specks in imitation of gilt-bronze. The handles are further decorated in gilt with dots, and the feet with classic scrolls, box.

Note: With the technical advances and virtuosity of porcelain production during the Qianlong period, potters from the official kilns were able to experiment with different ways and techniques to satisfy the emperor's penchant for the curious and archaic. Porcelain was frequently used to simulate works of art made from other media, including hardstones, cloisonné enamels, wood, lacquer, and in this instance bronze. The present censer is all the more unusual as it incorporates elements of both archaic bronzes and later gilt-splashed bronzes. The moulded band of cicada blades applied with greenish-turquoise around the mouth is undoubtedly an effort to imitate the patina and decorations found on archaic bronzes from the Shang and Zhou dynasties. On the other hand, the russet glaze suffused with gold dust is reminiscent of the gilt-splashed bronze censers from the later Ming and Qing dynasties, often made for the scholar’s desks.

Porcelain censers combining these two elements are extremely rare. A censer which is similarly enamelled in turquoise and gilt-russet in imitation of gilt-bronze, but with a different pattern featuring dragons reserved in cartouches, is in the National Palace Museum, Taipei, included in A Special Exhibition of Incense Burners and Perfumers Throughout the Dynasties, 1994, illustrated in the Catalogue, no. 83. Another censer with a similar colour scheme, as part of a set with an incense box and tool vase, is illustrated ibid., no. 89 (fig. 1). A porcelain censer in the form of a fangding, also combining turquoise and russet, was formerly in the E.T. Chow Collection, sold at Sotheby's Hong Kong, 16 December 1980, lot 528, and a gu-shaped vase from the J.M. Hu Collection was sold at Christie’s Hong Kong, 30 May 2005, lot 1239 (fig. 2). A  set with an imitation of gilt-bronze incense box and tool vase, Collection of the National Palace Museum, Taipei. 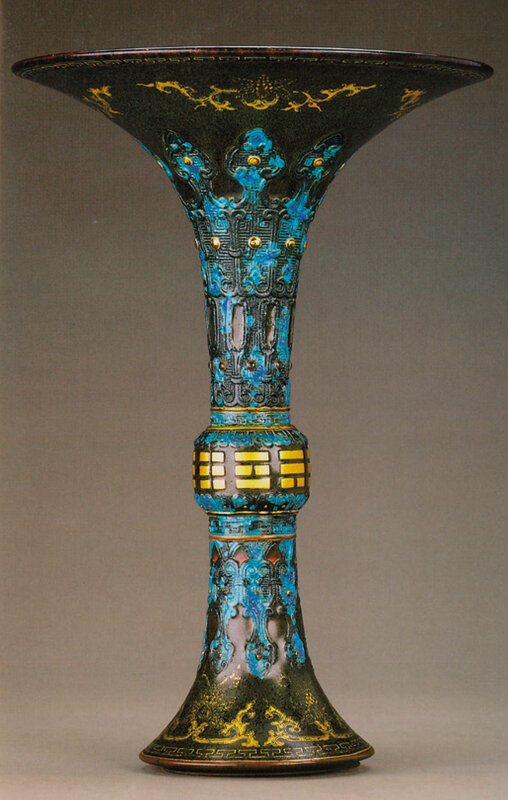 Compare also to a porcelain tripod censer decorated in a variety of colours in imitation of cloisonné enamels, formerly in the J.M. Hu Collection, sold at Christie’s Hong Kong, 30 May 2005, lot 1240.