The vase is sturdily potted and decorated in cobalt blue of brilliant sapphire tones with two broad lotus scrolls on the neck and body, separated by bands of trefoil, keyfret, classic scroll and ruyi-heads. The mouth is decorated with pendent blades below a keyfret band. The foot is encircled with a lotus lappet band above a wave and keyfret border.

Note: While Qianlong-marked blue and white hexagonal vases are known, very few examples are decorated with lotus scrolls across the body and neck like the current vase. Most surviving examples are decorated with detached sprays of fruits and flowers, such as lot 2918 in this sale, and the one illustrated in Geng Baochang, Ming Qing Ciqi Jianding, Qingdai bufen, fig. 146. 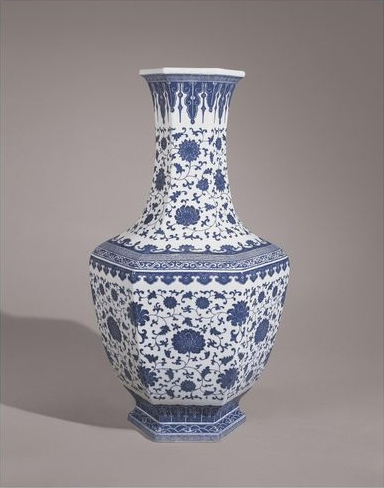