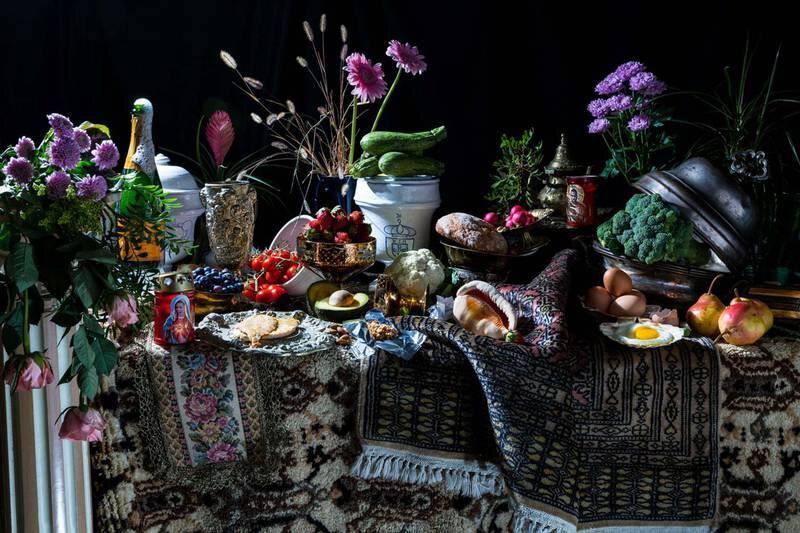 Kim Kardashian’s post-baby Atkins Diet is in full force with this lavish spread. She’s been an internet and tv sensation over the last decade and people either love or hate her. This struggle is further exemplified by the Chrysanthemums – in Japan these serve as a symbol of the Emperor and the Imperial family, whereas in Italy these traditionally signify death. Pick and choose your side. By the way, have you found Yeezus yet?

We can all agree that Steve Jobs was a genius with unconventional health habits. Perhaps it’s a diet we’ve procrastinated to do one day …still thinking…but probably would be easier if bacon grew on trees, am I right?

This work is inspired by Francesco Fieravino, Still Life with Fruit, Plates and Dishes on a Turkey Carpet (1650 – 1680) and Adriaen Coorte, A Sprig of Gooseberries on a Stone Plinth (1699).

Want to know Andy Warhol’s secret to keeping the weight off? Order food in restaurants, move it around in your plate and don’t eat it. Simple and effective. But would you do it? And you know how your mother told you never to play with your food, right? Well clearly Andy forked that idea.

Feast your eyes on this HUGE fast-food composition for one of the most controversial politicians in the world today. Most of this man’s diet consists of junk food eaten at the comfort of his own desk, the richness of it further emphasized by the lush red in the composition. Don’t miss out the little messages scattered throughout the table!

Bone appetit! This spread portrays the expensive and lavish taste of the North Korean leader for French and Italian cheese and ham placed alongside rotting food. This and the partially blown candles symbolize that there is a fine line between light and dark, good and evil, life and death. Speaking of blown, have you spotted the dick?

Dan Bannino is an Italian-born photographer whose work has been aptly described as ‘Pop-Baroque’ or ‘Pop-Renaissance’. He combines influences coming from the Old Masters and the rich cultural inheritance of his native Italy with inspiration drawn from the world of contemporary pop culture displayed on the internet or TV.

Dan began his Still Diets back in 2014 where he feeds people’s desires to know the secrets behind celebrity diets. Dan researches those elements as symbols of vanity inspired by Dutch artists from the Golden Age particularly from the works of Adriaen Coorte, Adriaen van Utrecht, Francesco Fieravino, Abraham van Beyeren, Adam Bernaert and Aelbert Jansz van der Schoor among others. The decorative abundance is today, as was in those days, allusive to the theme of vanitas. The result is a mash-up of old and new, baroque and modern, filled with innuendos. The element of discovery sure plays a large part of deciphering Dan’s works!