HONG KONG.- Tiancheng International Jewellery and Jadeite Autumn Auction will take place on 27 November, offering over 210 lots of handpicked jewellery and jadeite pieces. Leading the auction is an astonishing 31.44-carat Burmese “Pigeon's Blood” Ruby Ring. The sale is also highlighted by a finely translucent emerald green jadeite bangle and a stunning pair of 24.93 and 23.80-carat Colombian Emerald Earrings by Graff. They are complemented by a lavish selection of coloured gemstones and outstanding pieces by acclaimed jewellers and designers that will delight all connoisseurs.

Ms.Connie Huang, Head of Tiancheng International’s Jewellery Department, remarks, “Tiancheng International has always striven to present jewellery of remarkable quality. This season, we are thrilled to offer one of the most significant rubies on the auction market over the past decade. Hailing from Burma, this natural unheated ruby boasts a staggering weight of 31.44 carats. Added to that is the most desirable “pigeon’s blood” colour, making this majestic stone an irresistible choice for discerning collectors.” 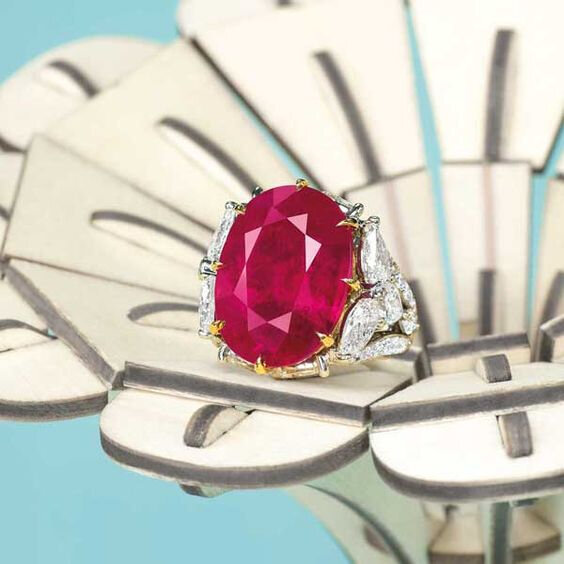 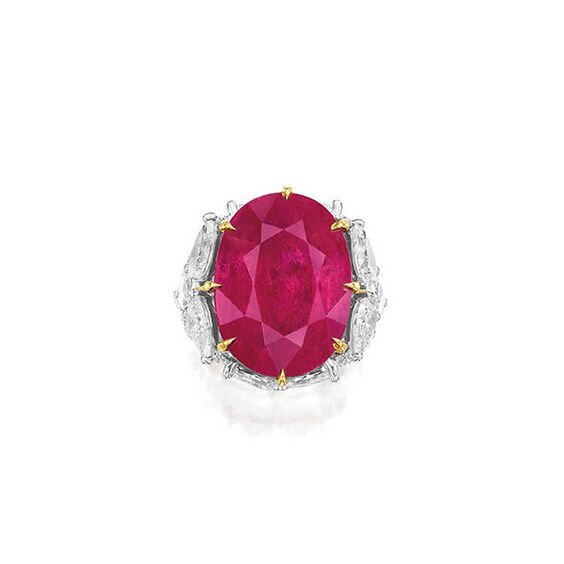 Accompanied by GIA report numbered 6311313916, dated 15 November 2018, stating that the 31.44 carat ruby is natural, Vivid Red colour, of Burmese origin, with no indications of heating; with comments, stating that 'The color appearance of this stone is described in the trade as "Pigeon's Blood".';

Gübelin report numbered 19041113, dated 17 April 2019, stating that the 31.44 carat ruby is natural, Red colour, of Burmese origin, with no indications of heating; along with an information sheet, stating that 'Large rubies of gem-quality are rarely found in nature...The demand for natural, unheated rubies kept growing while the supply of such gems remains highly limited, making natural rubies of gem-quality from all major sources, such as Burma (Myanmar), Mozambique, Madagascar, Kenya, Tanzania, Vietnam, Afghanistan and Tajikistan, difficult to find.'

Among the numerous sources of rubies across the world, Burma is doubtless the most prestigious. Pigeon’s blood rubies are exceptional and highly prized by connoisseurs. However, as ruby mines are virtually depleted, sizeable natural Burmese pigeon’s blood rubies of high calibre are like gold dust. Weighing over 30 carats, this natural unheated Burmese ruby is suffused with an intense “pigeon’s blood” hue. With an impressive size and sheer brilliance, this spectacular piece stands as one of the most important rubies to have appeared on the auction market over the past decade.