Arts of Africa, the Americas and Indonesia at Sotheby's Paris

Arts of Africa, the Americas and Indonesia at Sotheby's Paris Paris - On 4 December, Sotheby’s will present a new sale dedicated to African art, complemented with a selection of works from America and Indonesia. Oceania, a sale dedicated exclusively to Oceanic art, will also take place at Sotheby’s on the same day.

This select group of 66 lots will bring together works chosen for their aesthetic and powerful forms, such as the extremely rare Grebo mask from the Vérité collection. The pieces have also been selected for their exceptional quality – several have been kept in the same collection for several decades. For the first time, Sotheby’s will exhibit these works alongside pieces from the contemporary art auction.

Exhibited in 1955 at the legendary exhibition, Les Arts africains, held in Paris at the Cercle Volney, this Grebo mask exemplifies the impact African art had on 20th century Western art (lot 70 – estimate: €200,000-€300,000). Pablo Picasso himself owned a similar mask, which is said to have triggered a line of artistic study that led him to create, in 1912, his famous Guitar, the first Cubist sculpture. Grebo artists were known to produce radically simplified forms in a dramatic departure from naturalism.

This reinvention of the human figure, in which powerful forms are combined with geometric elegance and the expressionism of polychromatic contrasts, is revealed here in one of the most accomplished works within one of the rarest corpora of African art. 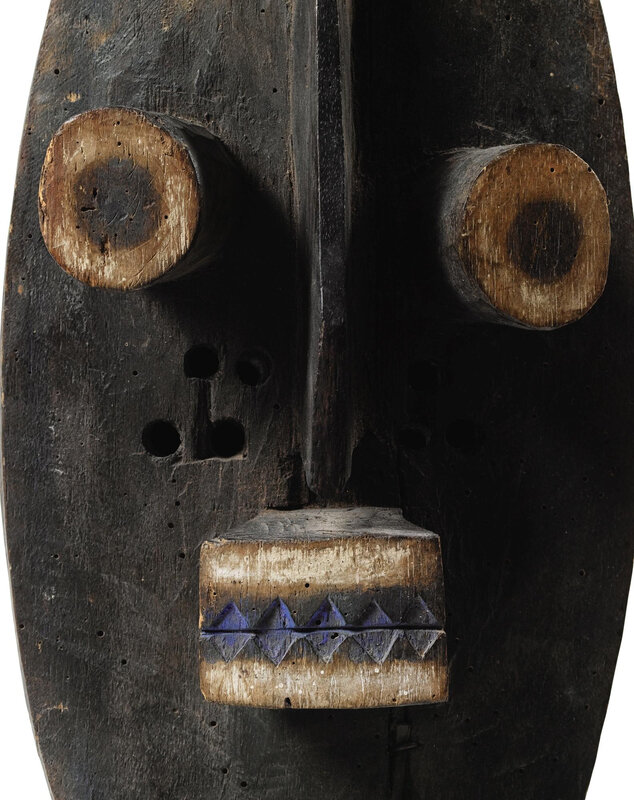 Offered at auction for the first time in nearly 30 years, this Kota reliquary figure, called “Janus” because of its dual faces, has immense ritualistic value, and its type is rare in Western collections (lot 52 – estimate: €180,000-€250,000). The two faces are identified as different genders: a male face on the side with the bulging forehead, and a female one on the concave side, illustrating the essential duality between original man and woman. These large effigies were also known as mbulu-viti, and are notable for their exceptional craftsmanship, characterised by the use of plated metal on a wooden core, unusual in Africa. This piece is particularly sophisticated, with virtuoso metal work in superbly contrasting colours. 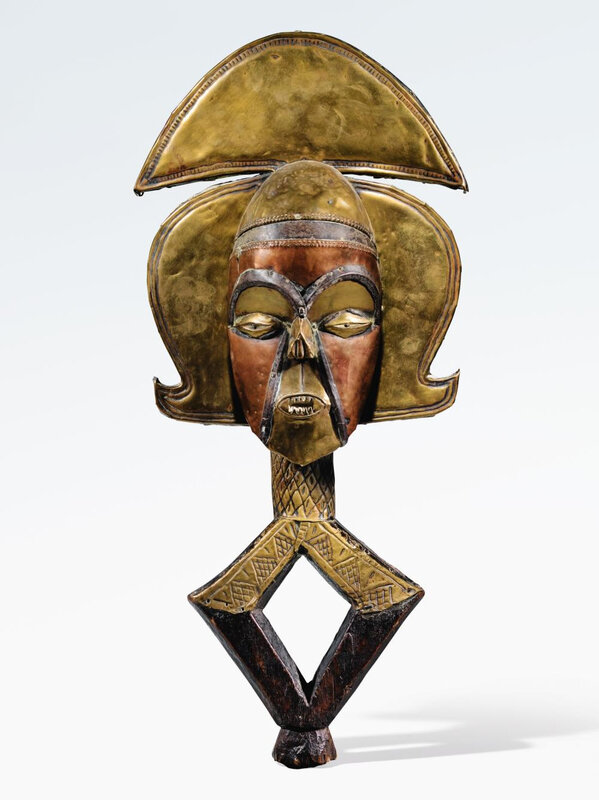 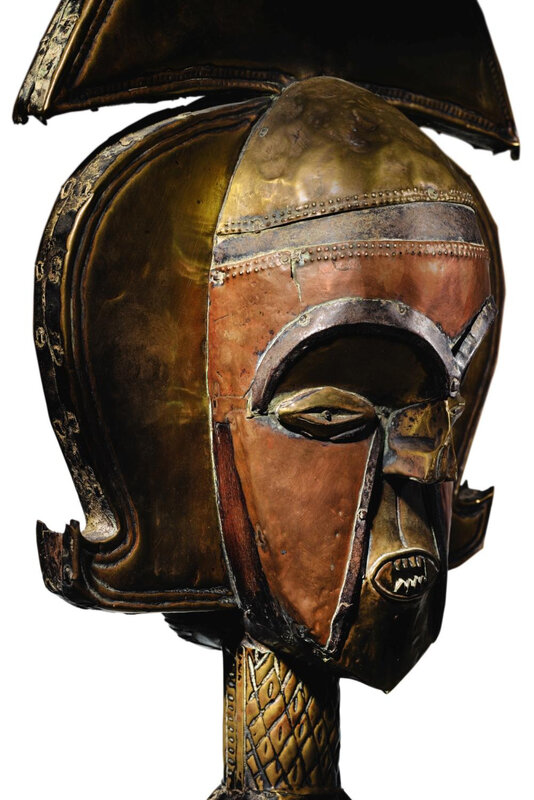 Also included in the sale is a rare Mbole mask, Democratic Republic of Congo (lot 56 – estimate: €70,000- €100,000), which is on the market for the first time in more than 40 years. It stands out for its minimalist linear beauty and sophisticated execution as well as its great age, attested by its dark patina. Discovered relatively late, Mbole art represents one of the rarest corpora of African art. A masterpiece of invention in the representation of the face, pared down to a two-dimensional form, and in the refined structure of the sculpture, this mask is represents one of the most beautiful examples of this rare type. 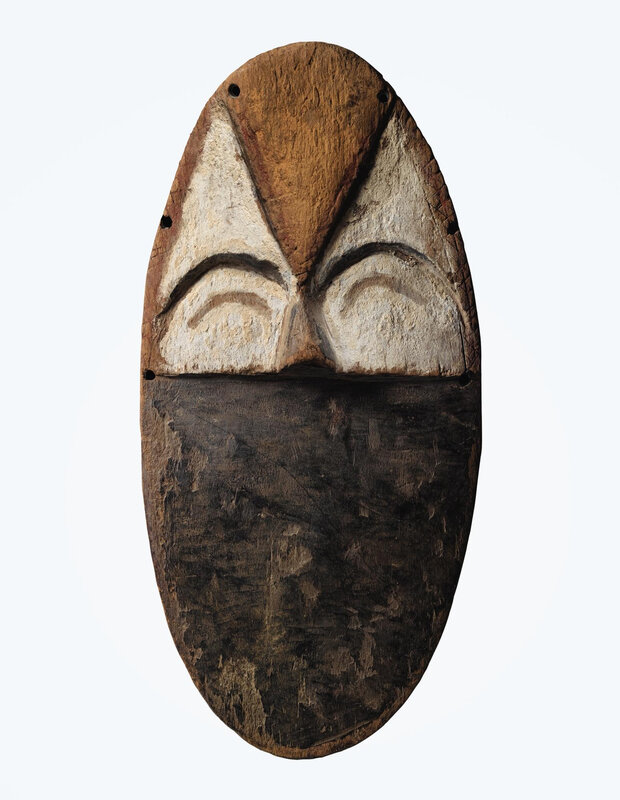 Another dual-sided object is this Tlingit rattle that illustrates the richness and sophistication of creations from British Columbia (lot 50 – estimate: €30,000-€50,000). Selected by Jacques Kerchache for his Head exhibition in 1966, this work is one of the most remarkable featured in that seminal exhibition.

The two faces are rendered in the traditional Tlingit style but display a rare degree of aesthetic accomplishment. Matching this technical quality is the delicacy of the painted motifs and the remnants of pigments, which attest to the age of the work. 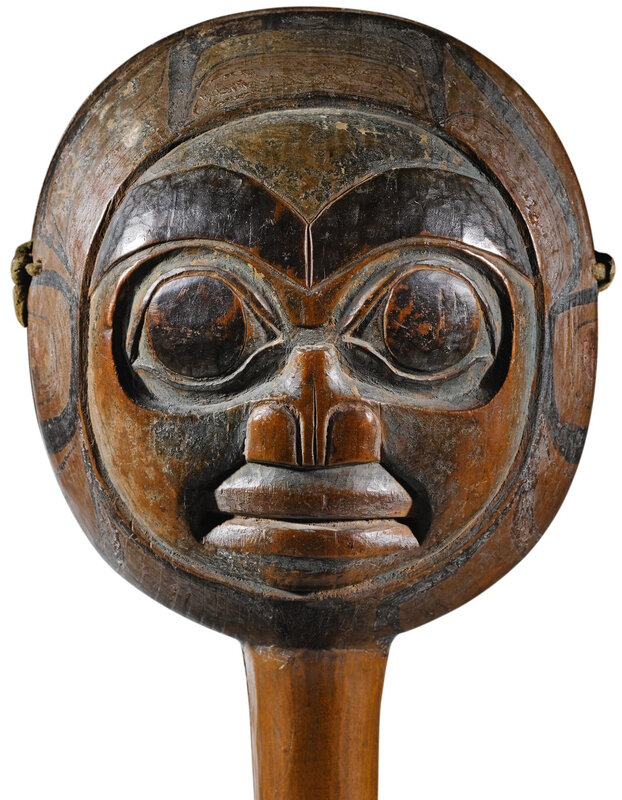 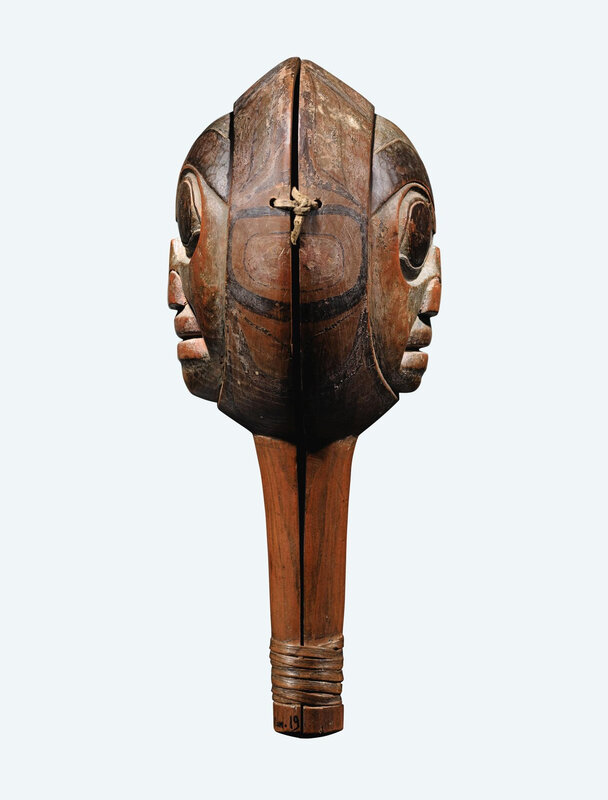 A British Columbian rattle, from the Tsimshian culture, takes the form of a raven, on which sits a human figure (lot 87 – estimate: €50,000-€70,000). With a Chilkat cape, head-dress with ermine train and seal whiskers, the raven rattle is one of the three main insignia used in chiefs' dances, which evoke high-ranking figures meeting supernatural beings. Further north, this marine ivory head comes from Alaska and is associated with the Okvik culture, which spread across St Lawrence Island between 100 and 400 AD. This culture offersthe first important signs of the Inuit way of life (lot 51 – estimate: €30,000- €50,000). Its statues, particularly the strong tradition of marine ivory sculpture, reveal the complex social and political life of the communities. The characteristic stylisation is complemented by the beautiful dark orange patina and the veins of the ivory underneath. Tau tau wooden figures represent the apex of the art of the Toraja group from the mountains in the north of Sulawesi. The figures are portraits commissioned by highranking families to commemorate their deceased ancestors.

Sotheby’s is pleased to offer an antique tau tau figure, representing a male ancestor. The example is notable for its elongated, flowing body and the intense expressions of the face (lot 62 – estimate: €60,000-€90,000). Previously, it would have been richly adorned in a sarong, gold jewellery, head ornaments, sacred knife and family attributes. Today, it remains imposing in its original form. The beautiful patina of the jackfruit wood – reserved for statues of the highest dignitaries – merges with the elegant and rare carved and sculpted tattoos. Commentaires sur Arts of Africa, the Americas and Indonesia at Sotheby's Paris