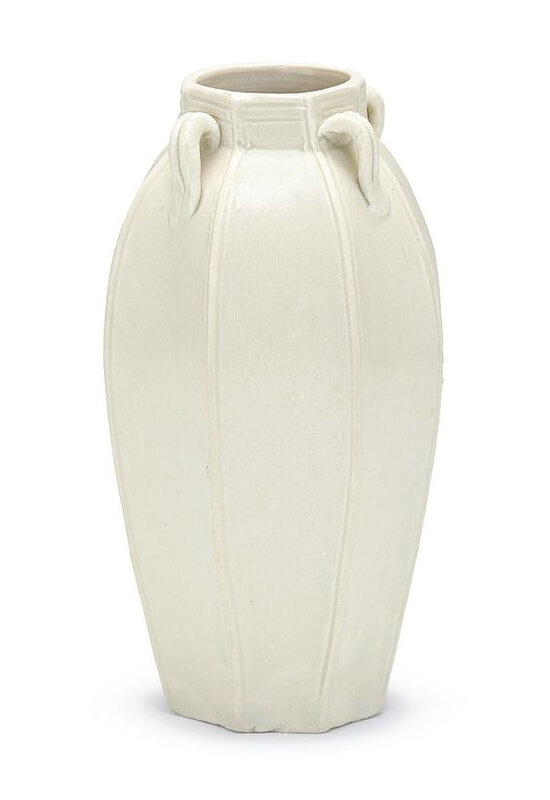 of octagonal section with tapered rounded sides and a short neck, set with four small loop handles, applied with a rich cream-white glaze with characteristic teardrops.

Note: Vases of this charming octagonal form, with four small handles at the shoulder, are an unusual product of the Dingyao kilns in Henan province and only a few related examples are known; a slightly smaller vase in the Palace Museum, Beijing, is illustrated in Selection of Ding Ware, Beijing, 2012, pl. 37; another was sold twice at Christie's London, 12th October 1970, lot 84, and 5th April 1976, lot 11; a third with angular lugs handles, from the Carl Kempe collection, is illustrated in Bo Gyllensvärd, Chinese Ceramics in the Carl Kempe Collection, Stockholm, 1964, pl. 437; and a fourth example covered overall in a brown glaze, in the Meiyintang collection, is published in Regina Krahl, Chinese Ceramics from the Meiyintang Collection, vol. III, London, 2006, pl. 1439.

Small octagonal vases were popular in the Song dynasty and were produced at kilns throughout China; see for example a Yue vase and cover in the Zhenjiang Museum, illustrated in Complete Collection of Chinese Ceramics. Song, vol. 8, Shanghai, 1999, pl. 52; another sold in these rooms, 2nd/3rd June 2016, lot 601; and a Yaozhou example, carved with a leafy scroll on each facet, in the Meiyintang collection, illustrated op. cit., pl. 1489, together with a qingbai vase of this form, pl. 1590.