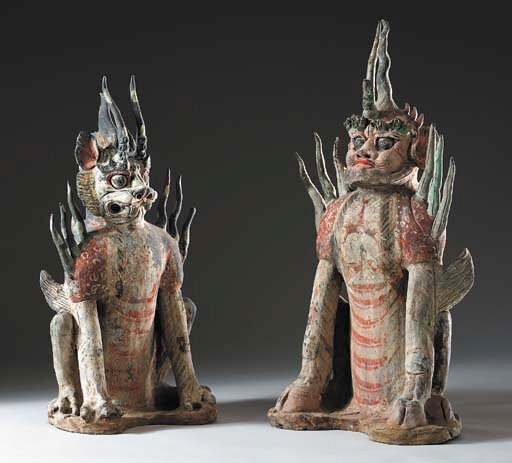 Both shown seated with forelegs stiffly braced on the shaped base, one modeled with bearded human face, elephantine ears, a single horn in front of the twist of hair rising from the top of the head, and cloven hoofs, the other with leonine face below a pair of horns, with a crest at the back of the head, both with spikes at the shoulders and painted with a ribbed belly and foliate decoration on the chest, all in red, cream, pale green, black and white with traces of gilding.

Note: Tomb guardians in the form of composite beasts first begin to appear during the Six Dynasties period, at the same time that Buddhist images with guardian lions are first seen and produced in China. They usually occur in pairs, one with a human head and the other with a lion head. Their supernatural powers, indicated by antlers, spiky flanges and flames, enable them to calmly confront evil spirits and protect any precincts within their gaze.

An earth spirit similarly decorated with boldly painted designs rendered in this same palette of mint-green, black, orange and white was sold in our Los Angeles rooms, 7 May 1999, lot 16.

The result of Oxford Authentication Ltd. thermoluminescence test no. C100u99 is consistent with the dating of this lot.