The Gerda and Gottfried Hertel Collection (lots 329 – 343) with primarily archaic Chinese bronzes, the equally exciting Gerda Sökeland Collection with important Tibetan thangkas and a second part featuring a fine selection of Tibetan and Nepalese sculptures. No less remarkable is the collection of Japanese inrô from the property of German lady ... A cabinet on four feet with decorative spandrels, with a double door with beaded panels, inside two shelves and two drawers, set on a low cabinet with two drawers and an open shelf with a geometric pattern in openwork. Copper alloy lock plates and pulls. (2) Of slender form, decorated with lotus and scrolls, bats, pomegranate and other symbols. With pierced cash coin at the top and painted in iron-red with five bats (wufu) and bamboo.

Provenance: Collection Mikhael Tressel (1813-1946), Rhineland-Palatinate, who was stationed as sergeant major of the German hunter battalion during the boxer rebellion until 1902, and probably acquired the stand during this time, and thence by descent. With rounded sides, the centre decorated with the wufu in iron-red, hovering around the branches of a fruiting peach tree growing from a blue cliff above crested waves, the underside with bats in pairs between fruit sprays, each reserved with a shou medallion. Six-character mark Yongzheng. Buttoned sideways and with a slit in front and back. In couched gold-wrapped threads eight dragons (the ninth dragon probably inside) amidst lions, Buddhist emblems and lingzhi clouds, above golden lishui with small dragons amidst waves, the collar and sleeve borders of black satin with dragons, clouds, and emblems in couched golden threads. Lined with blue silk. A bit faded to the front. Framed and glazed. Buttoned sideways and with a slit in front and back. In couched gold-wrapped threads, flat and Peking stitch eight dragons (the ninth dragon probably inside) with flaming pearls amidst Buddhist emblems, bats and lingzhi clouds, above golden lishui with small dragons amidst waves, the collar and sleeve borders of black satin with dragons in waves, pearls, bats and clouds. Lined with beige-coloured damast. A bit faded to the front. Framed and glazed. In shape of a lotus leaf, surrounded by waves which form the stand of the cup, the stems of the lotus bud and a rolled up leaf and the reeds with leaves and panicle form the handles, to the outside carved with flowering acquatic plants, wilted lotus flowers and a leaf, to the inside a reed and a crab. A few minor chips. In shape of a lotus leaf, carved to the outside with a lotus flower and a pod, reeds and a fruiting pomegranate branch, the foot rendered by billowing waves and the handle by bundled stems. Various chips of differing sizes.

The highlight takes the form of a large ding-type food vessel from North China, 5th century B.C., made during the Eastern Zhou/late Spring and Autumn period (lot 329, € 10/15,000). The Tibetan art shines with a strong offer of important thangkas. This field already has recorded growing interest in recent auctions and we are now proud to auction the Gerda Sökeland Collection (lots 305 – 314), which includes a black-ground thangka from the 17th century estimated at € 10/15,000, and a further important example from the 18th century valued at € 15/20,000 (lots 305 and 306). The collection is complemented by a selection of Tibetan and Nepalese sculptures (lots 435 – 444). 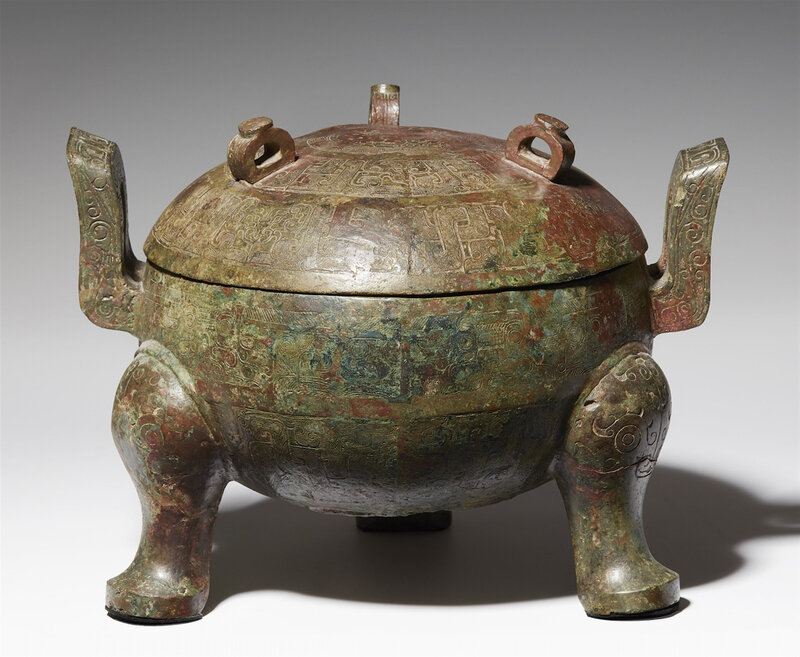 The basin stands on three bulbous legs with two inverted U-shaped handles of rectangular cross-section, the body with two wide registers with dissolved dragons detailed with meander on a plain ground separated by a thin undecorated band, the handles and upper parts of the legs with volutes. The flat-domed cover with three ring handles decorated with two concentric zones filled with the same type of decoration as on the body, the central roundel with volutes and spirals. Mould marks to the base and base. Various restorations to body and lid. 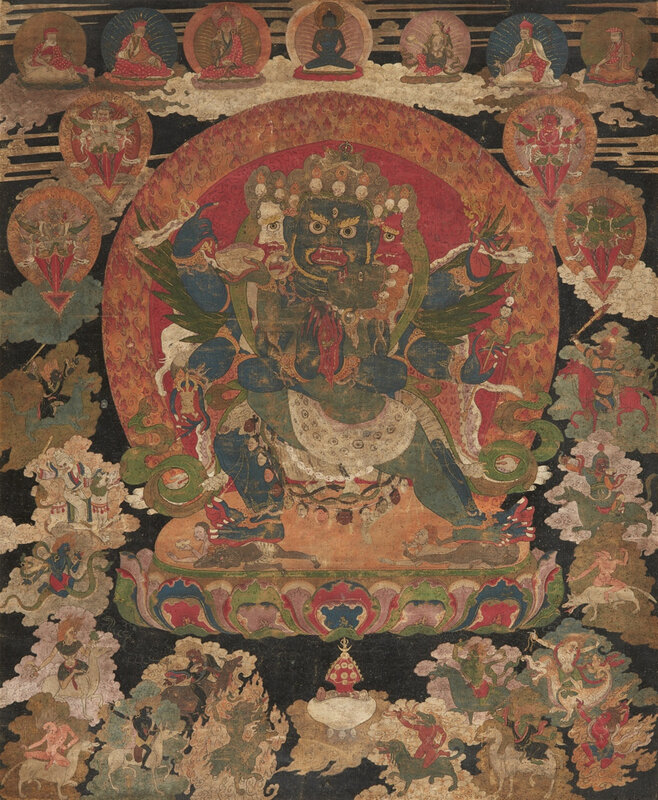 The wrathful deity of the Nyingma tradition with three faces, six arms, four legs and Garuda´s wings, standing with his consort in alidhasana atop a lotus throne, holding a phurbu, the iconographic feature of Vajrakila, in his primary hands, flanked by four kila-emanations, with Samantabhadra, Padmasambhava, the dakini Yeshe Tsogyal and four lamas in the sky and his retinue below. Framed and glazed. 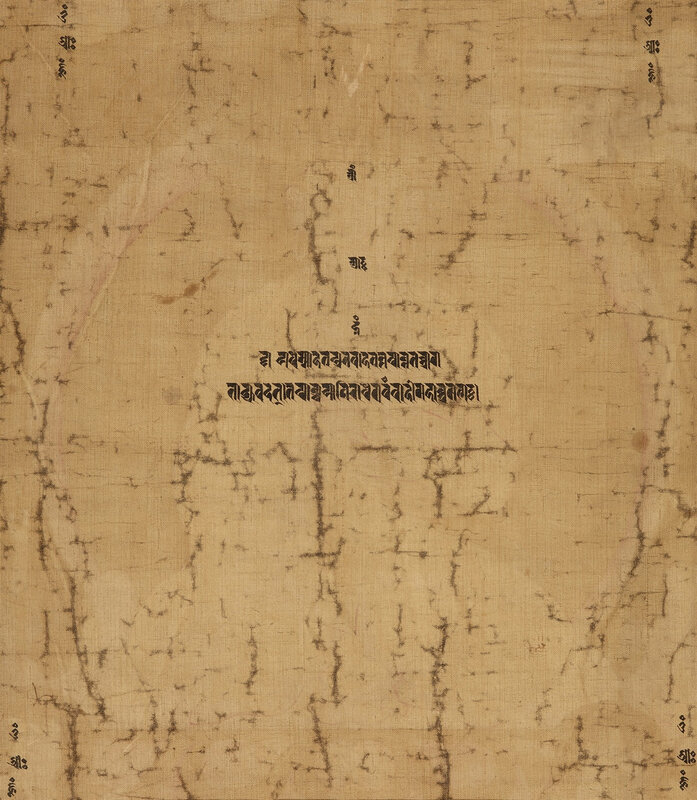 Seated on a lotus blossom above a throne, backed by a nimbus and aureole, with his hands in dharmacakramudra, and set amidst a green and mountainous landscape in a Tibetochinese style of the 18th century. Arhats, monks, the Indian gods Vishnu and Brahma are assembled to the Buddhas sides and a group of musicians as well as laymen bringing offerings in front of him. The upper sky with monks within a series of pavilions against a green landscape influenced by the Eastern Tibetan style. Inscription to the reverse. Framed and glazed.

Alongside high-quality lacquer works of art – as seen in previous auctions – a group of netsuke of remarkable quality and quantity is offered, one highlight of which takes the form of sansukumi from around 1880 for € 4/6,000 (lot 228). The market-fresh pieces are mostly from a private Hamburg collection. The winding snake with a flicking tongue encircles a skull and faces the climbing frog and crawling small snail on top of the cranium. Skin and details of the snake are excellently carved. The pupils of black glass, the inlaid eyes of the frog lost. Along with a card by F. Meinertzhagen with a coloured drawing of an almost identical netsuke.

From a further German private collection, that of a German lady, are 22 inrô (lots 111 – 132). These were collected from the early 1970s until 2002 with a special focus on quality and condition and are particularly noteworthy for the completeness of many of the ensembles. Thus, in some cases, inrô, ojime and netsuke match in motif and form splendid testimonies of artistic craftsmanship, paired with high standards of elegance. One of the top lots is a signed inrô from the mid-19th century (lot 121, € 4/5,000). Displaying an Okina dancer inlaid in rôgin, shakudô, silver and gold on one side, and a mask box and a fan on the other side, on a roiro ground with nashiji and clouds and pine saplings in gold takamaki-e and hiramaki-e and kirikane, at the top and bottom kinji. Nashiji and fundame to the inside. Signed in maki-e Koma Yasunori kore saku and Noriyuki on an inlaid gold tablet. Kinji ojime. A boxwood netsuke of a manzai dancer. 19th century. Small chip. Carved in three registers at the bottom with the figure of a standing Vishnu with a lotus, shanka, a chakra and a gada in his hands, surmounted by a seated Vishnu holding the same attributes in a different order with two female figures at his sides, and a very similar figurecomposition above. On the right set back from the main pilaster at the bottom a female figure with a lotus, Krishna as a boy and a lion standing on the trunk of an elephant. Standing with broad shoulders and right hand held forward, wearing a close-fitting sampot, the centre fold and diagonal folds thinly incised, while the draped sampot fabric covers the navel and the slightly portruding belly. On the relatively small head a cylindrical miter. Mounted on a black stand. With a slender body and broad shoulders, wearing a tight-fitting sampot held together by a belt, a pocket with a broad folds lying on the left thigh, and drawn up at the sides and the back. Mounted.