A fine and very rare late Ming large blue and white jar, Wanli six-character mark and of the period (1573-1619)

A fine and very rare late Ming large blue and white jar, Wanli six-character mark and of the period (1573-1619) 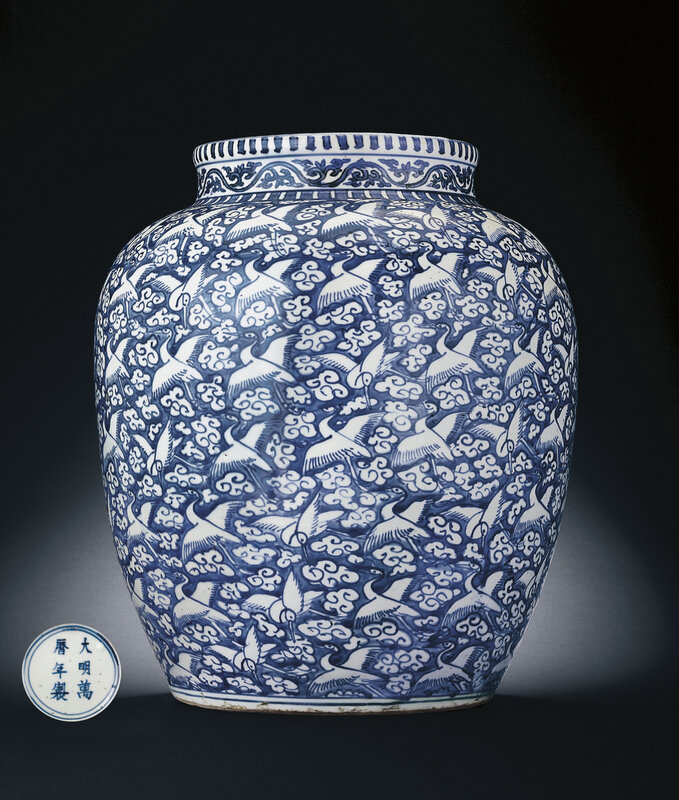 The large jar strongly potted and skilfully painted with vertical stripes around the lipped mouth, a classic scroll around the neck and the body of the vessel with cranes in flight amongst scrolling clouds reserved in white against a rich blue ground, the mark within a double- ring countersunk into the centre of the unglazed base, Japanese double wood boxes.

Cranes, as symbols of longevity, were a popular motif on Chinese ceramics. The design on this jar known as 'hundred cranes' was therefore particularly auspicious. The painting of designs on blue and white porcelains so that the ground appears blue and the individual motifs appear reserved in white was a feature of mid-Yuan and Xuande wares. This technique was time-consuming and required more skill than the normal blue on white designs, so that it fell from use during the later 15th century and early 16th century.

The use of reserve decoration became popular again in the Jiajing and Wanli periods when various designs, particularly those of floral motifs were depicted in white against a blue ground.

A similar jar was exhibited by the Kau Chi Society of Chinese Art, and illustrated in Exhibition of Ancient Chinese Ceramics, The Chinese University of Hong Kong, 1981, no. 88.