A Roman aquamarine ring stone with a portrait of Faustina Minor, circa 2nd century A.D.

A Roman aquamarine ring stone with a portrait of Faustina Minor, circa 2nd century A.D. 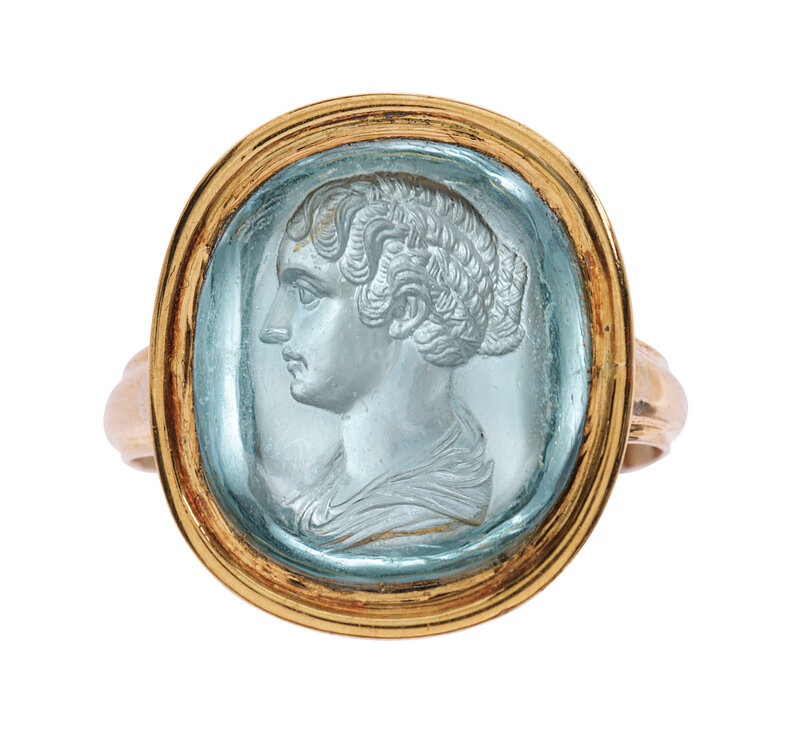 Provenance: Set in a gold ring dating to circa 1800.
English private collection, Surrey.

Note: Portrait intaglios in aquamarine (blue beryl) are exceedingly rare, perhaps a result of the material’s hardness and also because large stones were uncommon in antiquity. Like other variations of beryl (emeralds and golden beryl) aquamarine was virtually unknown in the Roman world before the mid-first century B.C. This changed due to the considerable Roman presence in the eastern Mediterranean following the conquest of Egypt in 31 B.C. At that time, the Romans took control of a well-established and significant trade route from India through the Red Sea ports to Alexandria. This route served as the main glyptic centre of the Hellenistic world, and thus rendering these rare gemstones far more accessible to Roman craftsmen.

Faustina Minor, Annia Galeria Faustina, born circa 125-130 A.D., was the daughter of the Emperor Antoninus Pius and Faustina Major (the Elder). Her great uncle, the Emperor Hadrian, betrothed her to Lucius Verus. However, her father Antoninus favored his wife's nephew, Marcus Aurelius, to whom she was eventually married. Antoninus succeeded Hadrian as Emperor, and eventually Marcus Aurelius inherited the Antonine throne as co-Emperor with Lucius Verus, thereupon Faustina became Augusta or Empress. Faustina bore at least twelve children for the Emperor, only six of whom survived past youth. Five were girls, with the future Emperor Commodus the only male heir. Their daughter Lucilla was later betrothed to Lucius Verus.

The present intaglio is set in a gold hoop ring dating to circa 1800. The practice of embellishing gems in precious metal was an extremely prevalent feature of the archaeological revival style of the early nineteenth century. Concurrent with a boom in archaeological excavations of ancient Etrsucan and Roman sites, ancient gems and cameos were set in rings or mounts remiscient of ancient gold jewellery and sold to Grand Tourists. The potent combination of beauty and portability made intaglios highly desirable decorative pieces both in antiquity and for antiquarian collectors of the nineteenth century onwards.