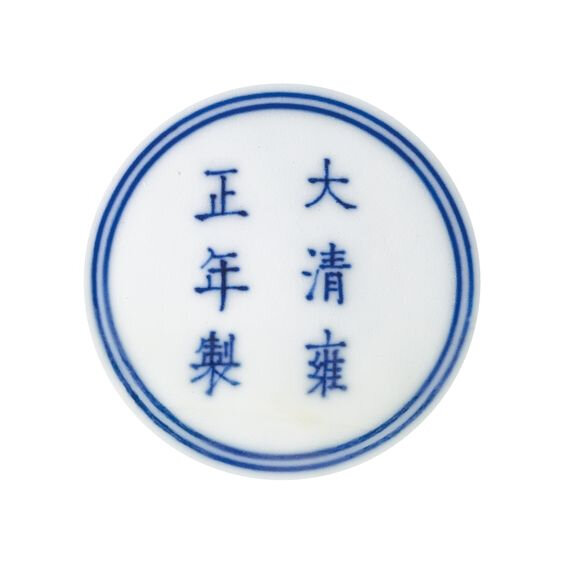 the rounded sides rising from a tapered foot to an everted rim, decorated in the centre with a phoenix and writhing dragon in mutual pursuit of a 'flaming pearl' amid multi-coloured cloud scrolls, the cavetto with a leafy lotus scroll, each flower with a shou character medallion, the everted lipped rim with a band of clouds, the underside with jagged rocks sprouting lingzhi fungus emerging from crested waves below soaring bats, the base inscribed with a six-character reign mark within a double circle.

Note: Visually commanding for the dense design of a dragon and phoenix amongst clouds covering a large form, the present charger is a magnificent example of the technical proficiency of craftsmen employed at the Imperial kilns in Jingdezhen. The creative ingenuity of the Yongzheng potter is evident in the perfectly positioned and spaced elements of the design so that, despite its dense composition, attention is cleverly drawn to the central dragon and phoenix.

A closely related charger in the Palace Museum, Beijing, is published in The Complete Collection of Treasures of the Palace Museum. Porcelains in Polychrome and Contrasting Colours, Hong Kong, 1999, pl. 217; another from the Yokogawa collection is included in the Illustrated Catalogue of Tokyo National Museum. Chinese Ceramics II, Tokyo, 1990, pl. 639; and another was included in the exhibition Chugoku toji ten, Seikado Bunko Art Museum, Tokyo, 1992, cat. no. 50. Another sumptuous dish of this type sold in our London rooms 11th May 2011, lot 220. Further examples include a charger sold in these rooms 10th July 1979, lot 170 and another sold at Christie's Hong Kong, 3rd May 1994, lot 702.