A pair of large Dutch-Delft earthenware obelisks or pyramids, late 17th century, circa 1695-1700

A pair of large Dutch-Delft earthenware obelisks or pyramids, late 17th century, circa 1695-1700 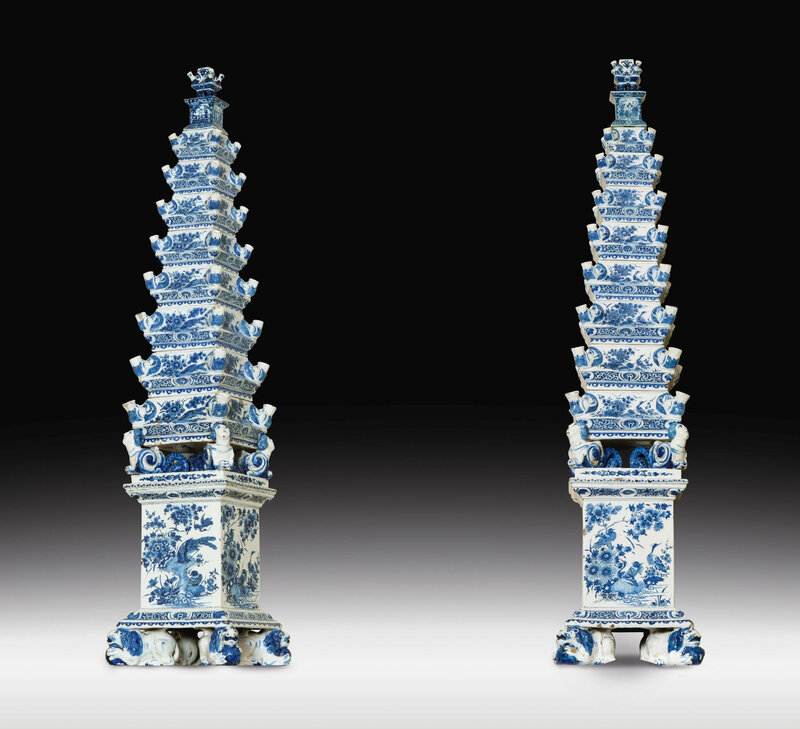 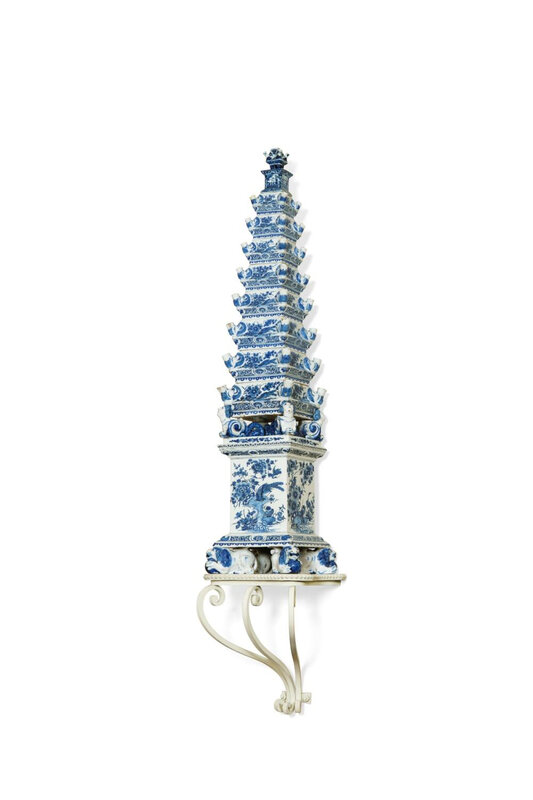 the blue and white decoration with birds, rocks and flowers in the Chinese style, the pyramidal tower of nine pieces above two volute scrolled sphynx, above a pedestal supported by four recumbent lion and ball feet, the upper piece of the tower is an 18th century Chinese porcelain replacement; (the tops and a corner of one base with restorations).

During the late 17th century, Delft earthenware craftsmen created and perfected the making of large vases to hold cut flowers for the court of William III of Orange-Nassau (then known as William III of England) and his wife Mary II and their aristocratic entourage in Holland and Britain.

This vase shape was called pyramid or obelisk. An inventory made in 1691 in the De Metaale Pot factory in Delft, cites the presence of "pyramids for flowers". In the 19th century, these vases were mistakenly named" tulip pots". They were not meant to present a single variety of flower, but instead a profusion of different floral species. Contemporary representations of these pyramids are exceedingly rare. A pyramid is depicted and painted on a pair of Delftware vases from the Moor’s Head factory under the direction of Jacob Wemmersz Hoppoesteyn (1659-1682) and is today housed in the Musée de la Chartreuse in Douai. Delft earthenware pyramids are also presented on the tapestry upholstery of two chairs, circa 1700, in the Doddington Hall collection in Lincolnshire and they appear filled with several varieties of colourful flowers and foliage.

Her interest in both Chinese porcelain and flowers naturally led the Queen to appreciate these Delfts Porceleyn pyramids. An inventory at the palace of Het Loo before 1689 lists the presence of "small pyramids for flowers". Another inventory in her residence at Honselaarsdijk near The Hague mentions "two large pyramids of Delft porcelain to place flowers and four small pyramids".

Three pairs of Delft earthenware tubular vases for flowers in the English Royal Collection at Hampton Court Palace were part of William and Mary’s collection. They are decorated with the Royal couple’s initials, coat of arms and heraldic emblems as King and Queen of England, Scotland and Ireland and portraits of King William III. These six vases come from the manufactory of A Grec (De Grieksche A) under the direction of Adriaen Kocks (1687-1701). Amongst them is a pair of hexagonal pyramids with the spouts accommodating the flowers designed as chimera-like heads, identical to those on our pyramid vases.

The design and shape of this vase incorporates three distinct sources of inspiration.

Firstly, the vase with several spouts or tubes appears to have originated from Persian ceramics of the 12th century, repeated with Medici porcelain in Florence at the end of the 16th century and then in Nevers, France and England during 1650s-1660s.

The obelisk, directly inspired by the Antique, is a symbol of power. During William III’s reign, it was widely used to illustrate Royal authority. For example, the central axis of Het Loo Palace gardens led to a wooden obelisk and triumphal arch. Erected in 1692 at The Hague during William III’s visit, it was framed by obelisks surmounted by busts of King William and Queen Mary.

Finally, the third source of inspiration for these pyramids is the famous Nanjing Porcelain Pagoda (fig. 1). The diffusion of this exotic edifice via its engraving published in Amsterdam in 1665 within Johan Nieuhof’s travelogue (An Embassy from the Netherlands East India Company to the Great Tartar Cham, the current Emperor of China) fascinated Europe and especially the Delft earthenware makers. The similarities between the Nanjing Pagoda and the Delftware pyramids are too numerous to be chance: pyramid spouts imitate the projections along the pagoda’s corners; the tower had nine storeys like most of the Delft pyramids; lastly, it was entirely made of porcelain. Several Delft earthenware pyramids, mainly from De Grieksche A and the De Metaale Pot factories are now part of public and private collections. The largest known example, measuring 178 cm (5 ft. 8 in.), is on display at the Louvre Museum (fig. 2). A pyramid of the same shape as ours, also decorated with stylised Chinese birds and surmounted by a bust of Queen Mary II is kept at the castle in Mnichovo Hradiste, in the Central Bohemian region, Czech Republic. Another pair with identical shaping is housed at the Victoria and Albert Museum in London (160 cm [5 ft. 3 in.]), with the provenance of the collection of Major-General Sir George Burns, descendant of Hans William Bentinck, 1st Earl of Portland (1649-1709), a close friend of William III of Orange. A pyramid of the same form, also surmounted by the bust of Queen Mary II, is housed at the Rijksmuseum in Amsterdam (156 cm [5 ft. 1 in.]), (fig. 3). Finally, a pair (160 cm [5 ft. 3 in.]) was auctioned at Christie's in 1991 (Christie's, Amsterdam, 3 December 1991, lot 231). 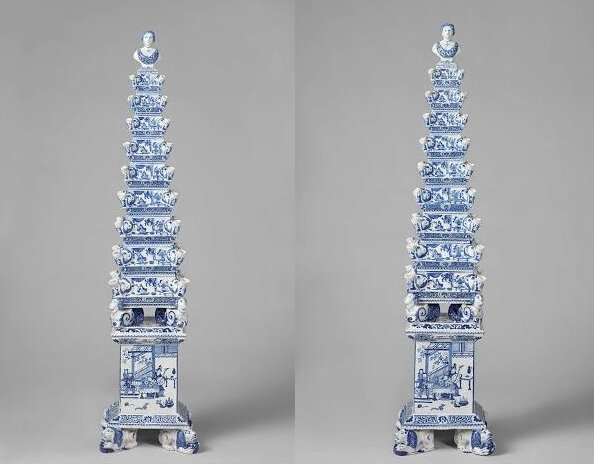 It is thus possible to assume that our pyramids were initially also surmounted by a bust of Queen Mary, which at one point were replaced by two small 18th century Chinese porcelain pyramids imitating, on their part, Delft earthenware.

The du Puget family has its roots in the late 9th century and the large volume of armorial bearings compiled by Charles René d'Hozier (1640-1732), indicates several eminent members including, Claude du Puget, Squire during the 15th century. His grandson, Lord des Brulais was appointed Archer des Ordonnances du Roi and includes amongst his descendants many officers for the House of the King, and the initiation of more than twenty Order of Malta Knights in 1506, with Béranguier du Puget nominated in Rhodes. Other renowned Order of Malta members were Boniface du Puget, the Grand Commander of the Order, Captain of the Papal war galley at the Battle of Lepanto in 1571, and Antoine du Puget, the Grand Master of the Artillery, and Protector of the Capital war galley of the Order. The Order of St. Louis was a Royal and honorary military order created in 1693 by Louis XIV and bestowed on several members of the du Puget family including Étienne du Puget as Artillery Commander, his nephew Edme Antoine as Major General, and Edme’s son Auguste as Captain of the Infantry. The du Puget were always very close to the monarchy. Fervent Royalists, during the French Revolution two of Edme Antoine’s sons were part of the Armée des Princes.