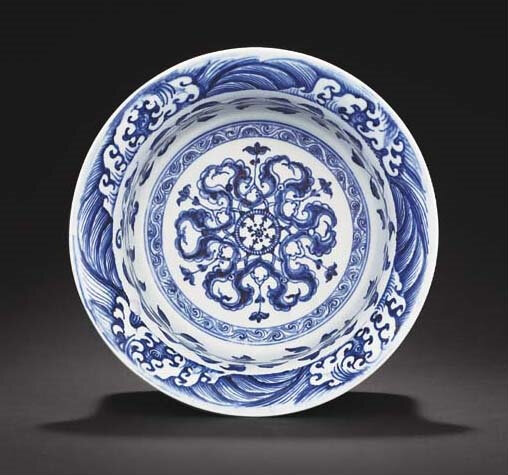 Well potted with deep, slightly inturned sides rising to a flared rim, finely painted in brilliant cobalt-blue with extensive 'heaping and piling', on the flat base of the interior with a central floret enclosed within a roundel from which radiates six ruyi-shaped petals divided by foliate sprigs, all within a classic-scroll border, the steep well encircled by a composite floral scroll bearing six blossoms, including lotus, gardenia, chrysanthemum, camellia, peony and hibiscus, the undulating stem grown with leaves corresponding to each flower, all below a band of crashing waves at the rim, the exterior with a similar floral scroll with eight blossoms, all within double-line borders and below detached floral sprays, the unglazed base revealing the smooth white ware with a light speckling of orange, box.

This rare and beautiful Yongle basin is a particularly successful melding of Chinese design with a form taken from the Islamic West. The distinctive form of the basin has its origins in the Near East, where it was produced both in metal and in glass. A 14th century Syrian enamelled glass example (d: 29.2 cm.) in the collection of the Metropolitan Museum, New York, is illustrated by John A. Pope, Chinese Porcelains from the Ardebil Shrine, Philip Wilson, London, 1981, plate 135, B. Compare also a Syrian/Egyptian brass basin with silver inlay dated to the 14th century in the Metropolitan Museum of Art, illustrated by Feng Xianming, 'Yongle and Xuande Blue-and-White Porcelain in the Palace Museum', Chinese Ceramics Selected articles from Orientations 1982-1998, Hong Kong, 1999, p. 177, fig. 10 (see fig. 1); where it is illustrated together with a Yongle blue and white basin in the Palace Museum. A further inlaid silver metalwork example dated to 13th-14th century Egyptian Mamluk period is now in the collection of the Los Angeles County Museum of Art, and was exhibited at the Hayward Gallery and published in The Arts of Islam, Arts Council of Great Britain, London, 1976, p. 189, no. 213. The authors of this exhibition catalogue point out that these basins follow a form that was already known in Syria and Egypt in Ayyubid times (AD 1238-40) and refer to one in the same volume, cf. ibid., p. 181, no. 198. This earlier version, however, lacks the very slightly waisted, straight sides and the sharp angle to a flattened rim that is characteristic of the later form that inspired the Chinese porcelain basins. A further example in the collection of Nasser Sabah al-Ahmad al-Sabah is illustrated in Islamic Art in the Kuwait National Museum, The al-Sabah Collection, Marilyn Jenkins (ed.), London, 1983, p. 94.

Despite the fact that both the Syrian glass example and the Mamluk brass example, mentioned above, both bear decoration in which Arabic calligraphy plays a major role, the Chinese blue and white porcelain versions of this form adopt a very different decorative style. Although the arabesques on the interior base of some of the porcelain basins, and the pinks on the rim of others, have Near Eastern origins, the rest of the decoration appears purely Chinese. The inclusion of such basins in the Chinese imperial collections, and the fact that none appear in the Ardebil collection, and only one in the collection of the Topkapi Saray in Istanbul, illustrated by J. Ayers & R. Krahl, Chinese Ceramics in the Topkapi Saray Museum Istanbul, vol. II, Philip Wilson, London, 1986, 516, no. 611, and colour plate on p. 421, suggests that these vessels, despite their foreign form, were in fact intended for elite patrons in China and not as export wares.

In the Yongle reign the porcelain vessels of this form were made in a variety of sizes from those with a mouth diameter of 16.5 cm., to those with a mouth diameter of 31.6 cm. The current basin with a mouth diameter of 26.3 cm. can be regarded a middle-sized. The majority of these blue and white basins, including the current example, have a band of turbulent waves around the rim. This distinctive wave band is characteristic of fine imperial wares of the Yongle reign. It appears that only the very large Yongle basins bear a different decorative band on the rim. A basin of 30.9 cm. diameter in the collection of the Nanjing Museum, illustrated in Zhongguo Nanjing Bowuyuan suocang, TBS, Tokyo, 1998, p. 34, no. 6; and an even larger one with a diameter of 31.6 cm. in the collection of the Palace Museum, Beijing, illustrated in The Complete collection of Treasures of the Palace Museum - 34 - Blue and White Porcelain with Underglaze Red (I), Commercial Press, Hong Kong, 2000, p. 52, no. 49. Both these examples have an elaborate scroll of carnations or pinks around the rim. The two larger basins also have a different design on the interior base. They both have a ring of lotus petals containing emblems within a circle of keyfrets, while the medium and small sized basin have elaborate scrolling arabesques within a circle of formal wave patterns.

A much smaller basin with the same decoration as the current example is in the collection of the Palace Museum, Beijing, illustrated The Complete collection of Treasures of the Palace Museum - 34 - Blue and White Porcelain with Underglaze Red (I), op. cit., p. 53, no. 50. A similar basin of the same design and approximately the same size is in the collection of the National Palace Museum, Taipei, illustrated in Ming dai chunian ciqi tezhen mulu, National Palace Museum, Taipei, 1982, p. 110, no. 45 (fig. 2). A further example of this size is published by R. Fujioka and G. Hasebe, Sekai toji zenshu - 14 Ming, Shogakukan, Tokyo, 1976, p. 166, no. 151. An example from the Brundage Collection was exhibited in Blue and White - Chinese Porcelain and its Impact on the Western World, University of Chicago, 1985, no. 28.

The form appears to have survived, perhaps only briefly into the Xuande reign, and an example bearing a Xuande reign mark is published in Chinese Ceramics from the Museum Yamato Bunkakan, illustrated catalogue Series no. 7, Nara, 1977, no. 134. However the decoration on the Xuande vessel is different. The combination of graceful Yongle decoration on this simple, but elegant, Near Eastern form, as seen on the current example produces a particularly attractive vessel.