Attired in a tall cylindrical crown and princely raiment, holding his right hand in abhaya mudra while his left lies in his lap, supported on an open lotus flower with vertical stamens in raised relief visible in the spaces between the upper lotus petals; the surfaces all displaying traces of gilt.

Note: For a similar crown and lotus plinth, see the Liao gilt bronze figure of Vairocana in the Metropolitan Museum of New York, as published in Denise Leidy, Wisdom Embodied: Chinese Buddhist and Daoist Sculpture in The Metropolitan Museum of Art (New Haven, Yale University Press, 2010), p.123, cat. no.26. Leidy there suggests the intriguing possibility that the Metropolitan Museum Vairocana was but one element of a three dimensional Vajradhatu mandala. The aperture on the back of the present lot, though possibly just a casting flaw, could suggest that the current figure might also have been merely one element of a larger assembly, either one of two Bodhisattvas in a triad, or a more unusual esoteric mandala like Leidy suggests, as hinted at by the cylindrical headgear. 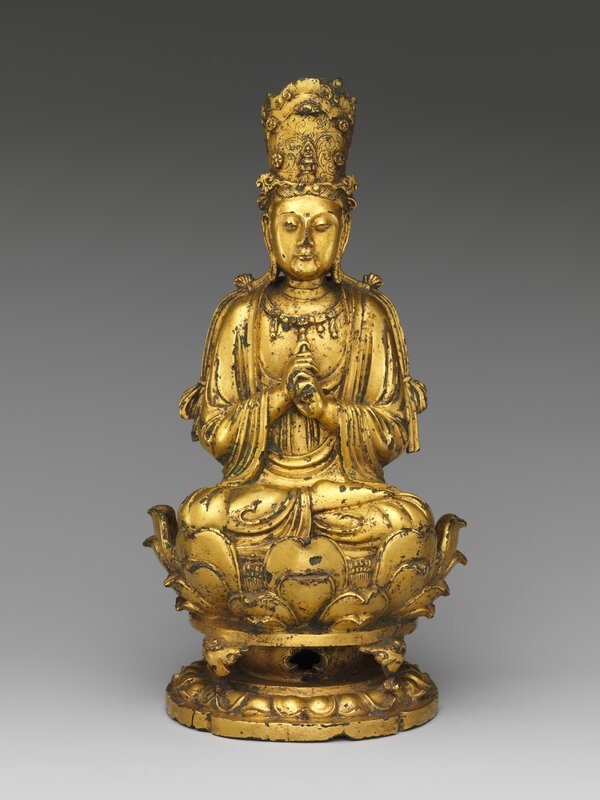 For a similar cylindrical crown with ribbons trailing to the shoulders and more complete lotus base, see the Liao gilt bronze figure of Vairocana sold in Christie's New York sale 11928, 17-19 March 2016, lot 1408. 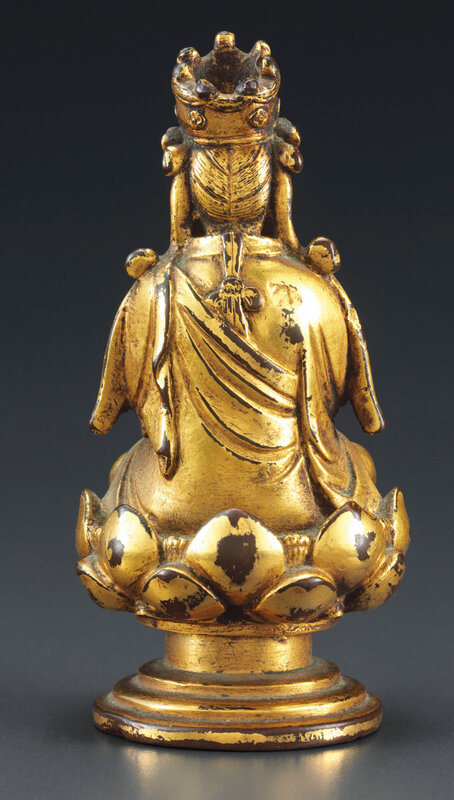 The figure is seated in dhyanasana on a lotus-base raised on a waisted circular pedestal with the hands held before the chest in vajramudra. He wears heavy, voluminous robes and the face is surmounted by a tall crown.

Note: The present figure belongs to a corpus of small gilt-bronze figures of Buddhas and bodhisattvas with integral lotus bases, all dated to the Liao dynasty. Compare, for example, with a slightly larger example in the National Museum, Amsterdam, with a similarly treated crown, illustrated in Comprehensive Illustrated Catalogue of Chinese Buddhist Sculptures in Overseas Collections, vol. 7, Beijing, 2005, p. 1299, as well as a small bodhisattva sold at Christie's New York in The Sublime and the Beautiful: Asian Masterpieces of Devotion, 20 March 2014, lot 1609. The present figure, however, is most closely related to a larger example at the Metropolitan Museum of Art, illustrated by Denise Leidy in Wisdom Embodied: Chinese Buddhist and Daoist Sculpture in The Metropolitan Museum of Art, p. 123, cat. no. 26. Leidy notes that such images of Vairochana likely formed the central figure of a Vajradhatu mandala (Diamond Realm), a tantric aspect of Buddhism developed in India in the preceding centuries. She also notes that the distinctive, tall crown with lotus embellishments, followed those worn by the Liao rulers.