A rare early Ming blue and white lianzi bowl, Xuande six-character mark within double-circles and of the period (1426-1435)

A rare early Ming blue and white lianzi bowl, Xuande six-character mark within double-circles and of the period (1426-1435) 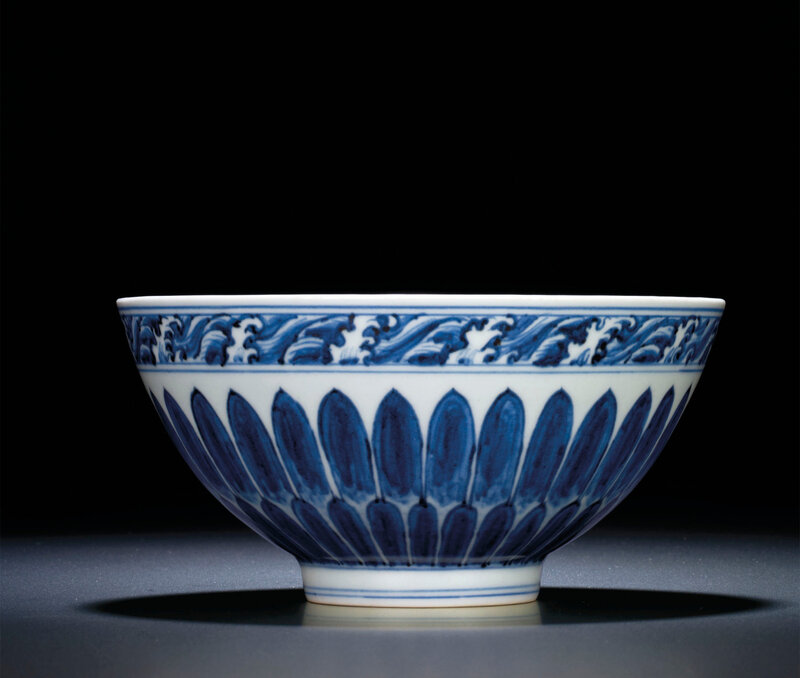 Finely potted with deep rounded sides rising straight to the rim, the centre of the interior is painted with a fruiting and flowering pomegranate spray within a double-circle medallion, surrounded by a lotus scroll on the cavetto below a keyfret band. The exterior features two registers of lotus petals below a crested wave border, supported on a slightly tapered foot ring edged with a double line.

Note: Lianzi wan, or lotus bowls, with gently curved sides and straight rims, decorated on the exterior with a single band or double bands of long underglaze-blue petals were popular with the court in the Xuande reign. The decoration on these bowls is particularly interesting for the contrast between delicately painted floral scrolls on the interior and the boldly painted petals on the exterior.

A number of these bowls designed with two bands of lotus petals on the exterior are published, including an example recovered from shards found at the Zhushan Imperial kilns, illustrated in Xuande Imperial Porcelain excavated at Jingdezhen, Taipei, 1998, fig. 107. Another example from the Dr Stephen Wootton Bushell bequest in the British Museum is illustrated by J. Harrison-Hall, Ming Ceramics, London, 2000, p. 134, fig. 4:27, where the author mentions the use of pomegranate as symbolic fertility because of its many seeds and the lotus for its Buddhist associations. Compare also four other similar bowls, the first in the Palace Museum, illustrated in Blue and White Porcelain with Underglaze Red (I), The Complete Collection of Treasures of the Palace Museum, Hong Kong, 2000, pp. 162-163, no. 154; the second in the National Palace Museum, illustrated in Catalogue of the Special Exhibition of Selected Hsuan-te Imperial Porcelains of the Ming Dynasty, Taipei, 1998, no.154; and two were included in An Exhibition of Blue-Decorated Porcelain of the Ming Dynasty, Philadelphia Museum of Art, 1949, pl. 55, from the Roy Leventritt Collection, and pl. 56 from the Richard B. Hobart Collection.

Bowls like the current example are fashioned after the Yongle prototypes which have comparatively more slender petals including one in the Palace Museum, illustrated in Blue and White Porcelain with Underglaze Red (I), op. cit., no. 75. That example featuring instead a single row of bold petals on the exterior, is decorated with a loquat sprig on the interior surrounded by a frieze of alternating flowers. A very similar example from the collections of Wu Lai-hsi, George Eumorfopoulos and Enid and Brodie Lodge, and exhibited in the Oriental Ceramic Society, Exhibition of Ming Blue and White Porcelain, 1953, Catalogue, no. 16, was sold at Christie's Hong Kong, 28 November 2005, lot 1412.

Christie's. IN PURSUIT OF REFINEMENT - A LEGACY OF THE YC CHEN COLLECTION. 29 May 2013. Convention Hall.

Commentaires sur A rare early Ming blue and white lianzi bowl, Xuande six-character mark within double-circles and of the period (1426-1435)