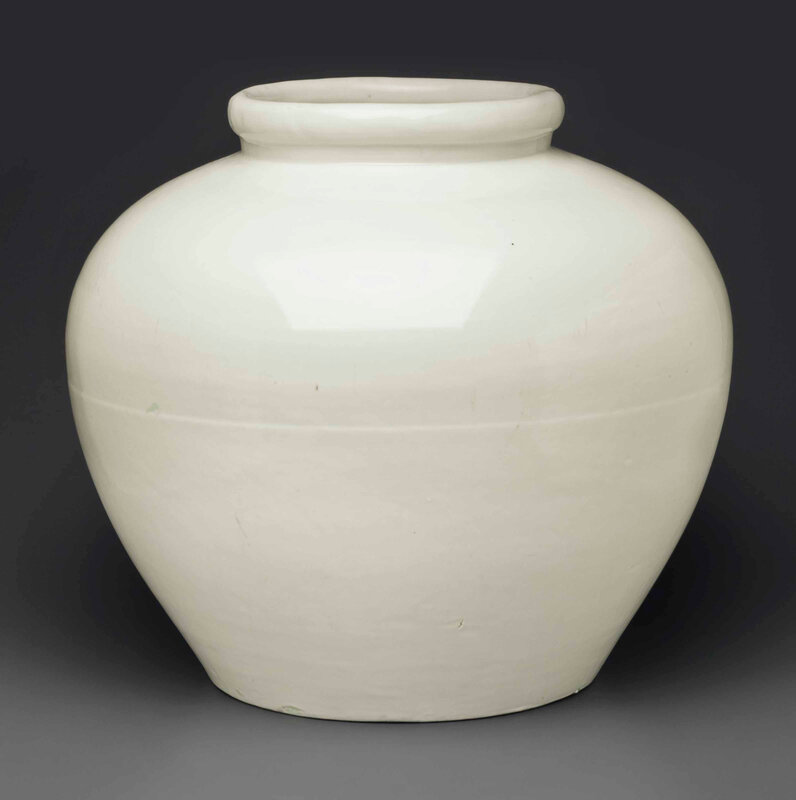 The jar is heavily potted, with a tapering globular body, short neck and thick, lipped rim, and is covered inside and out with a slightly blue-tinged white glaze. It is raised on a flat foot ring, and the unglazed base shows the white porcelaneous ware.

Literature: Chinese Ceramics in the Idemitsu Collection, Tokyo, 1987, no. 614.

Note: This jar is a particularly fine and rare example of the so-called tianbai 'sweet white' glaze applied to a large vessel. The slightly matte, silky tianbai glaze was developed in the Yongle reign (1403-24) in response to the emperor's preference for white porcelains, and his desire to have fine white wares both for use in the Palace and for ceremonial purposes. Excavations at the site of the Imperial kilns have shown that by far the greatest proportion of imperial porcelains made during the Yongle reign were white. Even in the Xuande reign (1426-35), when imperial production was dominated by underglaze blue-decorated wares, fine tianbai white wares were highly prized by the court. Few surviving white vessels from either reign period, however, match the large size of the current jar.

A slightly smaller white jar (44.9 cm. high) of similar shape to the current example was excavated from the Xuande strata of the Imperial kilns at Jingdezhen in 1983, and is illustrated in Imperial Porcelain of the Yongle and Xuande Periods Excavated from the Site of the Ming Imperial Factory at Jingdezhen, Hong Kong, 1989, pp. 212-3, no. 65. A similarly sized blue and white excavated jar is illustrated pp. 268-9, no. 93, in the same volume. Like the current example, the excavated white jar bears no mark. The excavated jars have the same globular form with wide, rounded shoulders, as the current example. The mouth form of these two vessels, however, differ. The excavated jars have a straight mouth to fit the flanged lids that were found with them. The current jar has a protruding rounded lip on the outer edge of its mouth. It may be that this jar was intended as a storage jar for, perhaps, fine wine, and would have needed a closely-fitting stopper, which could have been securely tied in place with cloth and a cord fastened under the lip.

A somewhat smaller wine jar (33.5 cm. high) with turquoise glaze in the Percival David Foundation, London, is of similar shape to the current jar. This jar is published by R. Scott in Imperial Taste - Chinese Ceramics from the Percival David Foundation, San Francisco, 1989, p. 66, no. 36, and front cover illustration. The David Foundation jar has the same projecting lip as the current jar, which in the former case is covered with a gilded copper band. The David Foundation jar was previously in the Imperial Palace Collection, Beijing, and bears on its shoulder in relief the characters Neifu gong yong (for use in the palace). The current white jar has finer body material than the turquoise jar. A well-refined body was essential to show a tianbai glaze to best advantage.

A projecting lip can also be seen on a tianbai-glazed meiping wine vessel excavated in 1983 from the early Yongle stratum of the Imperial kilns at Jingdezhen and published in Imperial Porcelain of the Yongle and Xuande Periods Excavated from the Site of the Ming Imperial Factory at Jingdezhen, op. cit., pp. 112-3, no. 15. This meiping, shares with the current jar its widely rounded shoulders. A pair of white meiping of similar form, bearing on their shoulders the characters neifu in underglaze blue, from the Ataka Collection, are illustrated in Sekai toji zenshu, vol. 14, Ming, Tokyo, vol. 14, 1976, p. 176, no. 180.