Netherlandish school, circa 1615-1625, Still life of an illuminated manuscript

Netherlandish school, circa 1615-1625, Still life of an illuminated manuscript 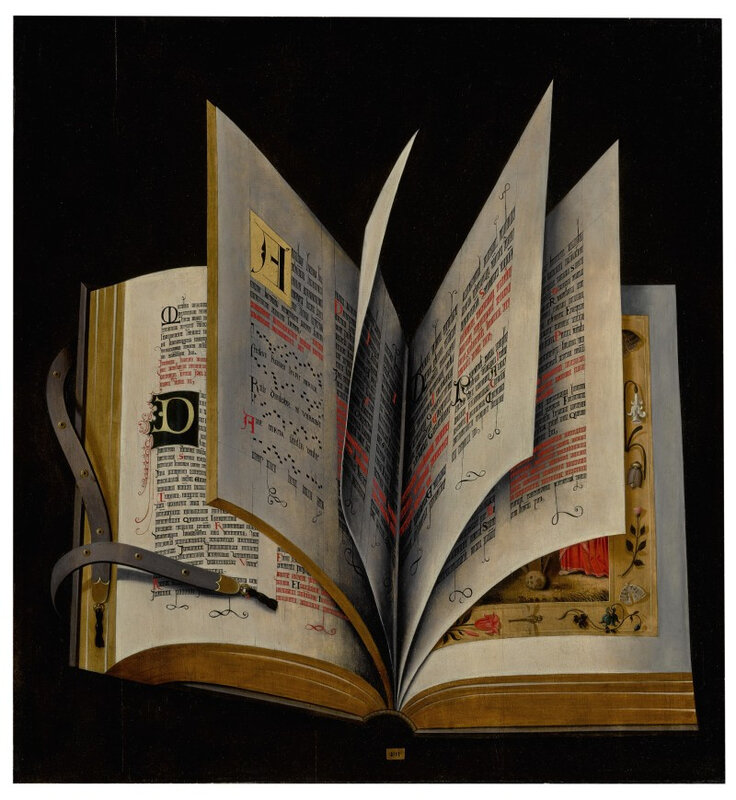 Note: Against a stark black background, a monumentally scaled illuminated manuscript is the sole subject matter of this fascinating panel painting. The manuscript is staged in a captured moment in which its pages open to reveal its richly ornamented text and illumination. Rather than serve as descriptive or ornamental iconography in a larger narrative, it alone is the subject of the picture, a simultaneous practice in religious devotion and careful artistic description. Ornate and gilded fictive Latin, a score of music, and an illumination take up the entirety of the picture plane. Although partly obscured, a skull and a foot emerging from a red cloak readily identify the illumination as the Crucifixion of Christ with John the Evangelist standing beside the cross. The margin around it is decorated with gold leaf upon which exquisite strewn flowers and insects cast their shadows, some of which refer specifically to the crucifixion, notably the columbine, symbolizing the Holy Spirit and the Passion, whereas the daisy is associated with the Virgin Mary, and the butterfly, an emblem of the redemption of the soul.1 The book is thus a liturgical manuscript, most probably a missal, and executed in the wake of the great manuscript illuminations produced in Ghent and Bruges from the 14th to 16th centuries.

The simplicity and symmetry with which this painting is rendered speaks to a contemporary audience, though the tradition for missal paintings was born to serve an erudite commercial audience well versed in the collection and production of illuminated manuscripts. These missal paintings can roughly be divided into two main categories. The present example forms part of the first, which is known in only three extant versions—one in the Galleria degli Uffizi and a second in The Frances Lehman Loeb Art Center at Vassar College. All three versions are executed on oak panels, though the present example is the largest in size. The second type is known in roughly fifteen versions, typified by an example in the Museumslandschaft Hessen, Kassel (fig. 1) which features a denser, text filled composition, but without the highly detailed illumination detail found in the present type.2 The Uffizi and Vassar versions of the present composition have at various times in their history been attributed to either the German painter Ludger tom Ring the Elder (1496-1547), or his son, Ludger tom Ring the Younger (1522-1584), owing to a small detail in the beginning of the fictive text supposedly reading ‘Ludevi Rinki’. The attributions to both Ring generations have, however, rightly met with scholarly skepticism.3 Neither painter in fact are known to have signed in this manner; moreover, the Latin translation of ‘Ring’ is ‘circulum’, not ‘Rinki’. Rather, the heretofore anonymous painter of these works should – in line with the book’s Flemish origin – be placed more accurately in the Southern Netherlands.

The highly detailed illumination at lower right lends to a further identification of the origin as that of Southern Netherlandish and the Ghent-Bruges School. The coloring, decorative scheme, and flower filled ornamentation all bear striking similarity with the work of those illuminated manuscript specialists working in Ghent and Bruges in the 15th and 16th centuries. Among the best known of these illuminators are masters such as Lieven van Lathem (1430-1493), Gerard Horenbout (c. 1465-1540/41) Alexander Bening (d. 1518/19), his son Simon Bening (1483/84-1561) and the latter’s daughter Levina Teerlinc (c. 1515-1576). In fact, the illuminations seen in the present manuscript show clear inspiration from the work of Simon Bening. A manuscript illuminated by him, containing a similar crucifixion with comparable floral motifs and insects in its margin, is kept at the Pierpont Morgan Library, New York (fig. 2). 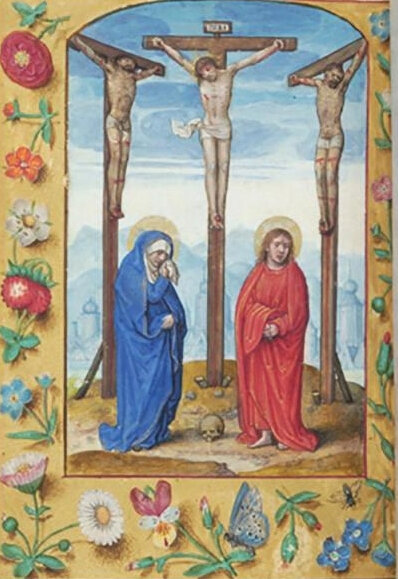