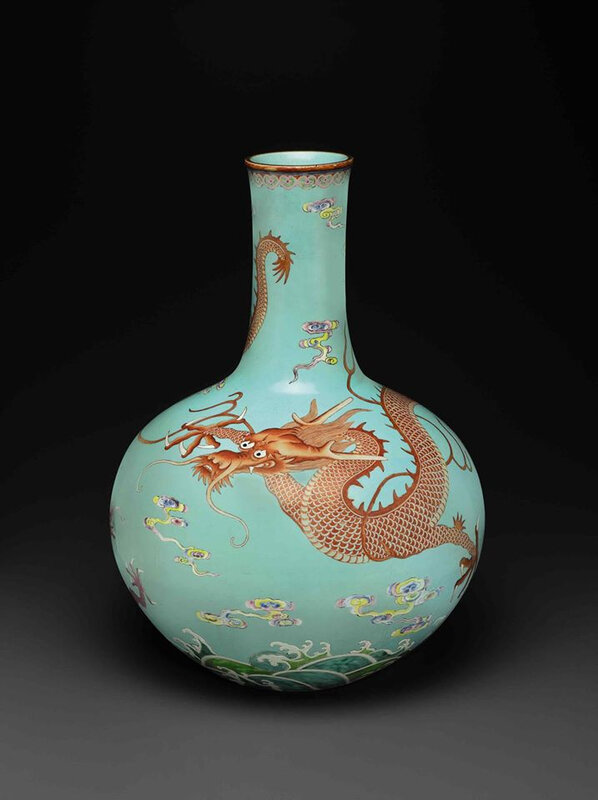 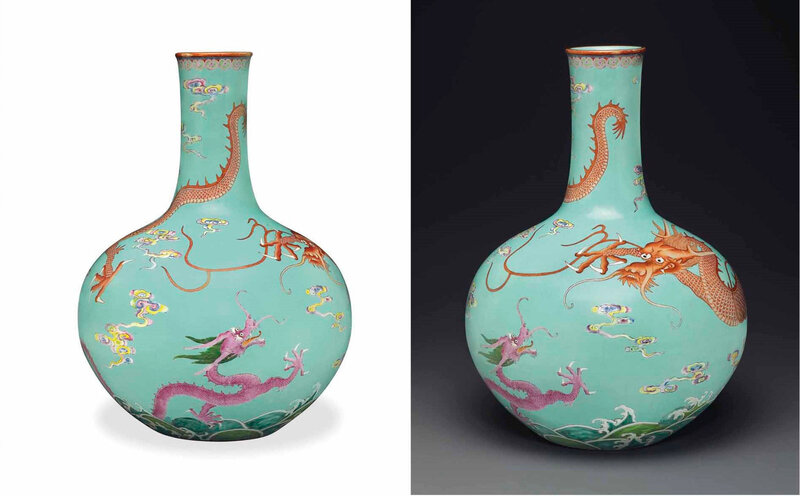 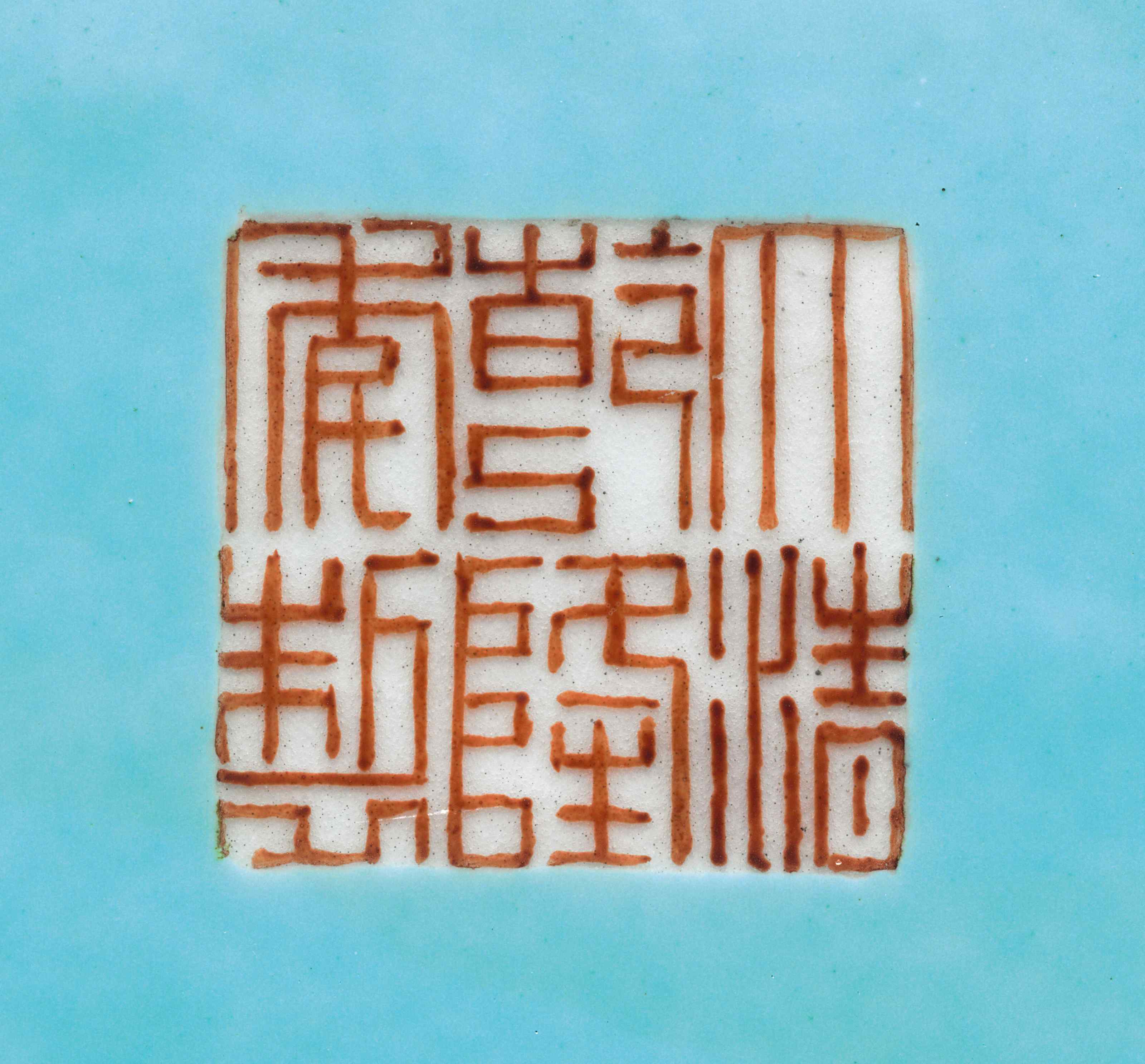 The bulbous body and neck are decorated with a large five-clawed, scaly, iron-red dragon with long tail that continues up onto the neck shown amidst multi-colored clouds as it confronts a smaller pink dragon shown rising from a band of cresting waves at the foot, all against a ground of rich turquoise color below a pink and green ruyi border and an iron-red rim. The interior of the neck is also covered in turquoise enamel, as is the base around the seal mark.

Provenance: George H. Taber (1859-1940) Collection, and thence by descent within the family.

Note: George Hathaway Taber Jr. (1859-1940) was a prolific collector of Chinese ceramics and jades with a discerning eye for quality and an unusually good understanding of what might appeal to Chinese taste. The son of Capt. George H. Taber (1808-1901), who rose from a humble background to become a prominent member of the community filling a number of important offices including serving as President of Fairhaven Bank, Taber Jr. made his mark as an oil executive and ultimately board member with the Gulf Oil Company. A self-taught engineer, he was instrumental in developing important advances in the oil refining technique. Believed to have been influenced by a relative who had brought back tales and beautiful objects from his travels in China, George Hathaway Taber Jr. built up an extraordinary collection which was loaned or gifted to a number of museums, including the Philbrook Museum to form the core of the Chinese collection. An extremely rare doucai tianqiuping gifted by the Tabers remains the outstanding work from the Museum's Chinese collection. Upon his death in 1940, the collection was split up between his descendants and part of it was sold at the Park Bernet Galleries, 7-8 March 1946.

The succession of power from Emperor to Prince, from father to son, is well-represented in Qing dynasty works of art and paintings, which indicates the importance vested in the passing of knowledge from father to son and in anticipating the transfer of the mandate of heaven. The theme is most famously represented in a painting by Giuseppe Castiglione (Lang Shining) In the Palace Museum Collection, Beijing, of the Yongzheng Emperor with Prince Hongli (the future Qianlong Emperor) known as Spring's Peaceful Message. The young Prince is shown smaller than the Emperor, bowing slightly, and looking respectfully up at his father as the two men exchange a spray of prunus, while behind and to the side there are bamboo stems.

However, the subject also appears to have represented in more subtle allusions to the theme. A pair of cloisonné enamel double crane censers sold at Christie's Hong Kong, 1 December 2010, for example, are thought to have been commissioned by the Prince Hongli for his father, the Yongzheng Emperor. The cranes are modeled standing next to one another, one larger than the other, the smaller crane looking up at the larger one in respect or admiration, much in the same way as in Castiglione's painting.

In this case it is the two dragons that appear to represent the passing of knowledge from father to son. The use of enamels and sophisticated design suggests that the current vase is likely to have been produced in the second half of the 18th century and it is therefore likely that in this case it represents the Qianlong Emperor passing knowledge to his son, the future Emperor Jiaqing. A number of quite closely related vases are known depicting the same imagery and broadly using the same technique of iron-red to represent the adult dragon and pink enamel to depict the smaller one among multi-colored clouds. Interestingly many of the examples also share similarities in the decorative borders surrounding the foot and neck as well as the iron-red sealmark suggesting that they were all probably made within a fairly short time-span during the Qianlong reign. Compare the present vase with a Qianlong-marked turquoise-ground baluster vase originally sold at Sotheby's New York, 20-21 May 1987, lot 555. An ovoid vase from the Huaihaitang Collection with the dragons depicted against a white background between turquoise ground borders, was exhibited at the Chinese University of Hong Kong, Ethereal Elegance - Porcelain Vases Of The Imperial Qing - The Huaihaitang Collection, November 2007-March 2008 and illustrated in the catalogue, no. 123. The secondary dragon, with its green mane and elongated, almost feline features compares particularly closely to the dragon on the present vase. Another example with dragons against a white ground between turquoise borders from the collection of J. Lester Jervis, was sold at Bonhams Hong Kong, 28 November 2011, lot 457.

Closely related vases also appear to have been made omitting the smaller dragon but incorporating other elements of the design seen on the present vase. A similar wave border can be found on a yellow-ground bottle vase decorated with a single iron-red dragon encircling the body among multi-colored clouds in the National Museum, Taipei illustrated in Catalog of the Special Exhibition of K'ang-H'si, Yung-Cheng and Ch'ien-Lung Porcelain Ware from the Ch'ing dynasty in the National Palace Museum, Taipei, 1986, no. 119.

All the aforementioned vases share thick opaque enamels that seem to be characteristic of the latter half of the Qianlong period but the current vase stands out among the group in the boldness with which the iron-red dragon is depicted, the uncluttered scattering of the clouds and the successful use of the rounded contours of the bulbous body to provide the dragons with a vivid sense of movement.