Arts Minister launches call to save a Medieval guide for hermits

Arts Minister launches call to save a Medieval guide for hermits 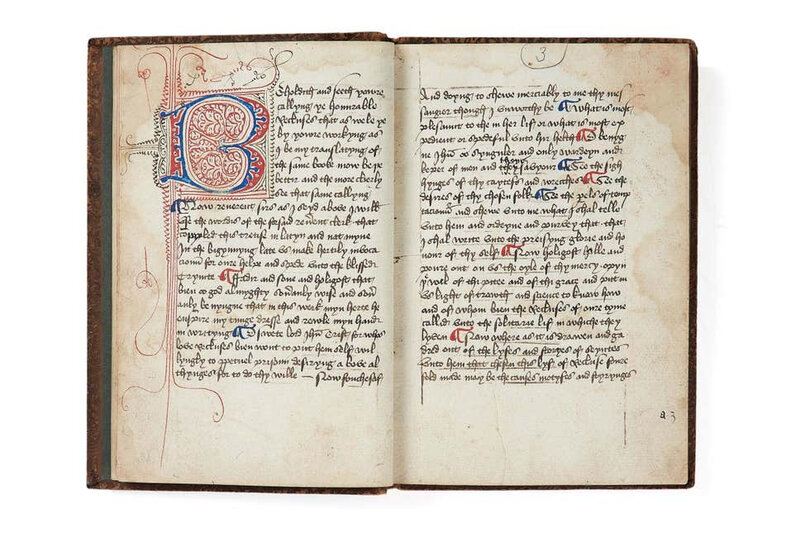 The Myrowr of Recluses, a Middle English translation of the Speculum Inclusorum, a guide to the life of an English anchorite, decorated manuscript on paper [England (probably London region, perhaps Barking Abbey), first half of fifteenth century (probably soon after 1414)]. © Dreweatts

LONDON.- Arts Minister Helen Whately has placed an export bar on a 15th century Middle English decorated manuscript designed to act as a guide for those entering the life of a religious hermit.

‘The Myrowr of Recluses’ is believed to have been written in the early 1400s in London by an unknown scribe and is a translation of the Latin ‘Speculum inclusorum’. It is designed to be a guide for anchorites or hermits who were religious recluses that retreated from society in order to dedicate their lives to prayer and contemplation.

It is estimated that there were around 200 anchorites or hermits in England in the 13th century with more women entering the life than men, however there is little evidence as to how many were living at the time the manuscript was written.

The work details the reasons - both virtuous and in some cases misguided - that people seek to become an anchorite, the activities of an anchorite’s life - principally prayer, meditation and reading - and what can be expected in this world and the next for those who observed the vocation faithfully.

The only other known version of the ‘The Myrowr of Recluses’ is an incomplete manuscript held by the British Library which dates from the mid-15th century. The discovery of the manuscript at risk of export has revealed previously unknown sections of the text and is of huge significance for the study of the lives of medieval women and anchorites.

Arts Minister Helen Whately said: This beautiful decorated manuscript is a precious record of the life of hermits in 15th century England and it would be a sad loss if it was sold abroad.

I hope that a buyer can be found to save this fascinating piece of history for future generations to study and learn from.

The Minister’s decision follows the advice of the Reviewing Committee on the Export of Works of Art and Objects of Cultural Interest (RCEWA). The committee noted that the manuscript was a fascinating example, rich in potential for study and future research. They also noted that the manuscript’s rich provenance shed light on the history of the production of and later collection of medieval works.

Committee Member Leslie Webster said: Unknown to scholarship until recently, this handsomely decorated copy of a guide to the austere life of an anchorite offers a rich new avenue of exploration into the nature of women’s religious education in the early fifteenth century, and how such texts were circulated. Almost certainly written for female anchorites, the text seems to be linked to the Benedictine nuns at Barking Abbey, a foundation dating back to Anglo-Saxon times, and in the fifteenth century, renowned as a house of educated women, inspired by its Abbess, Sybil de Felton.

Amongst other unique content, this particular manuscript also gives a precise date for the beginning of the text’s composition: ‘this Wednysday bi the morrow, the even of the blissed virgyne seynt Alburgh, the secunde yeere of the worthy christen prince oure souerayn liege lord the kyng Henry the Fiftis’ – or Wednesday, 10 October 1414. Such contemporary detail makes the manuscript a vivid witness to the period, as well as of great importance to our understanding of later medieval thought and society. It is a fascinating treasure that deserves to be saved.

The RCEWA made its recommendation on the grounds of the manuscript’s outstanding significance for the study of collecting history, the medieval book trade and the history of anchoritic life in England.

The decision on the export licence application for the manuscript will be deferred until 13 April 2020. This may be extended until 13 August 2020 if a serious intention to raise funds to purchase it is made at the recommended price of £168,750. The Myrowr of Recluses, a Middle English translation of the Speculum Inclusorum, a guide to the life of an English anchorite, decorated manuscript on paper [England (probably London region, perhaps Barking Abbey), first half of fifteenth century (probably soon after 1414)]. © Dreweatts