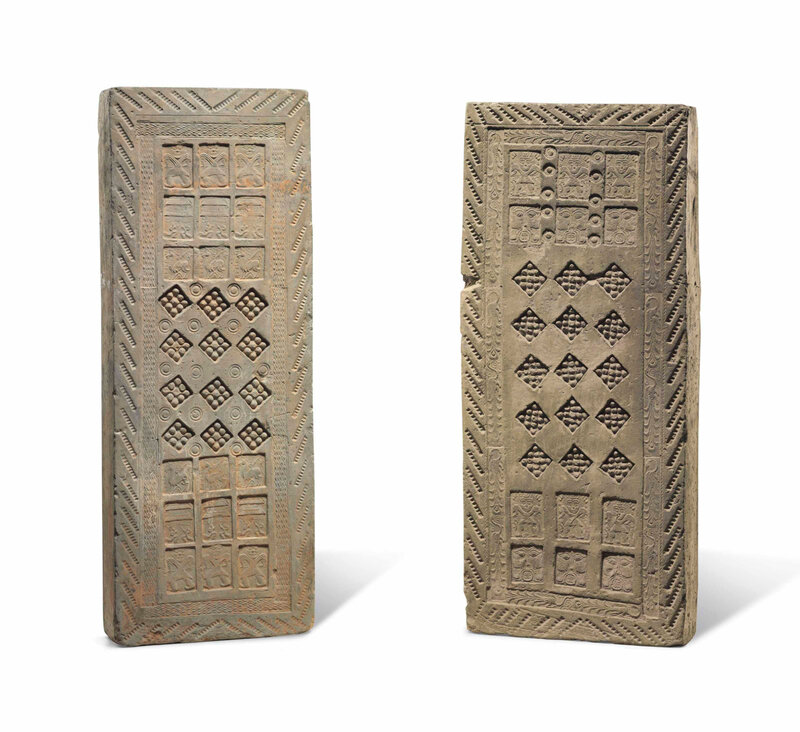 The first is of grey tone and impressed on either side in the center with five parallel rows of lozenge-shaped panels, each containing small raised bosses, set between two rows of rectangular panels, each containing a face or a single human figure, and all enclosed by borders of peacocks in profile, and short, serrated lines. The second is of beige tone and impressed on either side with a similar pattern of panels, but of varying number to the first, and is also impressed with double circles between the lozenge-shaped panels of the central section. The upper and lower panels exhibit imprints of a masked warrior, two horses in front of a building, or an archer on horseback, six of which have inscriptions that possibly read ru shan, chu dong bei, tu zi bai (enter the mountains, exit the northeast region, (caught) one hundred rabbits), and ba qian li' (eight thousand li), and are all enclosed within borders of small chevrons and similar serrated lines, stone stands.

Note: A smaller, square-form tomb brick in the Royal Ontario Museum, Toronto, is impressed with similar panels to those seen on the second brick, but in a different order, and is illustrated in Chinese Art in the Royal Ontario Museum, Toronto, 1972, p. 149, no. 99. It features a row of three archers on horseback, with the same inscriptions found on the present brick, a row of the two archers in front of a building, and a row of the masked warrior, all enclosed by a similar peacock border.