A dark grey limestone figure of Amitabha Buddha, inscribed Jinglong third year (709), and of the period

A dark grey limestone figure of Amitabha Buddha, inscribed Jinglong third year (709), and of the period 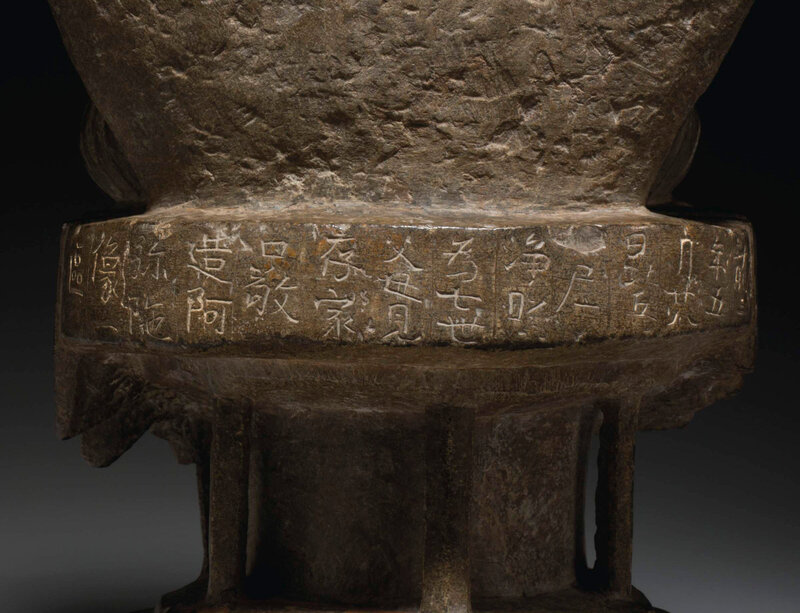 The seated figure is backed by a flame-carved mandorla carved with a foliate scroll aureole that frames the head, and wears a long diaphanous robe which cascades in crisp, overlapping folds over the front of the circular plinth that is raised on a columnar support surrounded by six narrow columns that rise from the lobed, layered base, which is carved on the back with a lengthy dedicatory inscription.

Note: The inscription may be translated, 'On the 28th day of the 5th month of the 3rd year in the Jinglong reign (709), nun Jingzhao respectfully made (this figure of) Amitabha for her parents from seven lifetimes'.

A stylistically similar dark grey limestone figure of Buddha, of larger size, 2 feet 8 inches, is illustrated by O. Sirén in Chinese Sculpture: From the Fifth to the Fourteenth Century, vol. II, 1988 ed., pl. 365, where it is ascribed to Shaanxi province, and dated to the Tang dynasty. As with the present figure, it also has a dated inscription, that corresponds to 639. Two other stylistically similar figures dated to the Tang dynasty, also of larger size (31 and 35¾ in. high), from Ruicheng county, Shanxi province, and now in the Ruicheng County Museum, are illustrated by R.L. Thorpe in Son of Heaven: Imperial Arts of China, Seattle, 1988, pp. 108-9, nos. 45 and 46. No. 45 is dated to the Chang'an reign (701-705) and no. 46 to the Jinglong reign (707-710).

All of these figures are shown seated in the same position, with their hands in the same mudras, and their robes are similarly carved to drape in crisp folds around the body and over the edge of the plinth.