LONDON.- Pax Romana, a British gallery and auction house known for its expertly vetted antiquities and discerning international clientele, will conduct a Saturday, February 1 no-reserve auction of antiquities, and ancient jewellery, weaponry and coins. The carefully curated selection allows all collectors, whether novice or advanced, to bid on beautiful, authentic ancient objects backed by trusted provenance and scholarship. Each lot will convey to its new owner with a professional Certificate of Authenticity signed by Pax Romana’s owner/director, Dr Ivan Bonchev (PhD, University of Oxford).

The auction catalogue is divided into five main categories of interest: Ancient Jewellery, Classical Antiquities, Ancient Weaponry, Asian Antiquities and Ancient Coins. Within the stellar lineup chosen for this sale are: a superb collection of ancient wearable jewellery in gold, silver and bronze; many exceptional ancient weapons, including swords, spears, axes and helmets; classical antiquities in marble, glass and terracotta; and a collection of Ancient Chinese and Gandhara figurines of peerless quality.

A large (23 x 10.92in) and quite remarkable Gandhara carved panel of grey schist stone is a detailed representation of Buddha life, with The Buddha seated on a center pedestal, flanked by adoring attendant figures. Dating to circa 200-300 A.D., this wonderfully detailed artwork is in fine condition and presented on a custom stand. Its current owner, a professional art expert in London, obtained the artwork from an old British collection that was formed in the 1970s. Estimate: £6,000-£8,000 ($7,800-$10,400). The Buddha at center seated in dhyanasana upon a pedestal with his arms folded in his lap, the face with downcast eyes, flanked by adoring attendant figures dressed in robes with finely incised folds, all within a pointed arch with floral and dentilated bands, flanked by two eagle heads, on custom stand.

Sculpted to a very high standard, a rare Gandhara grey schist head of Shayamuni Buddha exhibits sensitively detailed facial features, including an aquiline nose, half-closed eyes, incised pupils and a thin, hemmed mouth. The forehead is adorned with an urna, and the wavy hair is styled in a prominent usnisha on the top of the skull. A pleasing combination of classical carving traditions and Buddhist art, the 16.14 by 7.08in sculpture is expected to make £5,000-£7,000 ($6,500-$9,100). 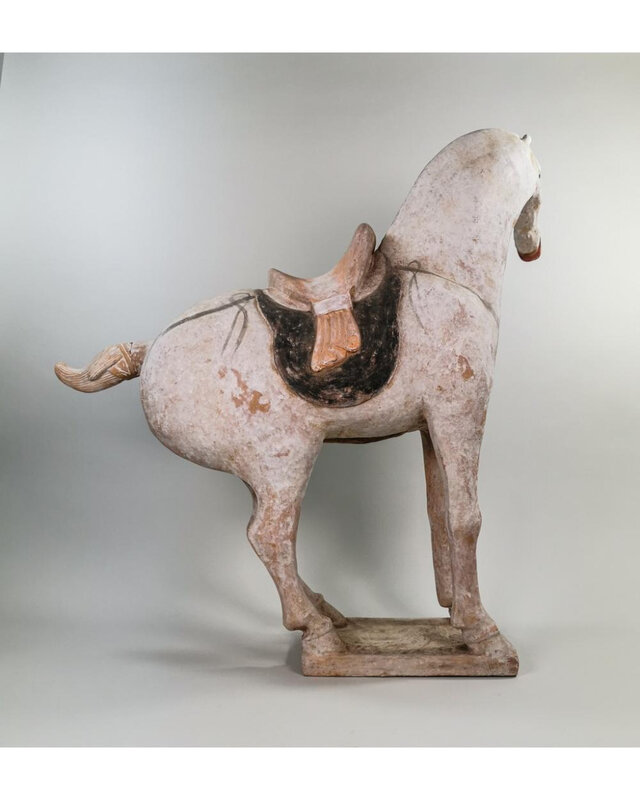 standing with one front foot up, mounted with saddle and elaborate blanket decorated with swirl accent; with much original slip remaining.

Provenance: From an old British collection of Asian Art formed in the 1990 on the UK and European art market.

A fine example of Chinese Tang dynasty art, a lifelike traditional ceramic depiction of a “fat court lady” holding a baby displays well preserved original pigments. Made circa 200 B.C. to 200 A.D., the 18.11- by 4.72-inch figure has been TL tested and confirmed authentic by Ralf Kotalla Laboratory. With provenance from a London private collection formed in 1970s, it carries a £2,500-£3,000 ($3,250-$3,900) estimate. A ceramic figure of a female, hair in an elaborate style with top-knot in the form of crescents, hair arranged to the sides; painted details to the face; wearing long robe falling to the feet, sleeves covering hands; both arms supporting a napping infant; pigment to the surface of both figures.

Provenance: Private London collection, formed in the 1970s on the UK and European art market.

A highlight of the Ancient Roman section is an attractive marble relief figure of a dancing nymph or muse that measures 7.6 by 3.3 inches. Finely carved, the figure is distinguished by its thick, flowing “hair” and free-spirited pose. Once part of a British private collection formed in the 1980s, it will be offered with a £1,200-£1,600 ($1,600-$2,080) estimate. 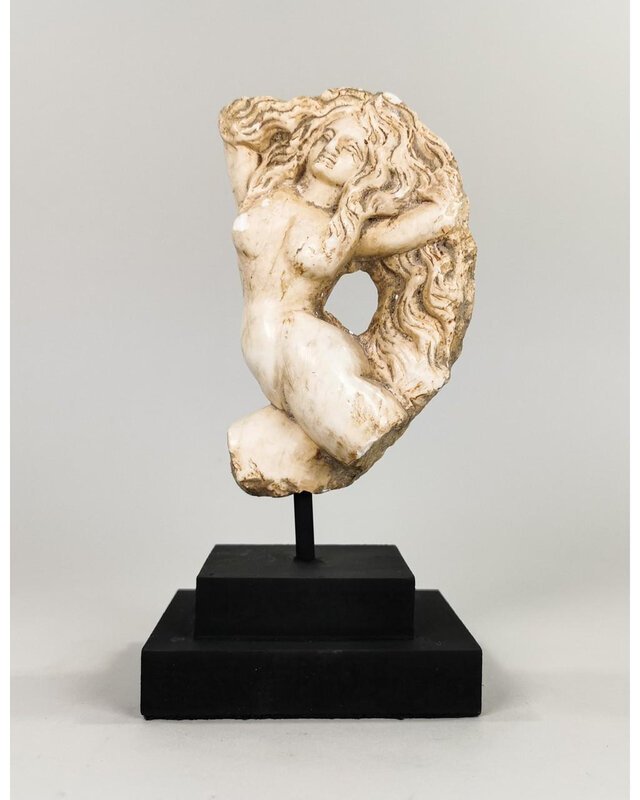 Provenance: Property of a central London Ancient Art Gallery; previously obtained from a British private collection formed in the 1980s.

Another Roman artwork of note is a rare, circa 200 A.D. sandstone head of Medusa with stylized serpents at its sides. “Although frightening, such carvings were often placed at the entrances of Roman villas or temples to repel bad spirits and evil creatures. The symbol was used more as a talisman for protection than actual horror figure,” Dr Bonchev explained. Measuring 10 by 9.4 inches on its included custom stand, the well provenanced carving is estimated at £2,500-£3,000 ($3,250-$3,900). depicted with closed mouth and staring eyes; stylised serpents to the sides of the head, on a custom stand.

Provenance: Private collection of an Oxford professional, formed in the 1970s-1990s on the UK art market.

Endlessly fascinating, body armor and helmets worn by soldiers in ancient times are rarely found in museum-worthy condition, but that is the standard seen in two particular helmets entered in the February 1 auction. A highly prized circa 400 B.C. Greek Chalcidian Hoplite helmet with distinctive cheek-guards is of a type that was used by Alexander the Great’s army. With provenance from an old British collection, the professionally mounted relic could command a winning bid of £15,000-£25,000 ($19,500-$32,500). with cheek-guards on a custom made stand; some professional restoration.

The Chalcidian helmet was popular in Greece in the fifth and fourth centuries BC, as well as the southern parts of Greece that were colonized by the Greeks. The helmet appears to have been a development of the Corinthian helmet, but with improvements in design which gave the wearer better hearing and vision, resulting in a lighter and less bulky helmet. The helmet would commonly have a hole pierced on each cheek piece or elsewhere in order to accept an inner lining which was made of leather; adornments, such as combs of horsehair, were usually placed on the top of the helmet. By the time of Alexander the Great the helmet was still worn by soldiers, most notably the hoplites, the heavy infantrymen who carried long spears; the helmet would later go on to develop into the Attic helmet which is iconic of Classical soldiers.

The second featured helmet conjures images of 9th-century Danish king Ragnar Lothbrok and his eldest son, the cruel and ferocious Viking chieftain Ivar the Boneless. “They would fight and invade using the same type of riveted four-plate iron helmet as the one we are auctioning,” Dr Bonchev said. Dated circa 900-1000 A.D., and with provenance from an old British collection, it is estimated at £5,000-£7,000 ($6,500-$9,100). A helmet fabricated from four triangular iron plates curved to conform to the human head; riveted construction; with bands inside and outside supporting the structure of the helmet; perforated rim for the attachment of a mail aventail. Helmets of this type were once common across Europe in the post-Roman world through to the later Middle Ages. The relatively straightforward construction methods made them ideal for production in quantity for the armies of the emergent states of Europe and elsewhere; with restoration/bands, rivets and internal support.

Provenance: From an old British collection, acquired on the UK art market in the 1980s.

A full complement of sumptuous – and wearable – ancient jewellery includes rings, bracelets, necklaces, pendants and brooches, many of them set with precious gemstones. A large, solid-gold medieval (circa 1200 A.D.) Crusader’s bracelet weighing 40 grams is designed with flat terminals marked with Maltese crosses. “Solid-gold bangles of this type are particularly rare, and the Maltese crosses suggest ownership by a high-status knight or priest,” Dr Bonchev noted. The auction estimate is £6,000-£8,000 ($7,800-$10,400). Around 200 A.D., a talented Roman engraver recounted the Greek mythological tale of Leda and the Swan through a carved amethyst intaglio set at the center of a gold Roman legionary ring. Previously part of a British private collection formed in the last quarter of the 20th century, it now comes to auction with a £3,000-£4,000 ($3,900-$5,200) estimate. oval-shaped hollow hoop; elliptical bezel with amethyst stone depicting Leda and the Swan.Leda and the Swan is a story and subject in art from Greek mythology in which the god Zeus, in the form of a swan, seduces Leda. According to later Greek mythology, Leda bore Helen and Polydeuces, children of Zeus, while at the same time bearing Castor and Clytemnestra, children of her husband Tyndareus, the King of Sparta.

The depiction in this ring has been found in a famous Pompei fresco wall.

Provenance: Property of a professional Ancient art and jewelry expert; previously with a London gallery; initially from a private British collection formed in the 1970-1990.