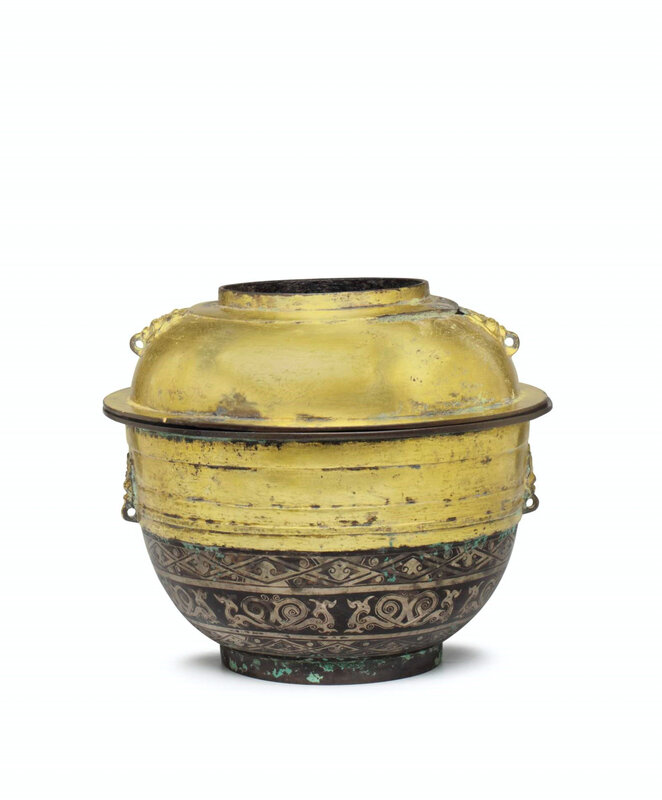 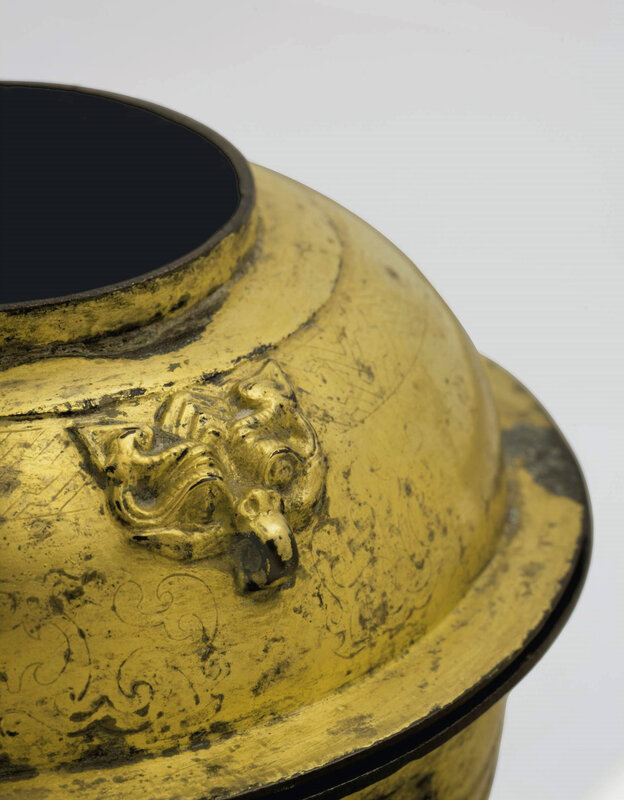 The three vessels, a bottle (hu), a steamer (xian) and a bowl (jian) are finely inlaid in silver with bands of stylized bird scrolls set between decorative borders, the silver decoration forming an attractive contrast to the dark patina of the bronze. The foot and slender neck of the hu, which rises to a garlic head mouth, are richly gilded. The xian is made in two sections: the upper section has the inlaid decoration on the lower body while the upper body is gilded and flanked by a pair of taotie mask handles; the lower section has a pair of similar mask handles on the gilded, rounded shoulder that is incised with confronted felines, and separated by an encircling flange from the plain lower body. The jian is inlaid around the sides, while the shoulder, shallow waisted neck and everted rim, as well as a pair of loop handles, are gilded.

Note: This remarkable group of vessels displays stylistic and technical influence of the Chu Kingdom on the southern regions of China at the end of the Warring States period. The present group is discussed at length by Emma C. Bunker in 'A Group of Three Highly Important Chinese Inlaid Bronze Vessels, Late Warring States-early Western Han Periods', Ancient Chinese Inlaid Bronzes, Late Warring States-early Western Han Periods, Bluett & Sons, 1989, pp. 7-14, and was the subject of extensive technical analysis by W.T. Chase of the Arthur M. Sackler Gallery and the Freer Gallery of Art, Dr. Peter Northover of Cambridge University, and Dr. Nigel Seeley of the Institute of Archaeology, London University. Their findings revealed a newly discovered use of silver amalgam in the inlay process. In his report on the bronzes, W.T. Chase describes the process as follows:

"The grooves for the inlay were prepared by cutting into the cast bronze. Chisel-marks can clearly be seen where the inlay is missing, and the inlay continues right across the chaplets or casting spacers in the body. After the grooves were chiseled out, a coat of gold amalgam was put in, and fired but not burnished. Perhaps this was to supply 'tooth' so that the silver would adhere. Next a coat of silver amalgam was put in the grooves and fired. The grooves were probably overfilled; after the second firing and burnishing, the whole body was tooled abrasively to smooth it and to make the inlay flush with the bronze. It may have been reburnished after tooling."

As noted by Bunker, ibid., p. 7, all three vessels represent a classic, restrained form enlivened with gilded surfaces and silver-inlaid designs reflecting the influence of contemporaneous lacquer painting and silk weaving. The dominant zoomorphic motif shared by the group is the pairs of addorsed stylized birds with "co-mingled" tails, the ancestry of which, according to Bunker, ibid., p. 14, can be traced back to the fabulous crested birds on Western Zhou bronzes such as the zun illustrated by T. Lawton et al., The Inaugural Gift: Asian Art in the Arthur M. Sackler Gallery, Washington DC, 1987. Their fluid, calligraphic representation on the present three vessels recalls painted examples seen in Chu lacquer, such as the lacquer coffin from Baoshan, Jingmen, Hubei province, illustrated by Teng Rensheng, Lacquer Wares of the Chu Kingdom, Hong Kong, 1992, pp. 58-59, no. 61, where line drawings of further stylized birds are illustrated on p.131, figs. 80 and 81. Of particular note is the phoenix illustrated as fig. 81:1, which features a bi-pronged beak somewhat similar to those of the birds featured in the wide, central band of the present hu.

The bands of geometric forms and volutes decorating the shoulder and lower neck of the hu recall designs on Chu lacquers, such as a lacquer yi washer with phoenix-head spout from Hubei, and a hu from Changtaiguan, Xiayang, Henan. See Teng Rensheng, ibid., pp. 38-9, nos. 33 and 35, respectively.

As a form, the long-necked hu with lobed, bulb mouth is frequently found in southern tombs of the Qin and Han periods. An interesting feature of the present vessel is the vertical loop cast on the base, which may have been intended to suspend a small bell, such as that seen on the base of an early Western Zhou gui in the Shanghai Museum illustrated by J. Rawson, Western Zhou Ritual Bronzes from the Arthur M. Sackler Collections, vol. IIB, Arthur M. Sackler Foundation, 1990, p. 422, fig. 52.7. Bunker proposes an alternative possible purpose for the loop, ibid., p. 11, that it may have facilitated the suspension of the vessel in order to drain it after use.

According to the Zhouli (The Rites of Zhou), the jian was intended to hold both wine and warm food in sacrificial rites. A Han/Six Dynasties-period bronze vessel of similar shape, but described as a fu, from Jiangjuncun Cemetery, Zhonxian, Chongqing Municipality, was found together with a bronze tripod support, suggesting how vessels of this type may have originally functioned in antiquity. See Kaogu, 2011:1, pl. 11, fig. 4, and p. 45, fig. 16, no. 1 (line drawing).

According to Bunker, ibid.,, p. 14, the continuous pattern of horizontal zigzags and short volutes in the upper and lower registers of the present jian, and those seen on the xian steamer, are compatible with woven textile designs of the late Warring Sates period, such as those from Mazhuan, Jiangling, Hubei province. See Zhongguo Meishu Quanji, Gongyi Meishu bian, Textile, Part 1, 1985, nos. 11 and 12.

In her discussion of the xian, Bunker, ibid., p. 9, explains that the choice to inlay in silver amalgam only the bowl-shaped steamer section of the present xian and not the rounded boiler section, was one of practicality, as exposure to the excessive heat would have caused the inlays to pop out due to the differential expansion of the metals. Instead, the artisan chose to embellish the surface of the steamer section with incised designs of confronted foliate felines with curled-up snouts. As noted by Bunker, ibid., p. 9, the creatures share similarities with those inlaid in copper sheet on the guan fou from the Tomb of the Marquis Yi of Zeng in Sui Xian, Leigudun, Hubei province. That tomb can be precisely dated to the 5th century BC by the presence of bells inscribed with a date corresponding to 433 BC. The fluid, calligraphic manner of their rendering also recalls painted examples in Chu lacquerwork, as can be seen in a line drawing of a very similar feline creature depicted on a tomb guardian from Tianxingguan, Jiangling, illustrated by Teng Rensheng, Lacquer Wares of the Chu Kingdom, Hong Kong, 1992, p. 125, fig. 58.

Bunker notes, ibid., pp. 7-8, "when not in use, other than as a status object to be admired, the steamer appears as a covered bowl (dui) with the boiler section resting inside the steamer element. When needed for cooking, of which there is ample physical evidence in the corrosion material, the footrim of the steamer element fitted snugly over the round mouth of the boiler, which, in turn, was placed in a hemispherical depression on a now missing stand or stove. When completely assembled, the wide collar around the boiler served to stabilize the top-heavy structure produced by placing the steamer section above the boiler. Handling was facilitated by four missing ring handles once suspended from four sculptured taotie masks. An openwork grate contained within the footrim of the upper steamer element allowed steam to penetrate the food in much the same way as modern steam-cookers do today."

A xian steamer of similar construction to the present example, but lacking the gilt and silver-inlaid designs, and of slightly later date, from Shouxian in Shaanxi province, is illustrated in Wenwu, 1987:6, p. 19, fig. 46:4 and p. 29, fig. 56. See, also, the similar, yet unadorned Six Dynasties example from Jiangjuncun Cemetery, Zhonxian, Chongqing Municipality illustrated in Kaogu, 2011:1, pl. 10, no. 2.