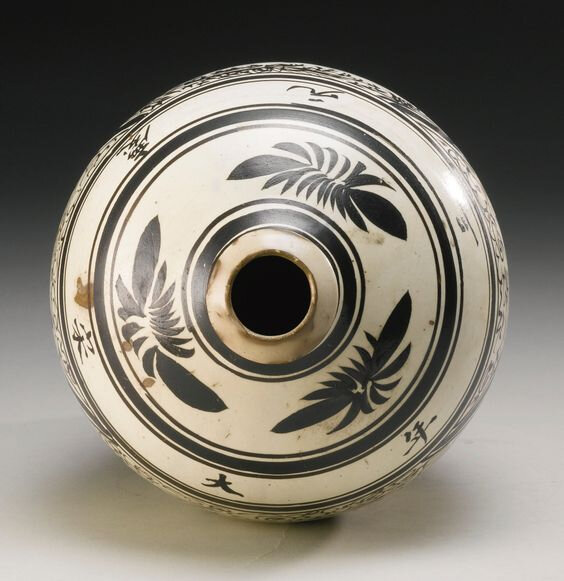 of slender ovoid form, the gently rounded shoulder rising to a small neck with conical mouth, exquisitely decorated with a wide band of two freely painted reserves depicting the 'Three Friends' (sui han san you), one panel of two scholars conversing in a garden, the reverse with the third scholar standing by a pine tree entwined with bamboo and prunus, below inscribed characters da song qingyuan san nian [third year of the Qingyuan of the great Song] corresponding to the year 1197, a band of further abstracted flowers above, repeated around the base, the foot ring unglazed revealing the buff-colored body, Japanese wood box (2).

Property from the Estate of Dr. and Mrs. Richard Eckhardt.

Provenance: Acquired in Japan between 1947 and 1952 and thence by descent.

Note: It is very rare to find a vase of this type with an inscribed date. 1197 corresponds to the third year of the Qingyuan emperor; a reference to the first of three era names taken by the Ninzong emperor whose reign lasted from 1195-1224. Compare a vase with figures and an inscription zhong xiao jie yi also attributed to the Yuan dynasty, formerly in the Arthur M Sackler Collection, sold at Christie's New York, 18th March 2009, lot 329.