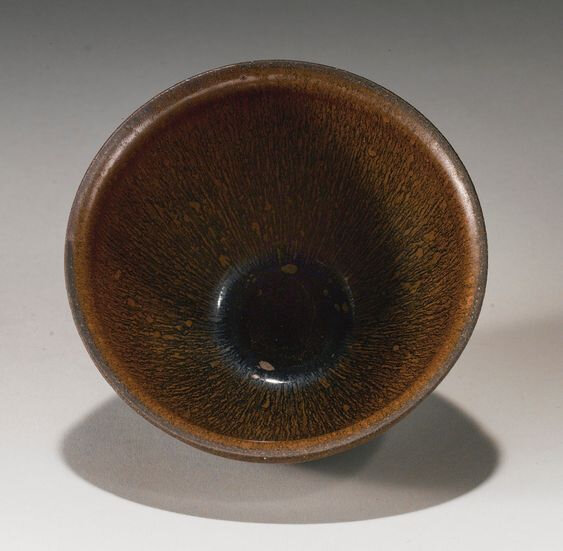 of deep rounded form with steep gently curved sides rising from the short foot to the slightly indented rim, covered inside out with a lustrous dark bluish-black glaze with fine reddish-brown streaks, radiating from the core with similar streaks on the exterior, pooling in petal-shaped loops above the foot to reveal the purplish-brown body, the base marked san.

Note: The inscription on the base of this bowl reads san (three). See another bowl, its base inscribed with two characters that could be read sanshiliu (thirty-six), sanshijiu (thirty-nine) or sanshi da (thirty large), from the kilns at Shuiji, Jianyang county, Fujian province, and now in the Arthur M. Sackler Museum, Harvard University of Art Museums, Cambridge, Mass., illustrated in Robert D. Mowry, Hare's Fur, Tortoiseshell, and Partridge Feathers, Cambridge, Mass., 1995, p. 211, pl. 77, where the author notes that 'the exact significance of the inscription is unknown, although they are assumed to be potters' marks relating to the operation of the kilns, the ownership of individual pieces, or the distribution of the wares after firing.' James Marshall Plumer in Temmoku. A Study of the Ware of Chien, Tokyo, 1972, p. 73, suggests that numerals may refer to a particular kiln or to the precise location within a kiln where the bowls would be fired. 'The variations in glaze color, glossiness, streaking, and texture, presuppose different results in different areas of the kiln.' ibid., p. 73.