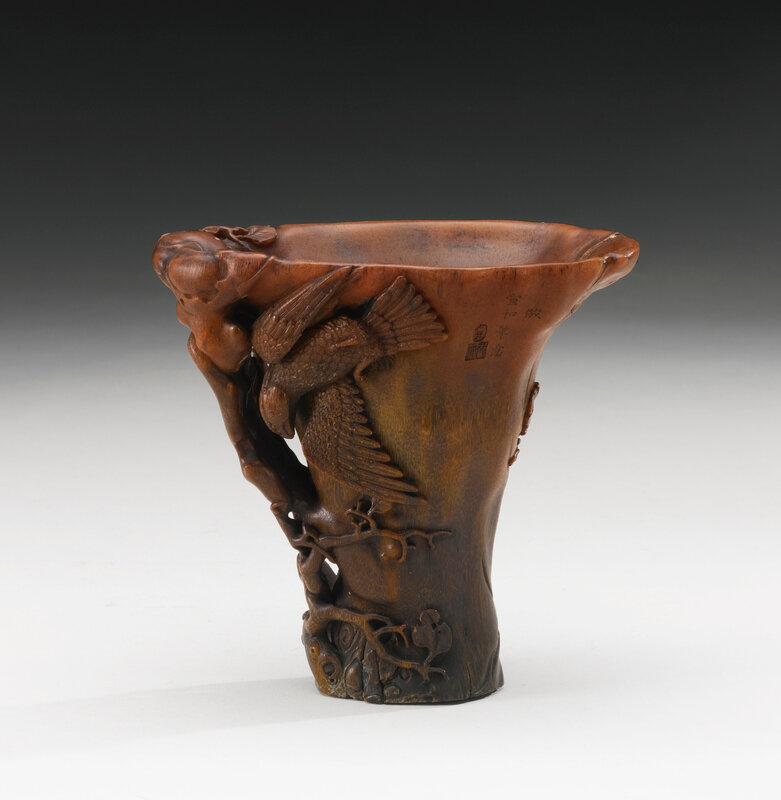 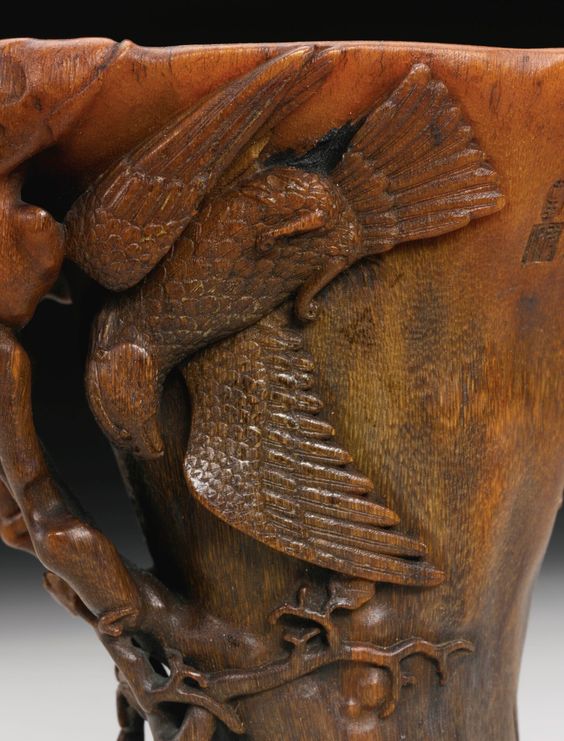 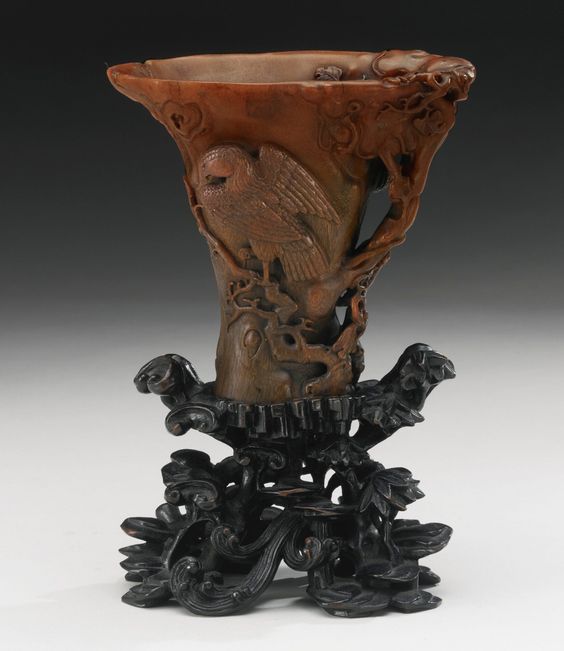 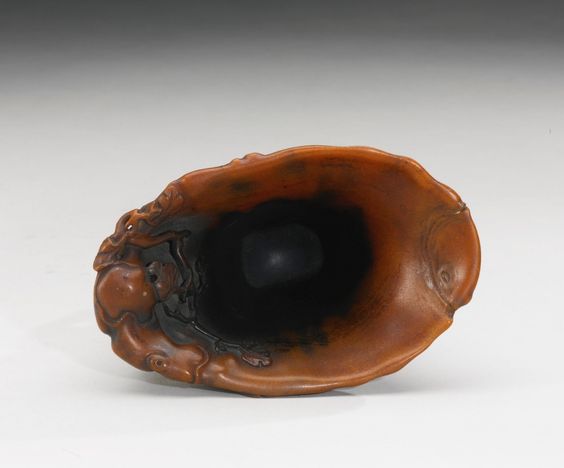 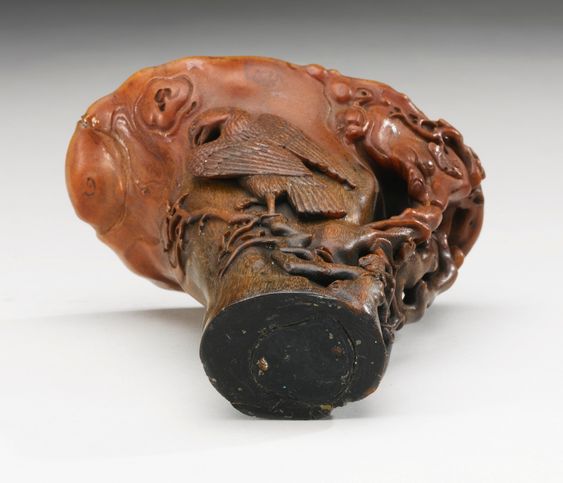 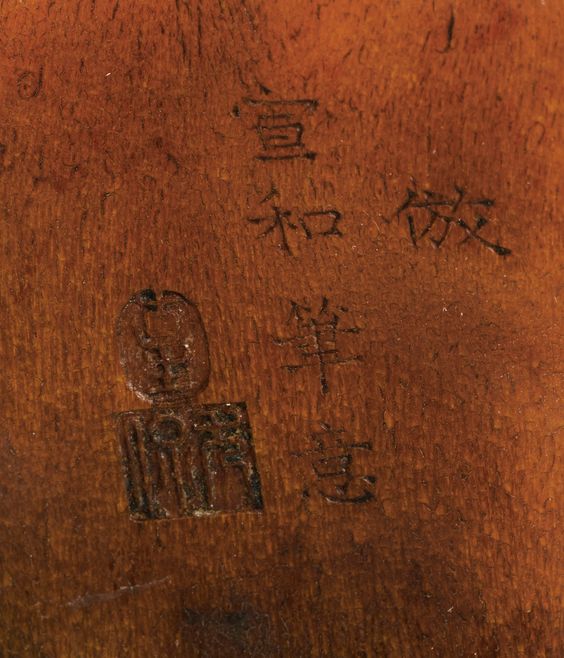 the tall horn superbly carved in high relief as a pair of hawks by a gnarled tree with branches growing from the sides of a mountain ledge, several entwined branches forming the handle, and a few leafy twigs extending over the rim, one hawk perched on a small branch that extends round the side, the other in flight with legs drawn up and wings outstretched, the feathers finely incised, inscribed with a five-character inscription reading fang Xuanhe biyi, followed by an oval seal reading Zhi Sheng and a square seal reading You Kan, the material of a honey tone darkening towards the tip and with an extremely smooth patina, fitted wood stand (2).

Note: The inscription on the present cup may be translated as 'in the style of Xuanhe', and is a reference to the paintings of the Song dynasty emperor Huizong, whose reign title was Xuanhe, and reveals the stylistic influence on the carver's work. The primary subjects of Xuanhe's paintings were birds and flowers, with the one titled Yu ying tu, Taming the Hawk, well known for its depiction of a single bold white-feathered hawk perched on a wooden pole. The two hawks on the present vessel are similarly strong and majestic. They dominate the design with power and supremacy. The bareness of the tree further enhances the prominence of the main subject matter - the overall composition is creative with an effective use of space. This type of composition is recognizably in the tradition of Xuanhe whose work the carver must have admired and tried to emulate.

Birds of prey such as hawks, ying, in Chinese design represent the hero, yingxiong, as its name is homophonous with the character for hero. Furthermore, a flying hawk conveys the message for attaining a journey of ten thousand miles which is a wish for a long and successful career.

The present rhinoceros horn cup, which bears the name of the 17th century master carver You Kan, is striking for its unusual subject matter and bold manner of carving.

You Kan's works are well known and documented  -  there are more  pieces bearing his name than the name of any other rhinoceros horn carver. Amongst these pieces, those depicting hawks are rare and no other similar work by You Kan appears to be recorded. There is a possibility that the seals bearing You Kan's name were added later to the present lot in homage to this great master carver.

According to Jan Chapman, You Kan was a palace carver active during the period circa 1650-1720. He was extremely versatile with his designs and his technique is described as careful and conscientious with an emphasis on realism especially when depicting flowers and animals. The sophistication of his work is expressed in the skillful use of the material and in the spacing of the design which frequently takes advantage of the organic form and fibrous inclusions of the material. See Jan Chapman, The Art of Rhinoceros Horn Carving in China, London, 1999, p. 139.

Three rhinoceros horn cups bearing You Kan's signature can be found carved with images of chicken. One in the Palace Museum, Beijing, illustrated ibid., pl. 250, formerly in the collection of Dr. Ip Yee; one sold at Christie's Hong Kong, 1st November 2004, lot 951; and the third cup sold in these rooms, 19th March 2007, lot 373.

An unsigned cup depicting two hawks strategically placed to take advantage of the material's organic form, one bird standing on a pine branch while the second depicted in flight with wings outstretched and feet drawn towards the body is possibly the closest related example recorded to the present piece. This cup, described by its former owner, Edward T. Chow, as 'only the hand of a renowned master could have made this extremely forceful yet fine carving', was sold in our Hong Kong rooms, 8th April 2011, lot 2718.