LONDON.- The Foundling Museum is presenting the first major exhibition to explore representations of the pregnant female body through portraits from the past 500 years, Portraying Pregnancy: From Holbein to Social Media which opened on 24 January 2020.

Until the twentieth century, many women spent most of their adult years pregnant.

Despite this, pregnancies are seldom made apparent in surviving portraits. This exhibition brings together images of women – mainly British - who were depicted at a time when they were expecting (whether visibly so or not). Through paintings, prints, photographs, objects and clothing from the fifteenth century to the present day, Portraying Pregnancy explores the different ways in which pregnancy was, or was not, represented; how shifting social attitudes have impacted on depictions of pregnant women; how the possibility of death in childbirth brought additional tension to such representations; and how more recent images, which often reflect increased female agency and empowerment, still remain highly charged.

This exhibition is the first of its kind and provides an exceptional opportunity to situate contemporary issues of women’s equality and autonomy in a 500-year context.

The earliest portrait featured in the exhibition - and a major highlight - is Hans Holbein II’s beautiful drawing of Sir Thomas More’s daughter, Cicely Heron, made in 1526-7, lent by Her Majesty The Queen from the Royal Collection. Sketched from life, it is a rare, clear-eyed, observation of a pregnant woman. In many pre-twentieth-century works in the exhibition, however, the sitter’s pregnancy has been edited out. The mezzotint made after Sir Joshua Reynolds’s full-length portrait of Theresa Parker, for example, shows no visible sign of her pregnancy, in line with conventions of the time, despite rich documentary evidence that by her second sitting in February 1772, Theresa was heavily pregnant. 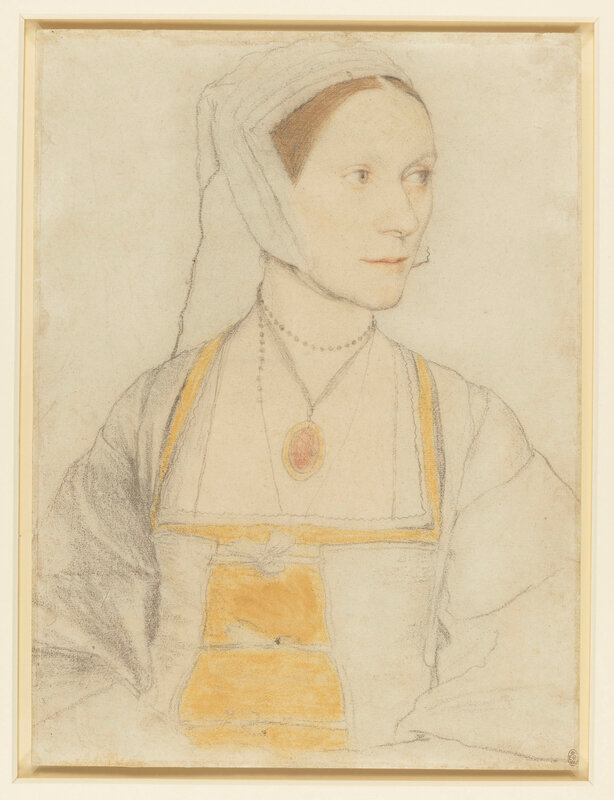 Today, women with access to birth control can expect to plan if, or when, they become pregnant. Prior to the 1960s, many women would have experienced, between marriage and menopause, a number of pregnancies – and their daily lives might alter little for most of the gestation period. This is exemplified in a portrait of the celebrated eighteenth-century actress, Sarah Siddons, shown in the role of Lady Macbeth, which she famously played up until the final weeks of pregnancy. Fear of dying in childbirth was very real, and often justified. Until the early twentieth century, most births took place at home, often attended by family members, and consequently many women witnessed death in childbirth. Elizabethan and Jacobean portraits of visibly pregnant women, such as Marcus Gheeraerts II’s portrait of a heavily-pregnant Unknown Woman, dated 1620, appeared in the same era as the ‘mother’s legacy’ text – in which a woman wrote a ‘letter’ for the benefit of her unborn child, in case she should not survive her confinement. An example is the manuscript that the well-educated Elizabeth Joscelin wrote in 1622 for the child that she was carrying. Maternal mortality is also powerfully represented by George Dawe’s 1817 portrait of the pregnant Princess Charlotte, the heir to the British throne, wearing a fashionable loose ‘sarafan’ dress, as well as by the actual surviving garment, lent by Her Majesty The Queen from the Royal Collection, which will be displayed alongside it. Charlotte died in childbirth, in November that year. Marcus Gheeraerts II, Portrait of a Woman in Red, 1620 © Tate While Christianity played a central role in everyday life, conceiving a baby (or not), was seen as a gift from God. Historically, the New Testament story of The Visitation – the meeting of the pregnant Virgin Mary and her cousin, Elizabeth – was a particularly inspiring and comforting one for pregnant women. Images of it had been widespread in England prior to the sixteenth-century Reformation, and reappeared in the late nineteenth and early twentieth centuries. The Pre-Raphaelite artists’ doctrine of absolute realism saw them model their depictions of it on pregnant women among their own social circle.

Augustus John’s c.1901 full-length portrait of his wife, Ida, must have seemed astonishingly transgressive to viewers at the time, as it clearly depicts her as pregnant. It was not until the later twentieth century that pregnancy stopped being ‘airbrushed out’ of portraits. In 1984, the British painter, Ghislaine Howard, produced a powerful self-portrait of herself as heavily pregnant. However, the watershed moment occurred internationally in August 1991, when Annie Leibovitz’s photographic portrait of the actress, Demi Moore, naked and seven months pregnant, appeared on the cover of Vanity Fair magazine. This image was considered so shocking that some retailers refused to stock the issue. Nevertheless, it marked a culture shift and initiated the trend for more visible celebrations of pregnant bodies – especially nude ones. In 2017, Leibovitz returned to the theme, photographing the pregnant tennis champion, Serena Williams, naked, for Vanity Fair’s August cover. The final photograph in the exhibition, by Awol Erizku, was commissioned by the singer, Beyoncé Knowles, who posted it on Instagram on 1 February 2017. Erizku’s iconographically complex portrait of Beyoncé, pregnant with twins, veiled and kneeling in front of a screen of flowers, became the most liked Instagram post of that year. Beyoncé’s image powerfully demonstrates how some women have succeeded in taking ownership not just of representations of their pregnant bodies, but also the distribution of their portraits. This exhibition, curated by Karen Hearn, previously the curator of sixteenth and seventeenth century British art at Tate Britain (1992-2012) and now Honorary Professor at University College London, is the first of its kind and provides an exceptional opportunity to situate contemporary issues of women’s equality and autonomy in a 500-year context; it forms part of the Foundling Museum’s ongoing programme of exhibiting art that reflects its mission to celebrate the power of individuals and the arts to change lives. 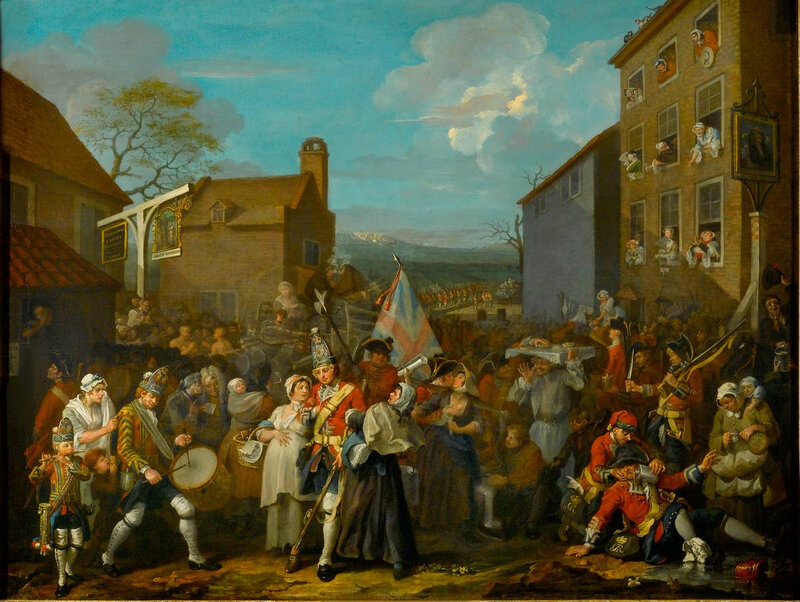 William Hogarth, The March of the Guards to Finchley, 1750. © The Foundling Museum 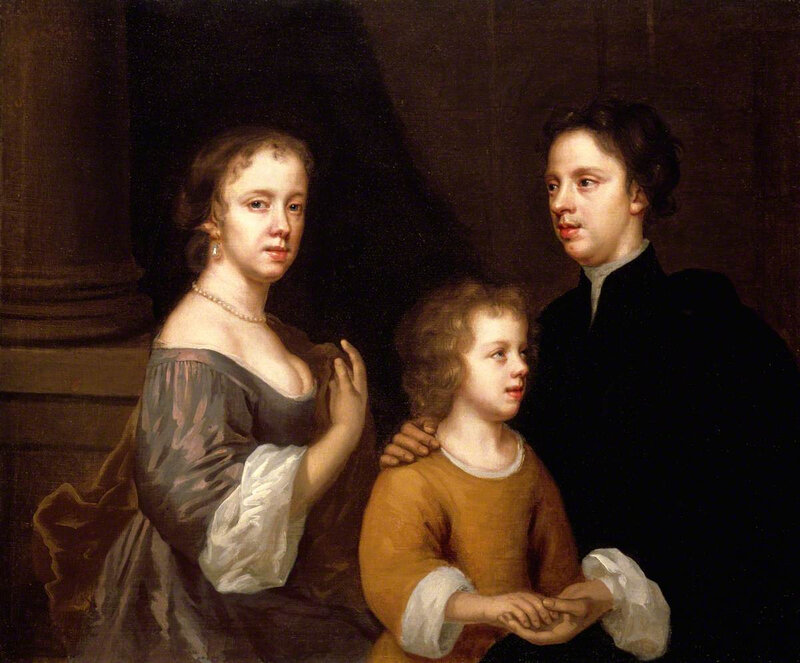 James-Gillray, And wouldst thou turn the vile reproach on me, 1807, private collection.