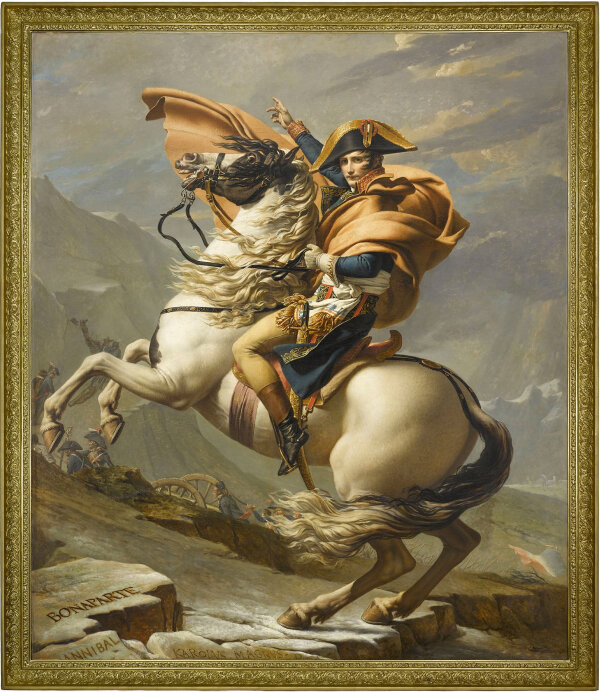 BROOKLYN, NY.- The Brooklyn Museum is presenting Jacques-Louis David Meets Kehinde Wiley, an exhibition pairing an iconic painting from the Museum’s collection—Kehinde Wiley’s Napoleon Leading the Army over the Alps (2005)—with its early nineteenth-century source image: Jacques-Louis David’s Bonaparte Crossing the Alps (1800–1). By displaying the two paintings together, in dialogue with each other for the very first time, the exhibition explores how ideas of race, masculinity, representation, power, and agency have played out across the history of Western portraiture. The presentation is organized by the Brooklyn Museum in collaboration with the Château de Malmaison, where the original version of David’s portrait is permanently displayed. Before traveling to the Brooklyn Museum, the two paintings were on view at the Château de Malmaison.

David’s famous portrait was commissioned in 1800 by King Charles IV of Spain in an effort to win the favor of Napoleon Bonaparte, who was then First Consul of France. In the two centuries since its commission, Bonaparte Crossing the Alps has inspired numerous interpretations, but none seem to resonate in contemporary culture as much as Wiley’s large-scale version. In his Napoleon Leading the Army over the Alps, Napoleon is replaced with a Black man wearing camouflage fatigues and Timberland boots. By combining the role, stature, and implied historical legacy depicted in Bonaparte Crossing the Alps with visual markers of status from contemporary African American culture, Wiley challenges the art historical canon, critiquing how it has routinely overlooked the collective Black cultural experience.

David posed Napoleon in the tradition of equestrian portraits of historical commanders like Hannibal and Charlemagne, amplifying the grandeur of the portrait, which commemorated the First Consul and Reserve Army’s expedition through the Great Saint Bernard Pass, in the Alps. In the painting, Napoleon leads his soldiers from atop a rearing steed; in actuality he made this journey on the back of a mule. This is just one example of how Bonaparte Crossing the Alps constructed a strategic image of the General as a triumphant military leader while departing from historical accuracy. Kehinde Wiley (American, born 1977). Napoleon Leading the Army over the Alps, 2005. Oil on canvas, 108 x 108 in. (274.3 x 274.3 cm). Brooklyn Museum, Partial gift of Suzi and Andrew Booke Cohen in memory of Ilene R. Booke and in honor of Arnold L. Lehman, Mary Smith Dorward Fund, and William K. Jacobs, Jr. Fund, 2015.53. © Kehinde Wiley. Photo: Brooklyn Museum.
In Wiley’s interpretation, the artist replaced the Italian mountainside and ready infantry with a detailed background flooded with sperm cells. To this ensemble, he added an ornate gilded frame with testicular-shaped cartouches in each corner and crowned by a carved self-portrait emerging from yonic volutes. The result transforms and challenges the grand tradition of historical portraiture established by artists like David, calling attention to the long-standing blind spots of canonical Western painting and the need to redress historical biases. The work belongs to an ongoing series of Wiley’s titled Rumors of War, begun in 2005, which includes the artist’s latest work of the same name: a monumental equestrian bronze statue in New York’s Times Square, which was unveiled in September 2019 and is now in the collection of the Virginia Museum of Fine Arts.

Jacques-Louis David Meets Kehinde Wiley at the Brooklyn Museum marks the first display of David’s portrait in New York, and the first time the two works have been on view together in the United States. To highlight this important occasion, Wiley collaborated with the Brooklyn Museum on the exhibition design for the U.S. presentation. A video showing Wiley on the grounds of Malmaison also accompanies the project, incorporating the artist’s perspectives on how the Western canon, French portrait tradition, and legacies of colonialism influence his own practice. When displayed together, these two works highlight the importance of re-examining representations of power across two centuries and two cultural contexts.

The exhibition also features a selection of complimentary works by Wiley, including a small-scale version of the artist’s recent monumental equestrian statue, Rumors of War. Also on display is Houdon Paul-Louis, a 2011 bust by Wiley that is part of the Museum’s collection. Several works from the Museum’s collection are also on display to provide historical context for Napoleon, including a small bronze equestrian portrait by Antoine-Louis Barye, medals struck by the Emperor to commemorate his achievements, and British prints brutally satirizing him.